What rattlesnakes are found around San Diego?

In our area, the only venomous snakes are rattlesnakes. In the coastal and mountain regions of San Diego County there are three kinds: the Western Rattlesnake, the Speckled Rattlesnake , and the Red Diamond Rattlesnake . In the desert is the Sidewinder.

How do you tell if a snake is venomous?

First of all, if you don't know, leave it alone. Second, even if you do know, leave it alone. You can't tell if a snake is venomous just by looking at it unless you are familiar with the characteristics of different types of snakes. In the United States, there are 4 major types of venomous snakes: rattlesnakes, water moccasins, copperheads, and coral snakes. In other countries there are other kinds as well. But all snakes will bite if threatened. The vast majority of all snakebites, venomous or otherwise, occur when someone tries to capture a snake. Get a good field guide with color pictures, written for the area you are exploring or visiting, before you head out. Study it ahead of time, and learn the characteristics of the snakes you are likely to see.

How do I recognize a rattlesnake? 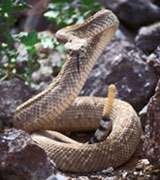 The main features of rattlesnakes include:

As you can see, picking out most of these characteristics requires being close to the snake. This is why we suggest that you leave any strange snake alone.

Does a rattlesnake stay in one area or move from place to place?

Rattlesnakes have home ranges, but they do not defend them as a territory. Generally, a home range is the area that an animal will spend most of its time acquiring resources and seeking mates. Rattlesnakes will not stand guard over them and fight other rattlesnakes for the control of an area. A rattlesnake will use a hole, or other refuge, as a place to rest, but when the resources are reduced (the rodents are eaten up) it will move on to greener and more rodent-filled pastures (but, within its home range). Because the density of rattlesnakes is dependent on the resources (how many hiding places and how many rodents), there generally aren't a whole lot of them in any one area. A countermeasure against rattlesnakes is to remove their food source and hiding places (exterminate the rodents from your yard and remove the hiding places, such as wood piles). If you live adjacent to a wilderness area, please leave the habitat untouched. The rattlesnakes are serving as nature's own way of controlling the native rodent populations.

Do rattlers get a new rattle every year when they shed?

Rattlers get a new rattle segment each time the snake sheds its skin which is normally about 3-4 times per year. Baby rattlesnakes are born with only one segment on their rattle called a button. The rattle is noiseless until the baby rattler sheds its skin for the first time and adds another segment to the button. The rattle makes noise when the segments click against each other. If the snake is able to find a fair amount of food and grow well, it will shed its skin as much as 4 times a year, each time adding a new segment. By using this as an estimate, one could gain a *rough* estimate of the snake's age in years. However, snake rattles do sometimes break off, due to wear and tear. And the number of times the snake sheds is variable according to conditions, so it would only be an estimate.

If someone is bitten by a rattlesnake, does this mean they're going to die?

No. Today, there are only a few cases of death as the result of a rattlesnake bite. The medical treatment of bites is greatly improved. A person bitten by a rattlesnake should make a full recovery without lasting effects provided that medical treatment is found immediately. Seek medical attention immediately. Visit the California Poison Control Center at San Diego's UCSD Medical Center for further information.

Is there any way I can keep snakes out of my yard?

There is no substance that you could use to repel rattlesnakes that would not also have adverse effects on children, pets, and wildlife. Unfortunately, some people suggest lime powder (=caustic lye), but that is bad advice. It is quite caustic and can seriously injure children and animals -- including any wildlife that comes into contact with it. Some scam artists sell worthless substances (ropes, gels, powders) that they claim are snake deterrents. The truth is that there is no such substance.

You can try to discourage snakes by removing sources of food near your house. Try to keep the rodent population down by cleaning out prime rodent habitat: sheds, woodpiles, underbrush. Left alone, rattlesnakes help control the size of the rodent populations and are themselves preyed on by animals that you may like, including roadrunners.

Common sense is the best defense. Cultivate an attitude of alertness. The more you know about snakes and how they live, the more aware you will be of where you would expect to encounter them. Please read the next question and answer.

Read more in our recent rattler story: San Diego's Rattlesnakes, and What to Do When They’re on Your Property