One striking result of the study is that almost every pattern of response imaginable is exemplified by some species or another. Some species take advantage of burned areas. 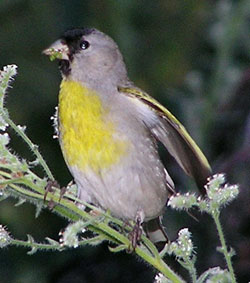 These include the Mourning Dove, Northern Mockingbird, and Rock Wren.

We found Rock Wrens nesting in rock outcrops and in burrows in bare ground in areas formerly covered by thick chaparral that was quite unsuited to them before the fire. Their numbers dwindled away as the vegetation regrew. Three birds specially adapted to take advantage of burned areas are the Lazuli Bunting, Black-chinned Sparrow, and Lawrence’s Goldfinch. The bunting’s numbers exploded the first year after the fire, the sparrow’s in the second year. The goldfinch’s favored food is seeds of plants of the family Boraginaceae, such as fiddleneck and popcornflower, many of which proliferate in recently burned areas. 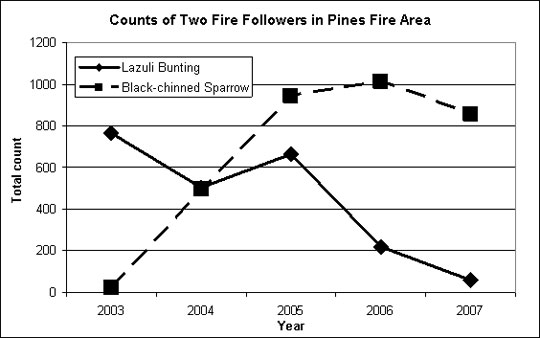 A roughly equal number of species was cut back by the fires. Species affected especially adversely include the Wrentit, Bushtit, Bewick’s Wren, and California Thrasher in chaparral, the Oak Titmouse and Hutton’s Vireo in oak woodland, the Mountain Chickadee, Pygmy Nuthatch, Steller’s Jay, Western Tanager, and Brown Creeper in coniferous forest, and the Ladder-backed Woodpecker, Scott’s Oriole, and Cactus Wren in desert-edge scrub.

As a generalization, small birds (less able to escape the fires?) were affected more seriously than larger birds. The response of birds of prey to the fires was either neutral or positive.

As a generalization, sedentary species were affected more seriously than migratory or dispersive ones. Summer visitors are already gone before the peak of fire season in October. Birds like the Lesser and Lawrence’s Goldfinches and Costa’s Hummingbird that move to take advantage of abundant but short-lived resources are adapted to exploit the flush of wildflowers that follows a fire.

As a generalization, birds that build open cup nests in the canopy (Western Tanager, Black-headed Grosbeak, Hutton’s Vireo) are recovering poorly in comparison to those that nest in tree cavities, in low shrubbery, or on the ground. A leafless canopy offers nests in trees little concealment from predators.

There are exceptions to each of these generalizations. For example, the California and Mountain Quails are sedentary but nest on the ground—they took advantage of the new growth in the burned areas and proliferated. But these generalizations lead me to expect that the California Gnatcatcher and San Diego Cactus Wren—small to medium-sized sedentary birds—will be among the species worse affected by 2007’s fires. The fires of 2007 burned the habitat in San Pasqual Valley and around Lake Hodges that was the site of maximum concentration of both species. 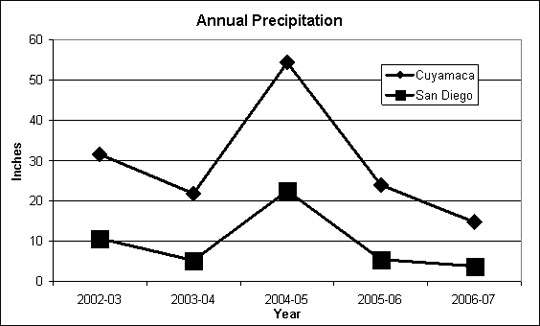 Some summer visitors, especially the Lazuli Bunting, peaked after wet winters and dropped after dry ones. For several seed-eating birds, such as the Savannah, Chipping, Brewer’s, Golden-crowned, and Lark Sparrows and the Lesser Goldfinch, the numbers in winter peaked one year after a wet winter and crashed one year after a dry winter. Interestingly, two insectivorous birds, the House Wren and Yellow-rumped Warbler, followed the same pattern as those seed eaters. It seems that opportunism in being able to take advantage of burned areas and opportunism in being able to take advantage of a wet winter are linked. 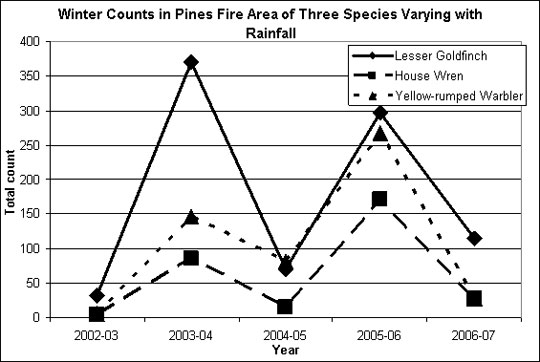 Poor regeneration of conifers in the Cuyamaca Mountains, documented and quantified by Janet Franklin and her students at SDSU, raises concern for the long-term survival of birds specialized for conifers. Among the species most severely affected by the fires are those specialized for coniferous forest such as the Mountain Chickadee, Pygmy Nuthatch, Steller’s Jay, and Western Tanager. Small recently established populations of the Red-breasted Nuthatch and Golden-crowned Kinglet were eliminated from the Cuyamaca Mountains, but those of the Yellow-rumped Warbler, Dusky Flycatcher, and Green-tailed Towhee were not. Our studies have not addressed nocturnal birds, so we cannot assess the fires’ effect on the Spotted and Northern Saw-whet Owls. In San Diego County the Spotted occurs primarily in coniferous forest, the Saw-whet exclusively so. Thus the effects on these species may have been severe as well.

A longer-term threat not addressed by our short-term studies is the effect of habitat change brought about by repeated fires. An increased frequency of fire elsewhere in the county could lead to replacement of chaparral and sage scrub with nonnative grasses, leading then to decrease of shrub-loving animals.

Several birds whose numbers were decimated by the fires then began a recovery saw that recovery stalled or reversed by two consecutive years of drought, 2005–07. These include the Bewick’s Wren, Wrentit, California Thrasher, and Oak Titmouse among resident species and the Ruby-crowned Kinglet, a winter visitor. 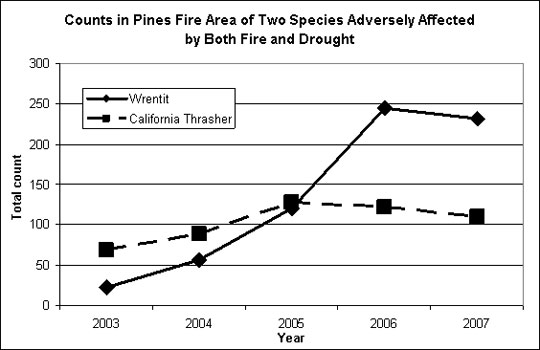 By summer 2007 many of our observers were commenting with alarm on the dying back of many shrubs that had resprouted or began as seedlings following the Pines and Cedar fires. In 2002, a year of extreme drought, Michael Patten and his colleagues were studying the effects of habitat fragmentation on the nesting success of birds around San Diego. They found an almost total failure of nesting that year of all four of their target species, the Wrentit, Rufous-crowned Sparrow, Spotted Towhee, and California Towhee. It’s clear that if droughts as extreme as those of 2001-02 and 2006-07 become regular, many species will not return to their prefire levels. If droughts of this magnitude are coupled with huge wildfires, some common birds, especially the Wrentit, Bewick’s Wren, California Thrasher, and Hutton’s Vireo, will become rare. Some mountain birds, especially the Pygmy Nuthatch, Brown Creeper, and Saw-whet Owl, could see their ranges contract out of San Diego County entirely.

As catastrophic as the fires seem, I believe the more insidious threat to our wildlife is the trend to a dryer climate. If the fires are contained within historic rainfall patterns, their effect is likely to be made up sooner or later (except possibly for species like the Pygmy Nuthatch dependent on conifers). But if the fires are a symptom of a shift toward a dryer climate, they may have marked a quantum shift toward reduced numbers and reduced ranges of many species.