Previous studies of rodents’ responses to fire indicate that species preferring somewhat open habitat, such as Dipodomys spp. (kangaroo rats), Chaetodipus spp. (pocket mice), Microtus californicus (California vole), Reithrodontomys megalotis (harvest mouse), and Peromyscus maniculatus (deer mouse), colonize burned areas soon after a fire. As shrub density and food availability increase with the recovery of the vegetation, shrub-specializing species, such as Neotoma spp. (woodrats), P. californicus (California mouse), P. boylii (brush mouse), and P. eremicus (cactus mouse) recolonize (Cook 1959; Lawrence 1966; Lillywhite 1977; Price and Waser 1984; Schwilk and Keeley 1998). However, the timing of recolonization after a fire is not well understood. For example, Wirtz (1982, 1995) suggested that woodrats typically take at least 20 months to recolonize burned habitat, whereas Schwilk and Keeley (1998) reported them in such habitat as soon as 6 months after a wildfire. Such differences in recolonization rates are probably determined by differences in the extent of shrub cover, fire severity, and distance from unburned perimeters, though the contributions of these variables are little understood. 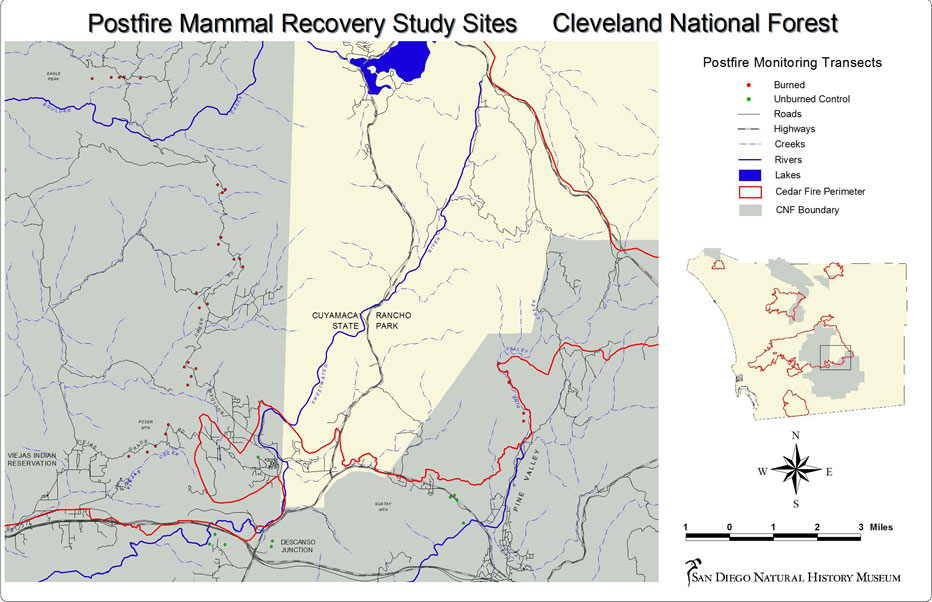 Our surveys began in November 2004, ~13 months after the Cedar Fire. Since then, we have been sampling rodents twice per year (in spring and fall) at 30 burned and 10 unburned plots. Burned plots vary in the severity with which they were burned and range in location from the fire’s perimeter to ~8 km inside the perimeter. The unburned plots lie south of the Cedar Fire’s perimeter in chaparral not burned for at least 10 years. On each survey we set out 30 baited Sherman live traps at each plot. The traps are arranged in two rows, separated by 10 m, of 15 traps each separated by 7 m; they are set for 5 consecutive nights. 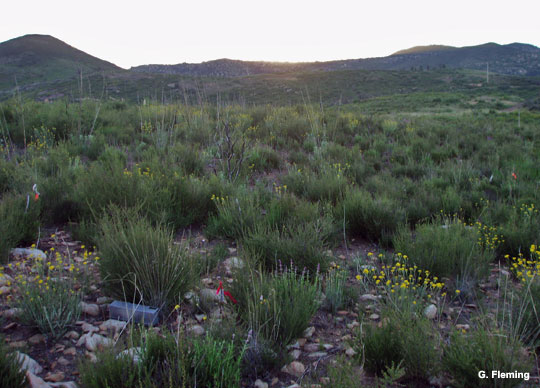