What is that enormous tree on the lawn by the Museum? And why is there a fence around it?

This is one of the notable trees of San Diego. It's a Moreton Bay Fig (Ficus macrophylla, an Australian native), which was probably planted in about 1914 during the preparations for the exposition for which Balboa Park was first developed. While many people would like to attribute its planting to Kate Sessions, San Diego's pioneer horticulturist and street tree planter, there is no documentation to verify this claim.

I saw an interesting plant last weekend; can you tell me what it is?

Aah! Our specialty! Of course we can. Naturally, you did all you could to help us. For example, you... ·

If you want to bring the plant and whatever information you have to the museum, you can leave it at the admissions desk, and fill out a specimen identification form, and we'll call you when we have identified it for you.

I have a problem I hope you can help me with. I'm trying to grow...

Stop right there! While we admit we know a lot about plants and plant systematics, we are far from being experts on gardening or horticulture.

Fortunately, there are some real experts who will be happy to answer your questions. The San Diego County Farm Advisor's office has a well-trained volunteer group called the Master Gardeners, who staff the phones waiting for questions just like yours. Their number is (619) 694-2860. They can advise you on pest control, plant propagation, pruning tips, problems with plant care and cultivation, or just about anything else you can think of. If they can't answer it themselves, they'll find someone who can. Similar programs exist in other places, so if you're not in San Diego, find out who your farm advisor is.

If the plant you are growing is a popular one -- like orchids, bamboo, bromeliads, rare fruits -- maybe there's a local club devoted to it. You can get in touch with specialty gardening club by calling the umbrella organization, the San Diego Floral Association, at (619) 232-5762.

Do we have poison-ivy here? 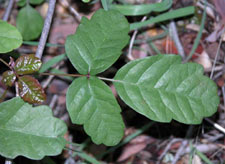 We have a close relative of poison-ivy, called poison-oak (Toxicodendron diversilobum). If you are going to spend time in any wild places in southern California or northern Baja California (except in the deserts), it is very important that you learn to recognize this plant. It is a common component of the natural vegetation in coastal canyons, foothill chaparral, and forest systems throughout the region.

Contact with poison oak can cause allergic dermatitis (rash, itching, blistering) in most people, and very severe allergic reactions in some. All parts of the plant are toxic. The reaction is caused by a substance called urushiol, which is contained in the plant's resin canals and is released when the plant tissues are bruised or injured. This allergen can also be transferred to the surface of clothing or the fur of pets, and can be carried in the smoke of the burning plant. Because this response is an allergy, it can become more extreme with subsequent exposures. With repeated exposures, it can develop in people who were previously unaffected by poison oak.

Poison oak has glossy leaves divided into three leaflets. It's often a rambling shrub, growing up trees (as in this picture) or over rocks, and may sometimes become a robust vine. Its leaves turn vivid red in the autumn and fall off, leaving the bare stems -- still dangerous to touch -- for the winter. It has clusters of small, ribbed, whitish fruits in the late summer and fall. It's not related to oaks at all, by the way; it's probably called that because of its lobed leaflets. It's really in the Cashew family, along with pistachio nuts, California pepper trees, and such native plants as Lemonade Berry and Laurel Sumac.

You mentioned native plants. What do you mean by that?

Native plants are species that occur naturally in a region, not having been brought in -- either accidentally or on purpose -- by humans. There are many non-native (or "exotic" or "introduced") species that have spread into wild areas and grow freely there. These are called "naturalized" plants. In some cases they may be so aggressive that they crowd out native species, and may even threaten them with extinction.

Do cacti have poison on their spines?

No, cacti have spines (modified leaves) that are dead and do not produce any type of toxins on their surfaces. Although some cacti, especially prickly-pears and chollas, do have microscopic spine surfaces with cells pointing outward and backward (retrorse scabrosity), like a fishhook. These spines can cause physical tissue damage when the spine is removed from the skin, causing pain and inflammation of the area. However, some other succulent plants, such as agaves (century plants) may harbor bacteria that settle on their spines which can enter and infect a person who is punctured with a spine.

How do you remove cactus spines from your skin?

Well, there is no real easy way to remove cactus spines although many techniques have been proposed. The best alternative is to try and not get stuck by a cactus, but if you do here are some options. Generally, a comb is useful to remove cactus stem pieces (such as cholla joints/branches) and clusters of spines. Individual spines are best extracted with fine-tipped forceps or precision pliers.

Probably the worst spine encounters between plants and people are with glochids (tiny deciduous spines found in all species of the cactus subfamily Opuntioideae, which includes prickly-pears and chollas). Hundreds of glochids can be found at the base of each spine cluster in these cacti and if touched the glochids dislodge and stick into the skin causing an annoyance like fiberglass particles. Methods such as removal with masking tape, allowing glue to dry over them and peeling it off, scraping a knife in the same direction over the skin continuously, or just leaving them alone and letting them fester out are all viable practices that depend upon individual preference.

Can jumping cacti throw their stems at passersby?

No, but many people swear that "jumping" cacti, like the Teddy-bear cholla (Cylindropuntia bigelovii), Chain-fruit cholla (Cylindropuntia fulgida), and the Clavelina (Cylindropuntia molesta) can throw their spiny stems at them as they walk by. The truth is that many of these cacti are well adapted for vegetative dispersal and the terminal stem pieces will dislodge from the parent plant at the slightest touch and will become painfully attached to any animal or person walking by, subsequently using the animal as a mode of transportation to a new locality. Frequently, hikers unknowingly pick up cactus stems from the ground on the side of their boots, and with the next step the cactus is thrown onto the back of their leg and penetrates the skin, seeming to come from nowhere.

WARNING to the inexperienced desert hiker: be careful while walking through a desert landscape with cactus nearby, or you may be the next target for a cholla's dispersal. Rattlesnakes are not the only pain-causing entities "lurking" on the desert floor.