Winner of the 2004 Western Museums Association Excellence in Exhibition Award

This exhibition completed its tour of the U.S. in 2009.

In December 2003 the San Diego Natural History Museum, in collaboration with the Irvine Museum, premiered its exhibition, Plant Portraits: The California Legacy of A.R. Valentien.

Beautiful products based on images from the Valentien Collection are available in our Museum Store.

The Museum is grateful to Eleanor and Jerome Navarra for generously underwriting the conservation, documentation, and exhibition of the Valentien collection. 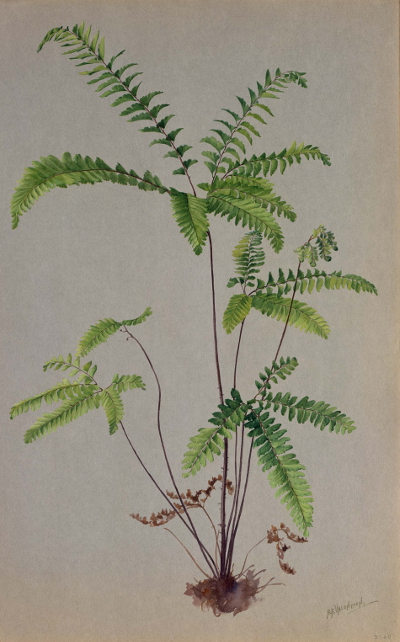 Adiantum aleuticum. This cold-climate Maidenhair fern is abundant on damp forest floors and cliffs in northern California, and ranges north to Alaska and across the Rocky Mountains. In this and other maidenhairs, the spore-bearing tissues are concealed beneath the rolled-under edges of the fan-shaped leaflets. 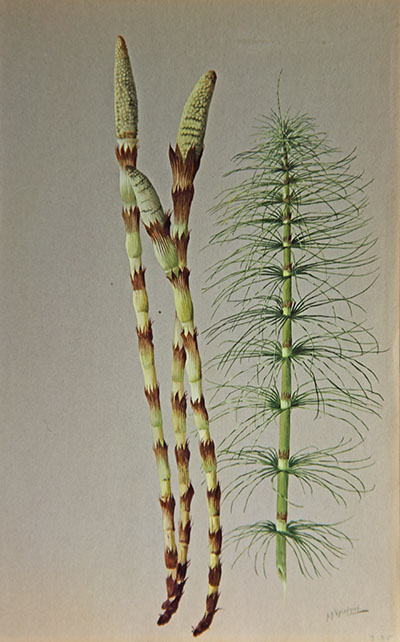 Equisetum telmateia. Horsetails evoke the artists’ renditions of primordial eras – and rightfully so, as the family dates back several hundred million years. Their reproductive system is primitive, producing spores in a conelike structure at the tip of the stem. However, they more frequently multiply asexually through rhizomes. 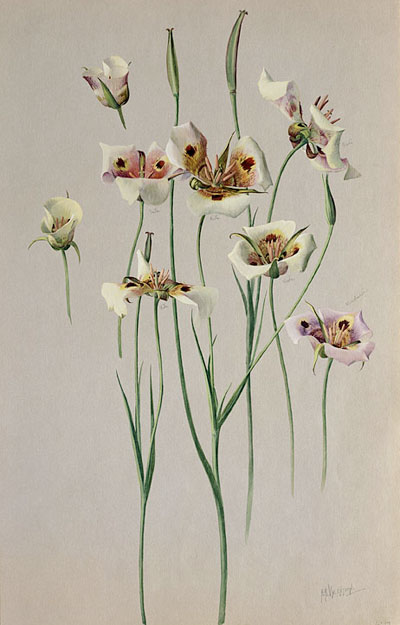 Calochortus venustus. Valentien especially enjoyed painting species of Calochortus, a stunning genus in the Lily family that displays its greatest diversity in California; 65 species show a dazzling panoply of variation. The name Calochortus comes from the Greek for “beautiful grass”; the latter refers to the linear, grass-like leaves. Many species have special conservation status, as either threatened or endangered, with specific, restricted distribution. 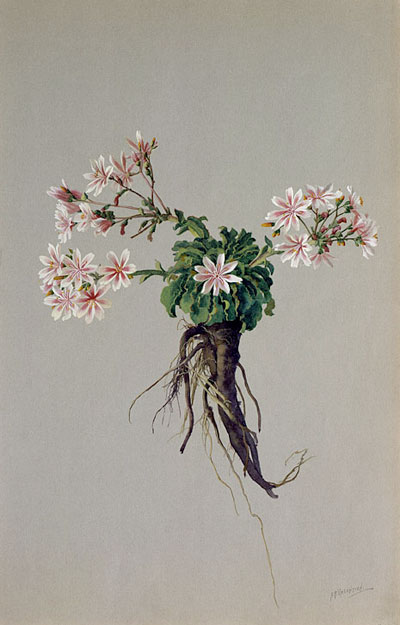 Lewisia howellii.  Named after Captain Meriwether Lewis of the Lewis and Clark Expedition, this species of Lewisia is a fascinating plant found clinging by a very stout taproot to rocky outcrops, wedged into crevices, and in cracks on canyon walls. The flowers with their pink and white candy-striping are charming and showy against the backdrop of a basal rosette of dark green leaves. This beautiful plant is a threatened species in northern California. 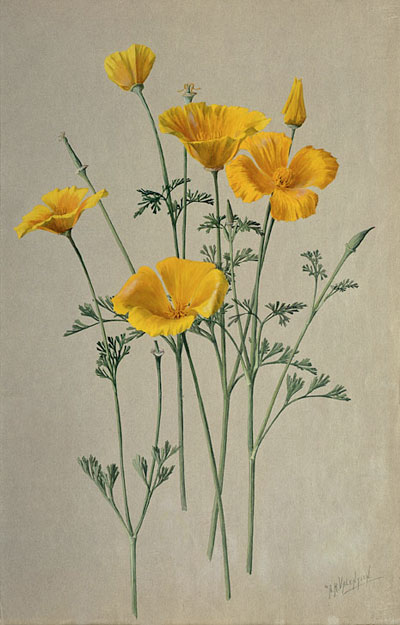 Eschscholzia californica.  Nobody viewing a rolling landscape golden with these brilliant poppies would dispute its choice as California’s state flower. California Poppy occurs in nearly every county of the state, as well as outside the state boundaries. A self-seeding annual, sometimes resprouting from its sturdy taproot, it readily naturalizes where garden conditions are suitable. 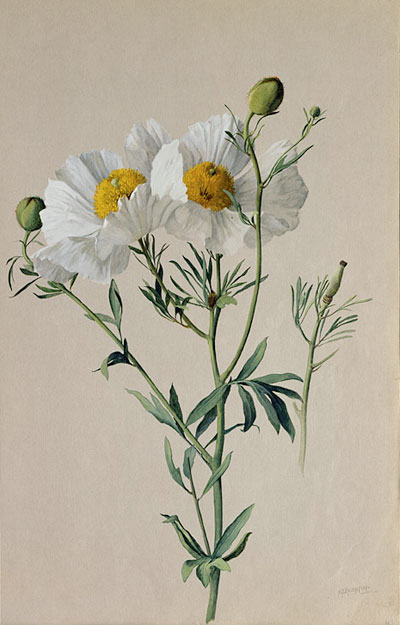 Romneya trichocalyx. Hairs on the sepals and slightly smaller flowers distinguish this poppy from its cousin, R. coulteri. The Matilija Poppy has a somewhat greater native range, blooming from northern Baja California to Ventura County. 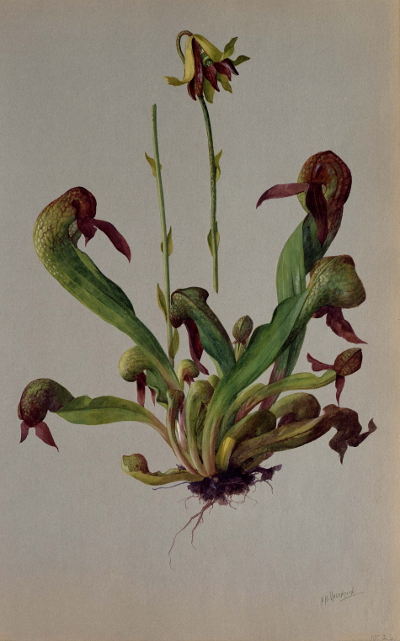 Darlingtonia californica. The carnivorous California Pitcher Plant is endemic to the Klamath region of northwest California and southern Oregon, with a few disjunct populations. It is restricted to nutrient-poor soils in seeps usually called "Darlingtonia bogs." Insects enter the tubular modified leaves, which are nearly closed by a hood with transparent patches. Exhausted in the attempt to escape, they eventually light on the slippery wall of the leaf, where downward-pointing hairs force them to the pool of enzyme-laden water below. 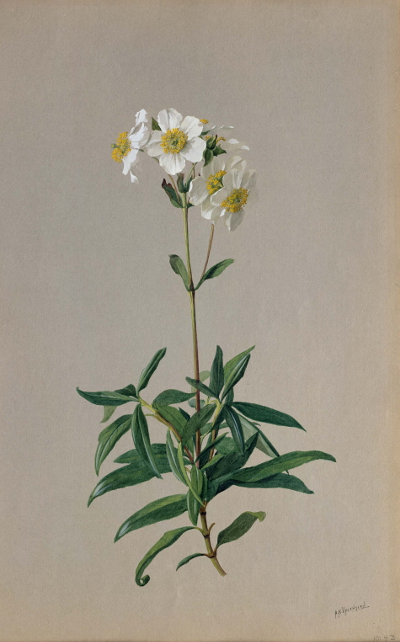 Carpenteria californica. The Tree Anemone, with its showy clusters of large white flowers is a threatened species of California. It is known from only seven occurrences in the foothills of the Sierra Nevada, and these are in areas threatened by development, logging, and grazing. It is in the same family as the better-known Mock Orange, and is also used as a landscaping plant, but unlike its relative, it keeps its dark glossy leaves year-round. 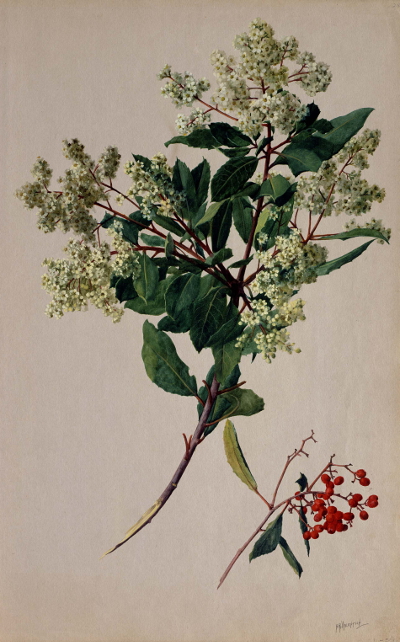 Heteromeles arbutifolia. Toyon, a widespread member of the rose family, is a large shrub or small tree which is a fairly inconspicuous element of coastal scrub and chaparral until late in the season. Abundant clusters of bright red berries persist through the late fall and winter following the late summer flowering of this native shrub, giving it another common name, Christmasberry. The berries provide a source of food for migratory birds and winter residents. 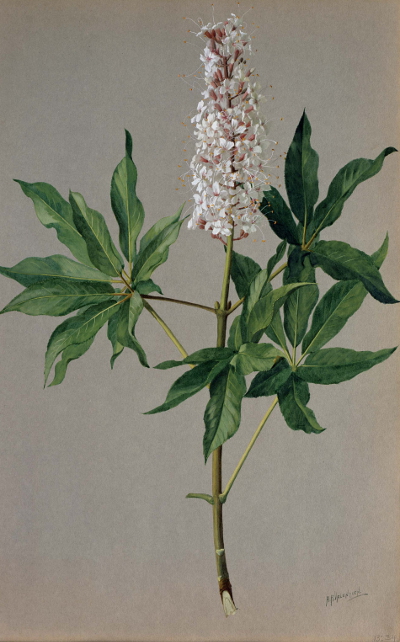 Aesculus californica. The showy floral spikes of the California Buckeye will give way to large green pods, which in turn produce the shiny brown seeds--sometimes called horse chestnuts--that give the plant its name. Though all parts are toxic, the nut meal can be made edible by leaching, and was a food used by indigenous Californians. This winter-deciduous small tree is found in the mountains and foothills of central California. 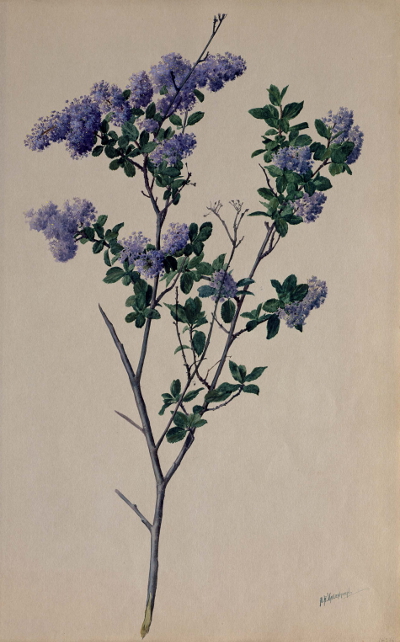 Ceanothus tomentosus. This and other species of Ceanothus are common in chaparral on hillsides and mountains throughout southern California. At the peak of their springtime bloom the flowers can look like a purple mist over the hills. The name "tomentosus" refers to the fuzzy underside of the leaf. 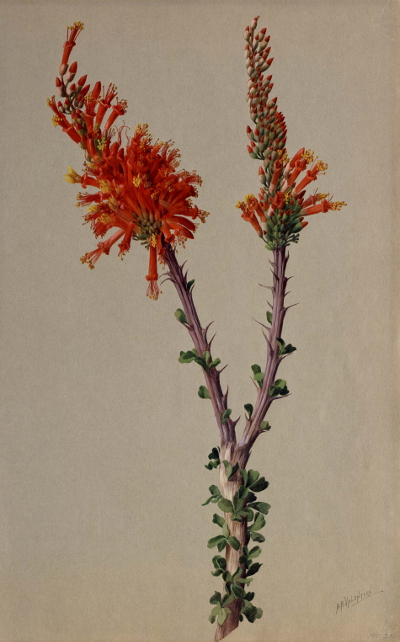 Fouquieria splendens. Hummingbirds and desert visitors alike delight in the flame-like bloom of the Ocotillo, borne high in the air on spiny whiplike stems. The Ocotillo sheds its leaves during the hot dry months, and quickly takes advantage of scarce desert moisture by sprouting fresh leaves and flowers in as few as 72 hours after a rain. 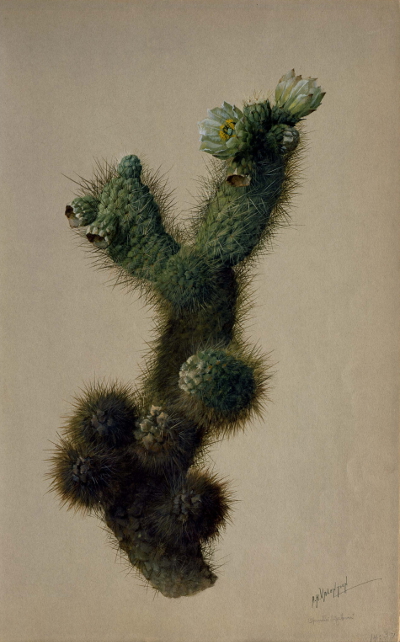 Cylindropuntia bigelovii. The Teddy Bear Cholla is cuddly only in appearance, as it is abundantly armed with spines and hairlike glochids, to the dismay of any who approach too near. Detached stem segments often litter the ground around the plant, another hazard for passersby. This is the primary method of dispersal for this species, as these loose cactus joints may root wherever they are carried. 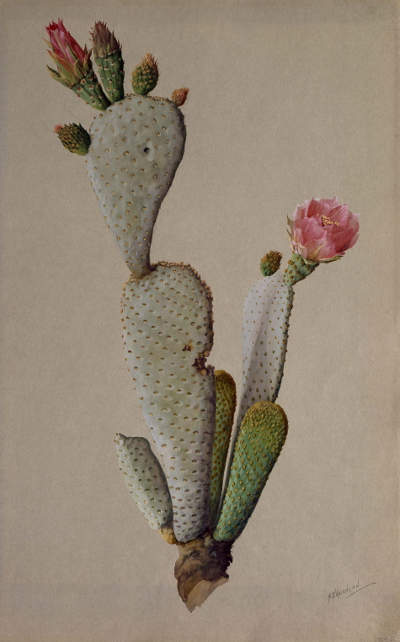 Opuntia basilaris. The vivid colors of the flowers of the Beavertail Cactus are due to a type of pigment known only in a few plant families. Although the lack of spines on this cactus give the plant a benign look, the Beavertail Cactus is well armored: thousands of hairlike spines, called glochids, are borne in circular patches on the pale blue-green pads. 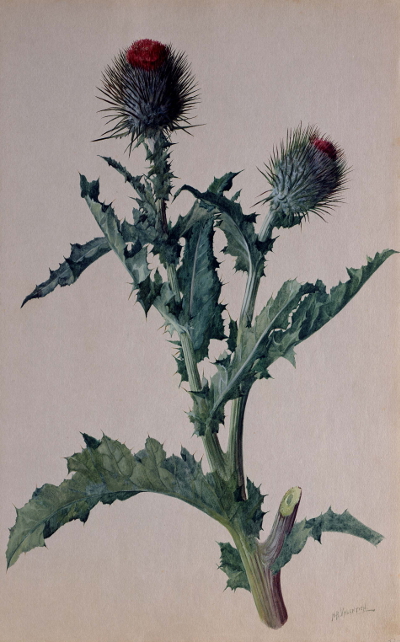 Cirsium occidentale. Valentien has captured the coarse, bold beauty of this prickly, spiny plant, with its tightly-packed head of purplish-red disk florets.  This plant is also known as the Compact Cobwebby Thistle. 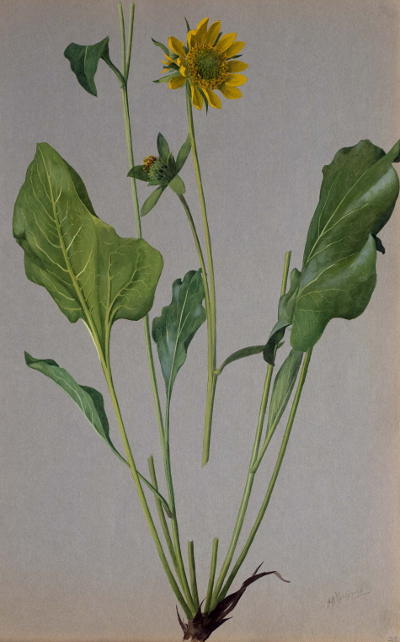 Balsamorhiza deltoidea. Balsam-Root is so-called because of the sticky sap found in the taproot of the plant. Found on sunny slopes with well-drained soils in northwestern California, Oregon, and British Columbia, Balsam-Root’s showy blooms appear in spring and summer. 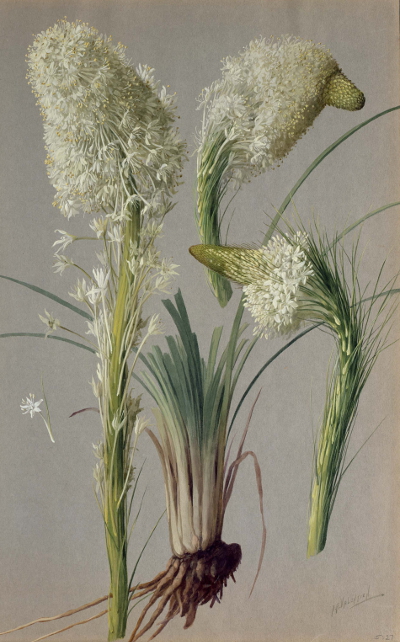 Xerophyllum tenax. This member of the lily family persists for several years without flowering, suddenly giving rise to a showy flowering stalk which dies back after setting fruit. The leaves of Bear-grass were used by indigenous people to make water-tight baskets. 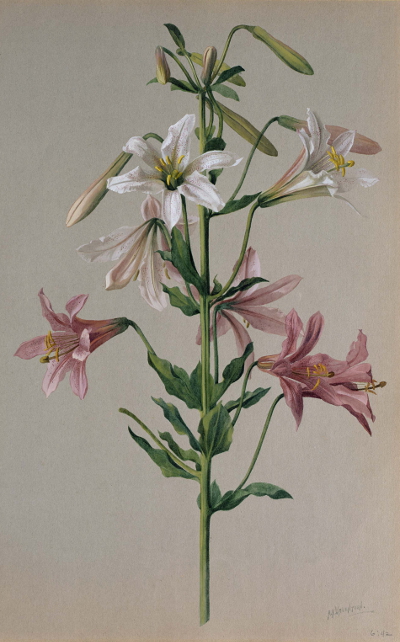 Lilium washingtonianum. The Washington Lily is the largest white lily native to the United States. It blooms during the heat of the summer in the chaparral and coniferous forests of the Sierra Nevada and Cascade ranges.