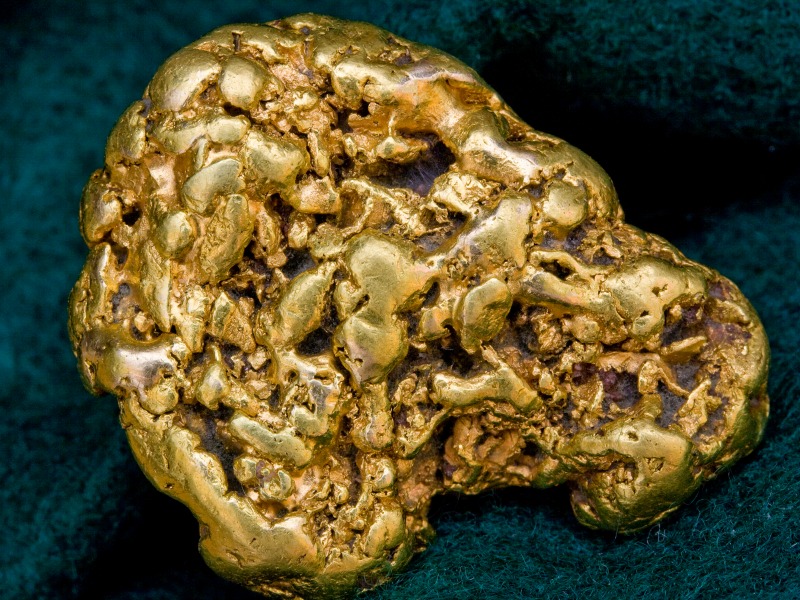 Gold is one of the rarest and most valuable minerals on Earth. It occurs as a native metal, which means it can be found in an uncombined metallic form. It usually forms in small grains or flakes. Nuggets can be found in alluvial or glacial deposits. Gold's yellow color and brightness vary with the amount and type of impurities in it. It's ideal for jewelry because it's both easy to shape and durable to wear. A shiny yellowish mineral called Pyrite is often mistaken for gold. Don't be fooled by this “fool's gold.”

One third of the world's gold is mined in South Africa. Other sources for gold are Australia, Russia, and the United States.

In 1869, gold was discovered at Coleman Creek in the mountains on the eastern edge of San Diego County. Small placers were setup near Wynola, and gold veins were also discovered in the Julian and Banner areas. A gold-mining boom led to the settlement and growth of the mining town of Julian, where artifacts of the gold rush era can be seen at the Julian Pioneer Museum. The Stonewall Jackson Mine, the most productive of the historic gold mines in the county, is within Cuyamaca Rancho State Park.