We are located in Balboa Park ( 1788 El Prado, San Diego, CA 92101 ), near the intersection of Park Boulevard and Village Place, just south of the San Diego Zoo. See Balboa Park Map for available parking, tram and museum locations with the park.

There are numerous small lots throughout the Park, including a parking lot next to the Museum's east side, and two parking lots near the Balboa Park Carousel on Village Place and Park Blvd. We are also directly south of the San Diego Zoo, which has a large public parking lot.

Parking for visitors with disabilities is available on the east and west sides of the building. 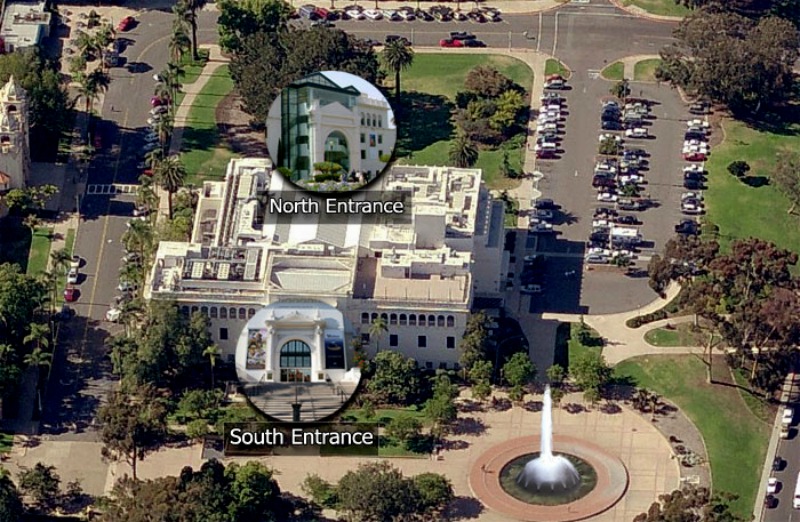 The Museum is on the #7 bus line, which runs very frequently between downtown San Diego (along Broadway for most of the downtown portion of the route) and east San Diego and La Mesa (along University for most of eastern portion).

Take any outbound #7 bus. The bus will travel north on Park Blvd. The nearest stop to the museum is at the pedestrian overpass which crosses over Park Blvd. An earlier stop at the Rose Garden is also close.

Take any inbound (Downtown) #7 bus. The bus will travel west on University Avenue and turn south onto Park Blvd. The nearest stop to the museum is the one immediately after the Zoo, at the pedestrian overpass that crosses over Park Blvd.

Take any trolley into downtown San Diego. Get off at the City College stop (12th Ave. and C St.) Transfer to the outbound #7 bus just around the corner at 11th and C.

Amtrak Pacific Surfliner offers 11 trains daily from Los Angeles to San Diego. When making train reservations, you can also reserve bus transportation from the Santa Fe station to the Museum. Group of 20+ receive a 20% discount and seniors 62+ receive a 15% discount. For reservations call 800.872.7245 (groups call 800.872.1477).