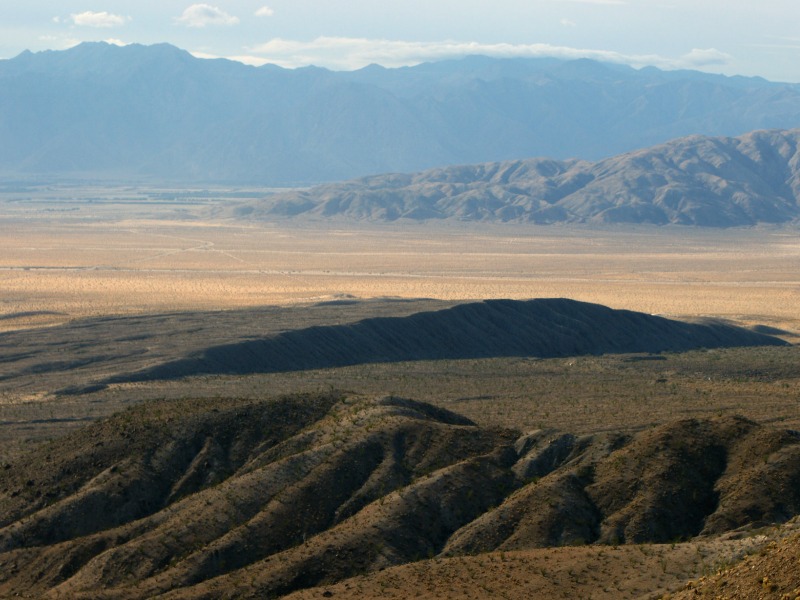 San Diego County is about 900 square miles of very complex geology, from the high desert and mountains to the coast. Earthquake-causing faults are what make our geology so interesting.

What is a fault?

An earthquake fault is a place where Earth’s crust has broken because of movement under the surface. The Earth’s crust rides on enormous tectonic plates that make up the seven major continents. Think of Earth as a gigantic egg with a cracked shell. The cracked shell is like the tectonic plates, and they are constantly on the move, pushing each other. Some ride over top of other plates, and some dive below. This movement causes what we feel as earthquakes, and the land under our feet shifts on its own schedule. The deserts of Southern California are a great place to see the effects of earthquakes first hand. In fact, there are several fault zones you can walk right up to.

The San Andreas fault is the most infamous and dangerous fault in California. This giant shear zone slices 658 miles of California from Cape Mendocino to the Salton Sea. It is the boundary where the Pacific Plate grinds against the North American Plate, and is responsible for the largest and most destructive temblors in California. Closer to San Diego, the Elsinore and San Jacinto faults slash our region from end to end, lifting up mountains and dropping down valleys.

What can earthquakes teach us?

With current technology, we can’t drill more than a few kilometers down, but earthquakes provide the key, inferring what we know about the Earth’s interior. Earthquake waves literally travel around and through the Earth because rock is an excellent medium to conduct wave motion. Scientists who study earthquakes (seismologists) estimate that over one million quakes occur each year—that’s about one every second. During most earthquakes, the shaking is so slight it is barely noticeable to people, but networks of instruments measuring quakes (seismometers) blanket the earth, and the information recorded allows scientists to learn more about Earth all the time. But faults can teach even non-scientists about what is under our feet. Faults have exposed layers of rock, and continue to do so over time. One of the best places in Southern California to see faults is in the Anza Borrego Desert State Park. Here, you can see for yourself where the land has been pushed up, cracked and shifted over time.