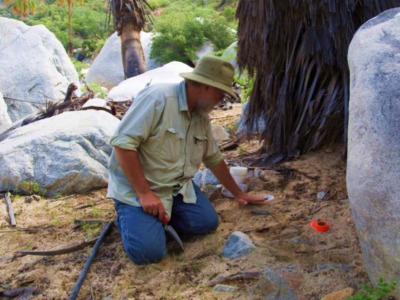 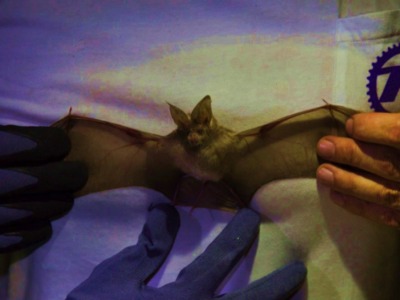 In late October 2013, more than 30 researchers, students, and volunteers converged on the small Sierra de las Cacachilas mountain range near La Paz in Baja California Sur for this binational, multidisciplinary expedition. Together with colleagues from Mexico, the expedition team set out to better understand the shared natural history of this region. Researchers with specialties in plants, insects, spiders, birds, mammals, lizards, snakes, geology, and fish were all represented on this expedition. The research base camp was hosted by Rancho Cacachilas, but researchers traversed the entire area by 4WD, foot, and mule.

While in close proximity to La Paz, the mountains are rugged, and access to the interior high elevation could only be accomplished by foot or mule. Historical collections from the heart of the mountains were very rare, making it a “black hole” of biodiversity information. This is why the Sierra de las Cacachilas were identified by Museum scientists as a prime location for an expedition.

Many scientists on this expedition found examples of species previously known to exist other areas, but were discovered for the first time in the Sierra de las Cacachilas. Early estimates suggested they found at least 12 species previously only known from the Sierra de La Laguna. The Sierra de La Laguna is the highest elevation range in the Cape region and is located more than 40 miles south of the Sierra de las Cacachilas. Many species from this region are known to exist only in that area. In addition to rare regional endemic plants, researchers found many insects and a few vertebrate species that repeated this pattern.

Of course, no expedition is complete without the discovery of new species, and preliminary results indicated the prognosis was good. In addition to a few plant species that were possibly undescribed, the entomologists on the trip were confident they have found some species that were new to science. Identifying new species creates a legacy of information for future research around the globe. Using standardized, repeatable survey techniques allows scientists to make more accurate comparisons between areas and effectively monitor population changes over time.

Perhaps one of the greatest achievements of the expedition was developing a stronger collaborative relationship with partners in Mexico. Working together further enhances our ability to better understand the natural history of our shared region.

This work was generously supported by the Candeo Fund at the International Community Foundation, at the recommendation of Christy Walton.

Below is a video produced by the San Diego Natural History Museum highlighting the Sierra de las Cacachilas Expedition.