In the area burned by the Pines fire we established 32 survey routes plus 4 additional “control” routes in unburned habitat nearby outside the fire’s perimeter (see table and map). They study’s original design included more control routes, but some of these were burned in the Cedar fire in 2003. For comparison with conditions before the fire, the routes were coordinated with the grid for the San Diego County bird atlas, which surveyed the county on the basis of this framework from March 1997 to February 2002. Each route is contained within one grid square, although one square may contain more than one route. The routes’ elevations range from 2350 feet in San Felipe Valley to 5600 feet on the east flank of Hot Springs Mountain, 5353 feet on Volcan Mountain, and 5500 feet in the Laguna Mountains. Each route is between 1 and 2.5 miles long and was walked in a single morning as an unlimited-distance transect, with all birds seen and heard along the route recorded. Each route was designated by its atlas square, with an additional letter if more than one route was within the square. Each transect was covered by an experienced observer or team of observers on the following schedule through the spring and early summer: one survey between 15 April and 8 May, one survey between 9 May and 31 May, one survey between 1 June and 21 June, and one survey between 22 June and 15 July. Also, each transect was covered through the winter once in December, once in January, and once in February. Each survey of a given route was separated by at least one week. The routes were walked in the same direction each time and were generally covered by the same observer or team on every run. If the regular observer was not able to cover a route on the prescribed schedule, we arranged for a substitute. The study of the Pines fire area continued on this basis from December 2002 through July 2007, for five winters and five breeding seasons following the fire. In Cuyamaca Rancho State Park we established five survey routes in areas that were largely or entirely forested before the Cedar fire (see table and map). Their elevations range from 3930 feet at the Green Valley Falls campground to 6512 feet on the summit of Cuyamaca Peak. Because the Cuyamaca Mountains burned so extensively, there is no area in those mountains where an unburned route of similar length could be established. Therefore, we established a control route in Palomar Mountain State Park about 31 miles to the northwest. Its elevation ranges from 4460 to 5340 feet. The habitat along the Palomar route is also mixed conifer/oak forest but differs significantly, especially in the prevalence on north-facing slopes of the big-cone Douglas fir (Pseudotsuga menziesii), a tree absent from the Cuyamaca Mountains. Surveys of these routes began in April 2004 (thus excluding the winter immediately after the fire) and continued on the same schedule as the Pines fire routes.

In the Cleveland National Forest within the area burned in the Cedar fire we established four survey routes, three in burned areas (along or near Boulder Creek Road and Viejas Grade), one in an unburned area (along Bear Valley Road south of Pine Valley) (see table and map). The burned routes’ elevations range from 2700 feet along the trail to Eagle Peak off Boulder Creek Road to 3934 feet along Boulder Creek Road. The unburned route’s elevation ranges from 3880 at the north end of Bear Valley Road to 4390 feet at the top of the ridge east of Long Valley Peak. All four routes are similar in covering largely chaparral with a 15–25% exposure to groves of the coast live oak (Quercus agrifolia) or Engelmann oak (Q. engelmanni). Beginning in April 2005 Unitt surveyed all four of these routes on the same schedule as the Pines fire routes. 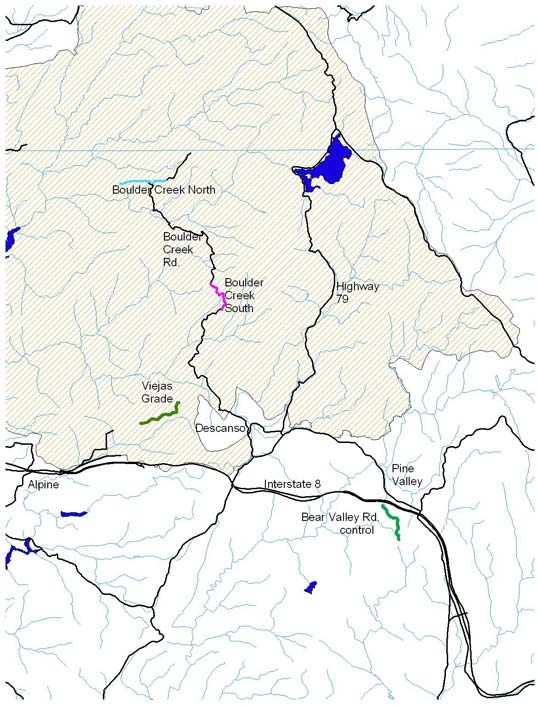 We summed the counts of each species by condition of the route (burned or unburned), season, and year. Then we analyzed the results for each species by a three-step procedure, using chi-squared tests. For each species, we looked for a preference for burned or unburned habitat by pooling the results for all years, then (for the Pines fire) dividing the total for the burned routes by 8 (burned routes totaled 84.4 km, control routes 11.26 km), then testing for a significant difference by means of a chi-squared test.

Second, with another chi-squared test, we searched for trends, testing for a significant departure from a uniform distribution over the 5 years, each season and each condition (burned or unburned) considered separately. Because numbers of some species followed a pronounced see-saw pattern, we believe this method was more appropriate than a regression analysis that assumes a unidirectional trend. We categorized each species by its pattern of change, assigning it to the simplest pattern identified as significant by the chi-squared tests.

Third, also with a chi-squared test, we compared the change along the burned routes to the change along the control routes to see if these patterns differed significantly. In the Pines fire area, where the routes were coordinated with the atlas squares, we compared the number of squares in which the species was recorded before the fire with the number in which it was recorded each year after the fire. Because at 17 the number of squares surveyed is rather low, any difference had to be large to be considered significant under a chi-squared test. This comparison is coarse, but significant differences thus represented major changes before and after the fire.