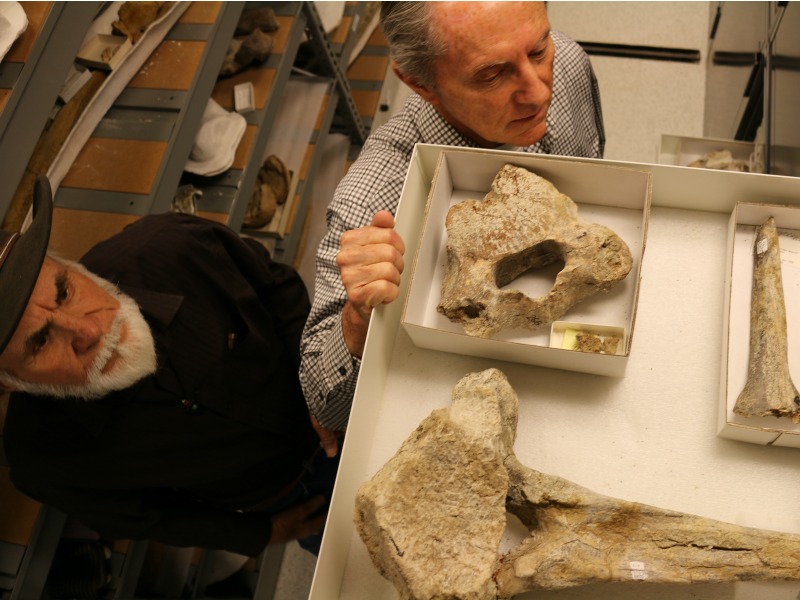 In November 1992, the California Department of Transportation (Caltrans) was doing highway construction on State Route (SR) 54, where San Diego borders National City. Paleontologists from the San Diego Natural History Museum’s PaleoServices Department were conducting routine monitoring of grading activities to identify any fossil material that might be exposed when field paleontologist Richard Cerutti spotted what appeared to be bones and tusk of a fossil mammoth. Immediately, construction in the immediate vicinity of the discovery was halted.

As Cerutti explored the site with PaleoServices Director Dr. Tom Deméré and their team, they found fragments of distinctive molars revealing that what they were actually looking at was a fossil mastodon, a relative of mammoths that lived in this region and went extinct around 13,000 years ago. But something was puzzling. Many of the bones were strangely fractured—or missing entirely. And there were several large stones found in the same sediment layer as the bones and teeth that appeared out of place. It looked like an archaeological site—like the preserved evidence of human activity.

But it couldn’t be an archaeological site.

At that time, the oldest evidence of hominins (humans and related species) living in North America came from sites that were approximately 14,000 years old. But as the paleontologists would determine over weeks of excavating the site, the mastodon bones and teeth lay embedded in fine-grained sediments that had been deposited much earlier, during a period long before humans were thought to have arrived on the continent.

It didn’t make any sense. 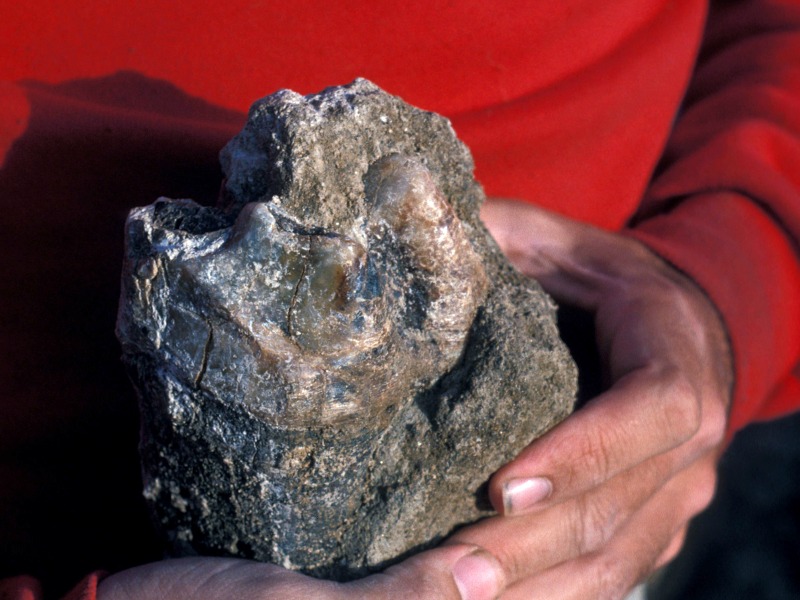 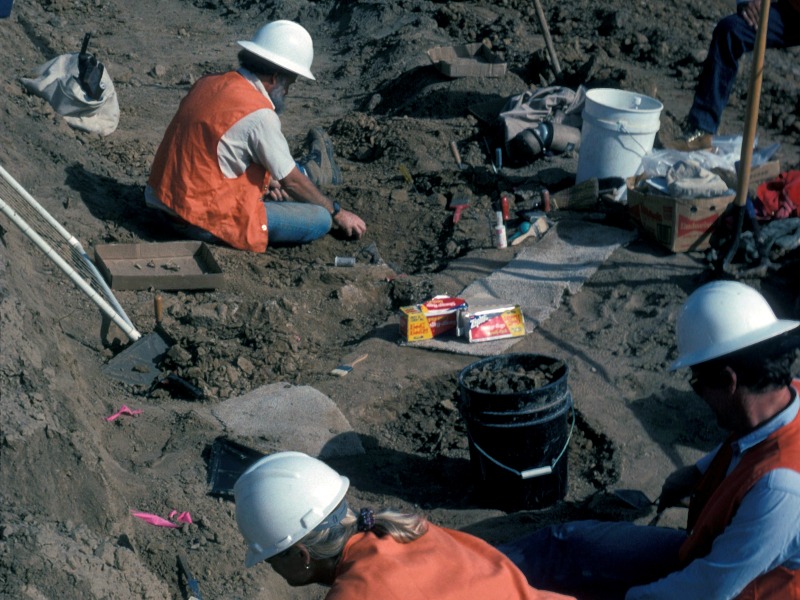 All the available evidence implicated the mastodon find, now named the Cerutti Mastodon (CM) site after its discoverer, as an archaeological site. Dr. Steve Holen, director of research at the Center for American Paleolithic Research, had studied sites in Nebraska and Kansas where fossil mammoth bones showed the same fracture patterns as the mastodon bones at the Cerutti Mastodon site. At these sites, other explanations for the breakage—geological forces, gnawing by carnivores—had been ruled out. Two experiments using the femur bones of recently deceased elephants in Tanzania and Colorado were conducted by Holen and research partner Kathleen Holen. They were able to demonstrate that a forceful blow from a stone hammer on a fresh elephant limb bone lying on an anvil produces the same patterns of breakage found on the mammoth bones in Nebraska and Kansas. No known natural biological or geological process has been shown to produce the same results. When the Holens traveled to San Diego to look at the materials from the Cerutti Mastodon site, they confirmed the same patterns of breakage on those mastodon bones. But the Cerutti Mastodon site had something the Nebraska and Kansas sites didn’t: stones that could have been used to produce the breakage. Dr. Dan Fisher, a paleontologist from the University of Michigan and expert on mastodon fossils, was then brought on board. Fisher had also excavated mastodon and mammoth sites with bones broken while they were still fresh, and he agreed with the Holens that the CM bones and teeth exhibited clear signs of having been broken by percussion. The Holens, Fisher, and Deméré looked at the way the stones and bone material were distributed around the site and were able to determine that the fractured bones and broken rocks, as well as fragments of mastodon tooth, were concentrated in two separate clusters, each around a stone of an appropriate size to have been used as an anvil. Other stones lay nearby. Could these have been used as hammers?

To help answer this question, Dr. Richard Fullagar, an archaeologist from the University of Wollongong in New South Wales, Australia, brought his expertise in use-wear features on stone tools to the scientific team in 2015. Richard compared the impact and wear marks on the stones found at the Cerutti Mastodon site with those seen on known stone tools. Sure enough, the stones that the Holens had interpreted as anvils and hammers showed the same abrasions, fractures, and scars that can only come from repetitive impact. Even though direct inspection of the broken bones and rock fragments had convinced project members of what they were dealing with, they realized it would be difficult to convey subtleties of fragment shape to readers who had not seen the specimens for themselves. They therefore enlisted one of Fisher’s colleagues, Dr. Adam Rountrey, to produce 3D digital models that could be used to create high-resolution 3-D models that would better represent critical aspects of their external form.

A clear picture was starting to emerge of two distinct work areas where hominins were using rocks to break bones and teeth. But couldn’t the arrangement of bones and stones have been geological and accidental—the result, perhaps, of a flash flood that left them in a jumble? Steve Holen, Dr. Jared Beeton, a geomorphologist, and George Jefferson, a paleontologist, had studied sites where flood events left bone material redistributed, and all agreed the evidence did not support this hypothesis. At those sites, flood waters sorted the bones by density and size. This wasn’t the case at the Cerutti Mastodon site, where everything from small molar fragments to large rocks were distributed, unsorted, around the site.

All of the researchers were now convinced—the Cerutti Mastodon site was, unquestionably, an archaeological site. But one critical question remained unanswered: How old was the site? Just how long ago did these tool-using hominins, whoever they were, gather around this mastodon carcass to hammer its bones and teeth into smaller pieces?

There was only one way to reliably answer this question: radiometric dating of the mastodon’s bones. Radiometric dating is a process of determining the age of a material using the rate of decay of its radioactive elements. At the time of the 1992 discovery, several methods of radiometric dating existed, but none that gave scientists a high level of confidence in the age range suspected for the Cerutti Mastodon site.

In 2014, more than two decades after the mastodon’s discovery, the tide turned. Advances in analytical capabilities and the understanding of processes that incorporate natural uranium and its decay products in fossil bone provided archaeologists with a radiometric dating tool that, at least in some cases, could confidently and accurately date these older materials. Deméré sent several of the mastodon bones to the U.S. Geological Survey in Colorado, where geologist Dr. Jim Paces used this dating method to analyze the age of the bones. It took a few months to get the results.

Give or take about 9,000 years, the mastodon bones—which were still fresh when someone fractured them using hammerstones and anvils—were buried 130,000 years ago. 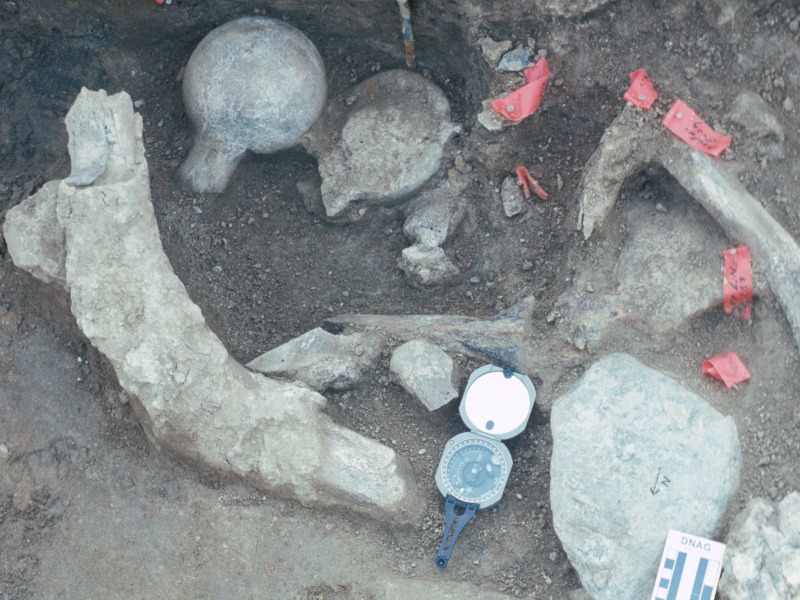 What does this mean? It means that some hominin species was living in North America 130,000 years ago, 115,000 years earlier than previously thought. This makes the Cerutti Mastodon site the oldest in situ, well-documented archaeological site in the Americas. Its discovery rewrites our understanding of when and how hominins populated this hemisphere.

Who were the hominins at work at this site? We don’t know. No hominin fossil remains were found. Our own species, Homo sapiens, has been around for about 200,000 years and arrived in China sometime before 100,000 years ago. Modern humans shared the planet with other hominin species that are now extinct (such as Homo neanderthalensis, otherwise known as the Neanderthals) until about 40,000 years ago. If a human-like species was living in North America 130,000 years ago, it could be that modern humans didn’t get here first.

How did these early hominins get here? We don’t know. Hominins could have crossed the Bering Land Bridge linking modern-day Siberia with Alaska prior to 130,000 years ago before it was submerged by rising sea levels. For some time prior to 130,000 years ago, the Earth was in a glacial period during which water was locked up on land in great ice sheets. As a consequence, sea levels dropped dramatically, exposing land that lies underwater today.

If hominins had not already crossed the land bridge prior to 130,000 years, they may have used some form of watercraft to cross the newly formed Bering Strait as glacial ice receded and sea levels rose. We now know that hominins had invented some type of watercraft before 100,000 years ago in Southeast Asia and the Mediterranean Sea area. Hominins using watercraft could have followed the coast of Asia north and crossed the short distance to Alaska and then followed the west coast of North America south to present-day California. Although we are not certain if the earliest hominins arrived in North America on foot or by watercraft, recognition of the antiquity of the Cerutti Mastodon site will stimulate research in much older deposits that may someday reveal clues to help solve this mystery.