History of the Paintings 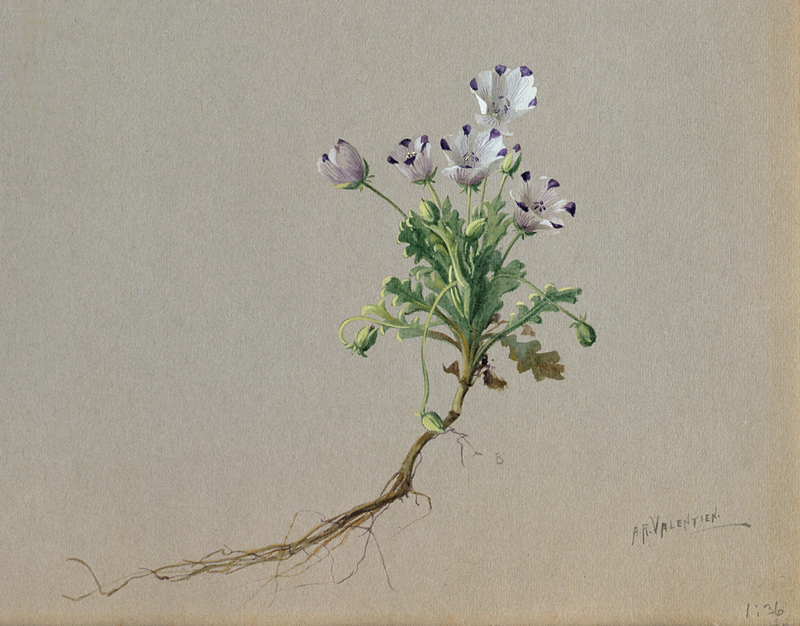 Albert Valentien and his wife Anna, an artist and sculptor in her own right, first came to California from Ohio in 1903. They stayed in Dulzura with Anna's brother, Charles, and for nine months, Albert painted wildflowers of the surrounding area. The resulting 135 paintings were exhibited at the State Normal School in San Diego, where it is believed Miss Ellen Browning Scripps saw them. These paintings were purchased by an anonymous patron who donated them to the Cincinnati Art Museum, which still owns approximately 100 of them. Mr. Valentien finally quit his job at Rookwood Pottery in 1905, exhibited his flower paintings in various cities including New York and Washington, DC and moved to San Diego for good in 1908.

Having seen the quality of Valentien's work, Miss Scripps commissioned him to paint all the wildflowers of California, beginning in 1908. For the next 10 years, Valentien, assisted by his wife and other collectors, traveled around the state, collecting plants and painting them. After completing the wildflowers, he expanded his project to include grasses, ferns, and trees as well. In addition to botanical accuracy and detail, his paintings display a wonderful freshness and spontaneity, in part probably due to his training as a pottery decorator.

He painted his plant portraits in a 14 x 20 inch format on light gray paper, so that white flowers would show up well. Each specimen painted was later pressed and sent to Prof. H. M. Hall at University of California, Berkeley, for identification. He mounted each painting on dressed linen, and labeled them himself. There are 1094 individual sheets, many of them depicting more than one species. These were bound into 22 portfolios. He completed his work in 1918, and was very disappointed to find they would not be published. Albert Valentien died in San Diego of a heart attack in 1925. In March of 1933 the entire collection was donated to the San Diego Natural History Museum by Robert P. Scripps, executor of Miss Scripps' estate.