San Diego's Rattlesnakes, and What to Do When They’re on Your Property 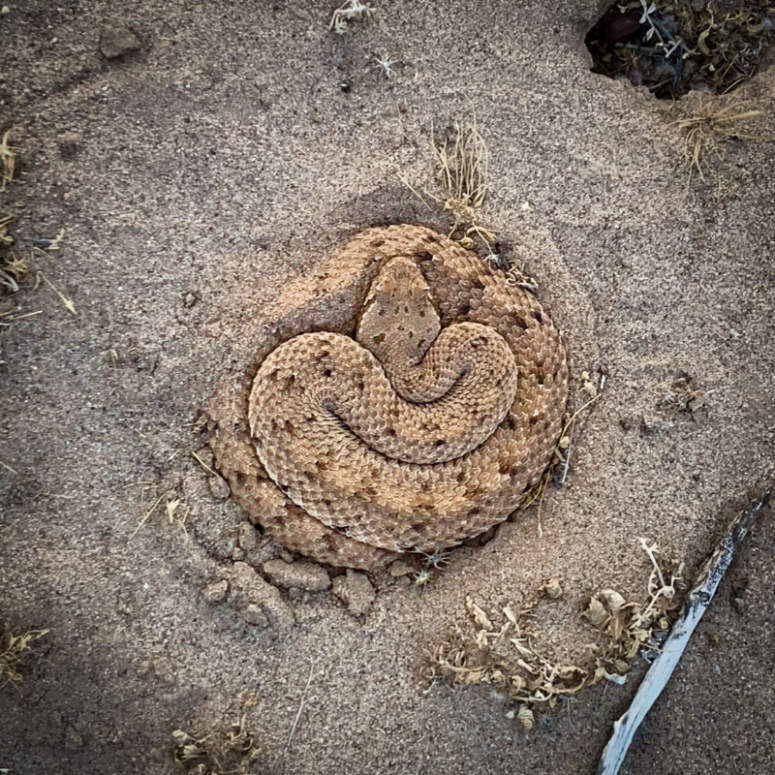 In the wilderness, crossing paths with a rattlesnake can be a very memorable experience. Few sounds stick in the memory quite like the buzz of a rattler.

Encountering rattlesnakes on trails has its minor complications, but finding one in your home, garage, or yard is an entirely different issue.

All too often, people resort to killing rattlesnakes to get rid of them. Not only does this lead to rodent problems and biodiversity loss, but attempting to kill a rattlesnake puts you at the highest risk of getting bitten. Studies show that the largest group of people who are bitten by rattlesnakes are those who try to engage with or handle them.

As mesopredators (predators that, in turn, have their own predators), rattlesnakes are an important part of San Diego's local food webs. Not only do rattlesnakes feed raptors, king snakes, and coyotes, but they also provide us with free, environmentally friendly pest control. That is, if we let them do their thing. Rattlesnakes mostly prey on rodents, which transmit all sorts of diseases like hantavirus and the plague. Without rattlers, we'd have a lot more than just a rodent problem on our hands.

Thankfully, rattlesnakes do not like being discovered by people. They are sensitive, fearful creatures that only hang around our properties for a good reason. Yes, they can be deadly, but they don’t have to be dangerous. With a little knowledge and preparation, coexisting with these magnificent reptiles is possible. Just ask our Herpetology Curator, Brad Hollingsworth—he’s been studying rattlesnakes for 30 years, and cares for the rattlesnake specimens in our collection. All 9,625 of them!

Let’s dive into it—snake season is upon us. 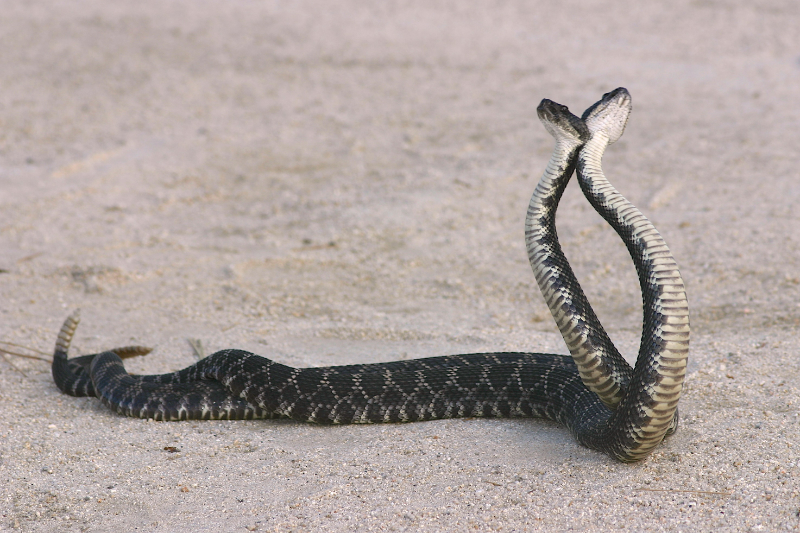 What do rattlesnakes want?

It seems like they’re creeping around, looking for someone to spook. But when springtime rolls around, rattlesnakes are really just looking for dinner and a date.

On the menu? All manner of small mammals, from rabbits and squirrels to gophers, mice, and rats. Rattlesnakes also eat birds, lizards, and other snakes. Warmer temperatures in spring mean they are willing to venture farther from their cozy dens in search of prey.

In San Diego County, rattlesnake mating season begins in late February, peaks in April, and continues through May. During this time, adult snakes are more mobile, especially males that are searching for potential partners. When competing for access to females, male rattlesnakes engage in a mating dance where each snake tries to be taller than the other. Sometimes they will smack their necks together and hiss, though this is to demostrate strength rather than to injure the competitor.

When temperatures really rise in summer, rattlesnakes—like most of us—seek out shade to keep cool. Snakes are cold-blooded reptiles, so they can’t regulate their body temperature like we can. When temperatures rise, they must find shelter from the sun or they could die.

If we can make our properties unwelcoming to hunting, mating, and cooling off, we can discourage rattlesnakes from hanging around. 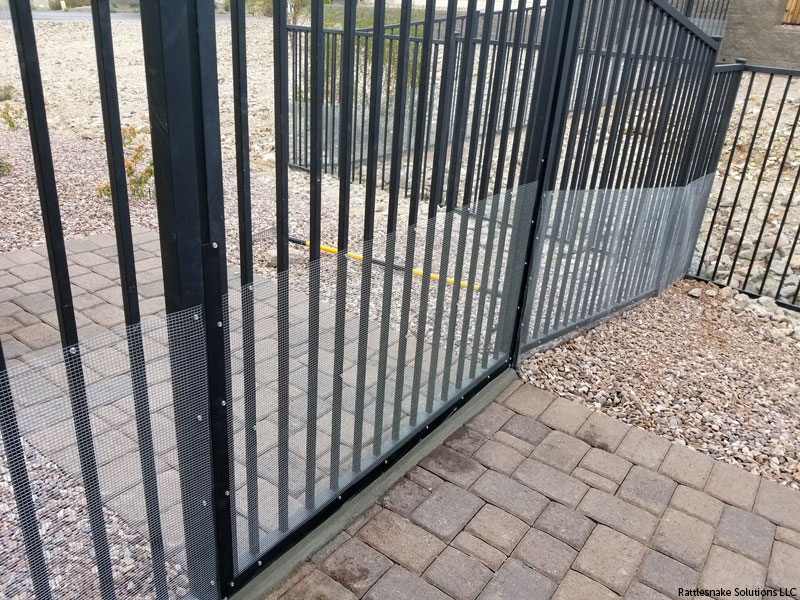 How can I keep rattlesnakes off my property?

There are several actions you can take to make your property unappealing to rattlesnakes. 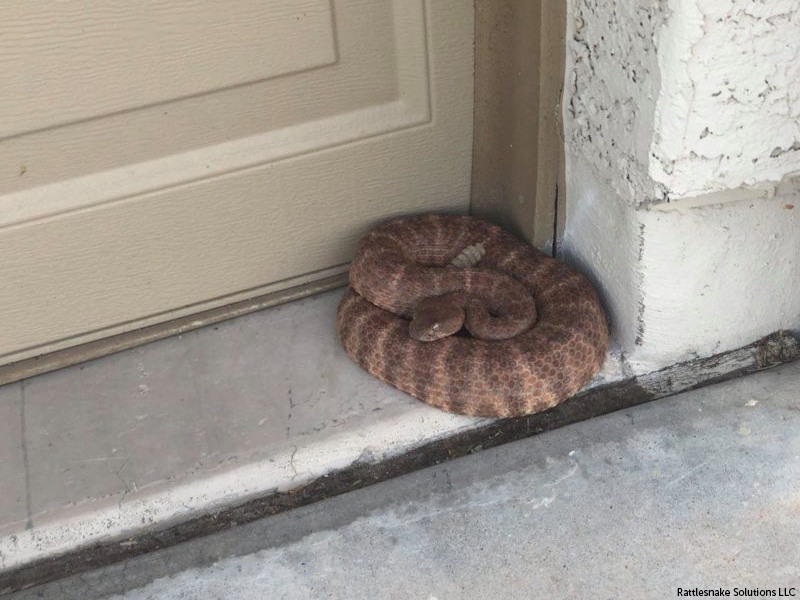 What should I do if there’s a rattlesnake on my property?

Celebrate your free pest control! If the snake isn’t posing a threat to your family or pets, it’s best to let it be. Rattlesnakes are not extremely territorial, so it’s likely the one on your property will move on. But if push comes to shove (or slither), and you need a rattlesnake removed from your property now, there are several resources you can call on to remove the snake.

Unless you are a professional trained in handling venomous snakes, you should not handle a rattlesnake on your own. Remember, attempting to scare, move, or kill a rattlesnake puts you at the highest risk of being bitten.

If the rattlesnake presents an immediate threat to you, your family, or your pets, you must decide whether it is necessary to assume the risks associated with removing it yourself. Remember, rattlesnakes are fearful animals that only strike at humans in defense. They do not “attack” people.

Every rattlesnake bite should be treated as an emergency. Call 9-1-1 (or an emergency vet clinic) immediately if a person or pet is bitten.

There are also a number of private companies throughout San Diego County that will remove rattlesnakes for a fee. If you call on one of these businesses, make sure they are licensed, insured (so they can’t sue for injury if they are bitten on your property), and permitted to relocate snakes, if relocation is part of their service.

Read more from KPBS about the issues associated with relocating rattlesnakes in San Diego County.

How can I tell if it’s a rattlesnake?

Rattlesnakes vary widely in their size, coloration, and behavior. There are a few distinguishing features among rattlesnakes, but frankly, closely examining a rattlesnake isn’t recommended. Knowledge is power though, so here are some tips for reference: 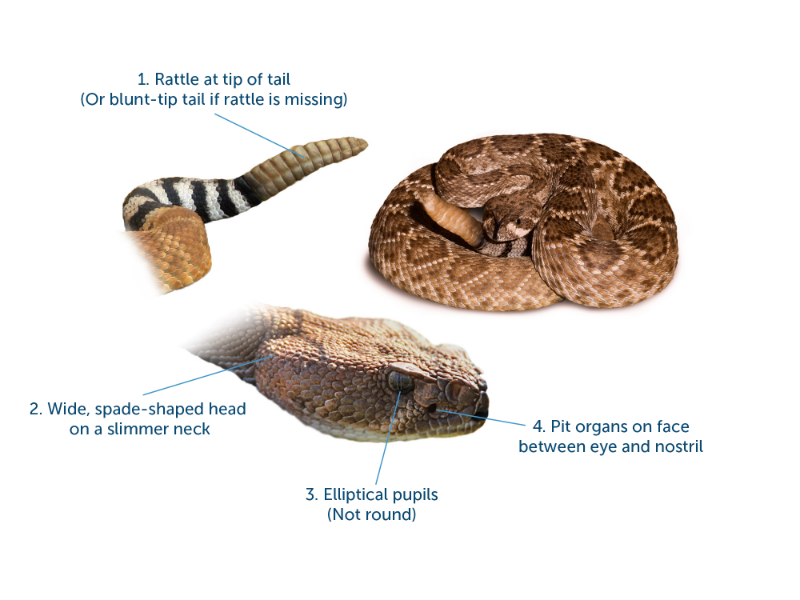 If you want to get a face-to-face look without the risk, come check out the live local rattlesnakes on display in our Living Lab Exhibition.

Our local cast of characters

Get to know the four rattlesnakes of San Diego County—and the one snake that’s just pretending. 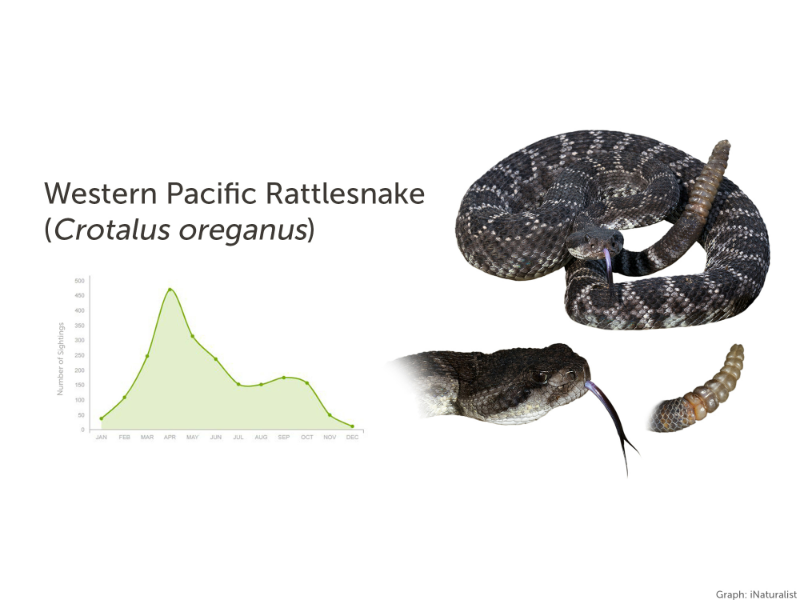 If you see a rattlesnake in San Diego, it is most likely a western. This common species is found west of the Rocky Mountains, ranging from southern Canada to Northern Baja California. Western rattlesnakes are a typical mixture of brown and black hues. There is a lot of color variation in this species, with some snakes sporting distinct brown blotches along their back, and others nearly solid in color.  The eyes of a western rattlesnake will often match the color of the soil over which it slides. Their irises come in shades of gray, pink, tan, bronze, and gold. Western rattlesnakes are a hefty bunch—males can grow more than five feet long! The largest specimen on record was collected by The Nat’s first curator of herpetology, Laurence Klauber. It was five feet, four inches. 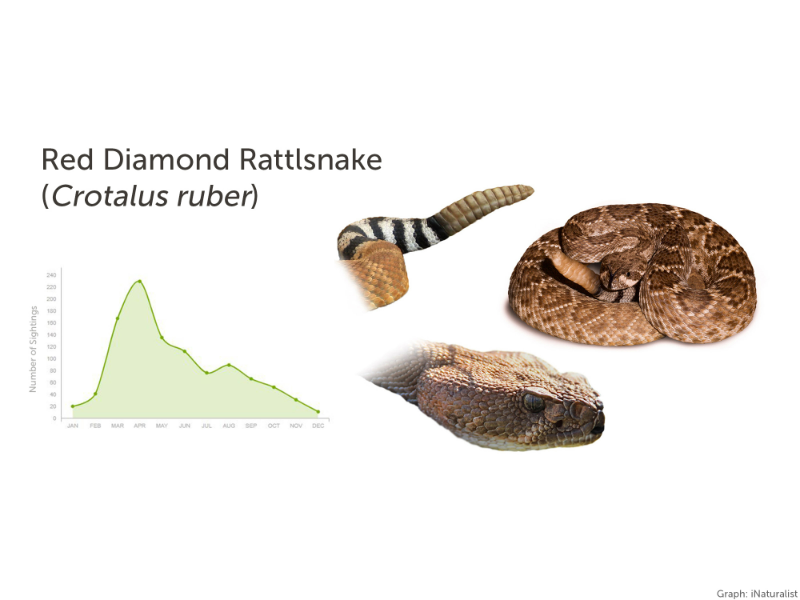 A truly beautiful animal, the red diamond rattlesnake has a ruddy-colored body with white diamond patterning along its back and several inches of distinct black and white rings just above its rattle. Red diamonds are big, often growing to five feet. Laurence Klauber also collected the largest red diamond rattlesnake on record. It too was five feet, four inches. This snake is listed as a species of special concern in California, as its range in our state is restricted mostly to San Diego and Riverside Counties (though it is found throughout the Baja California Peninsula). Red diamond rattlesnakes prefer habitats with chaparral, dense cacti stands, or boulders. 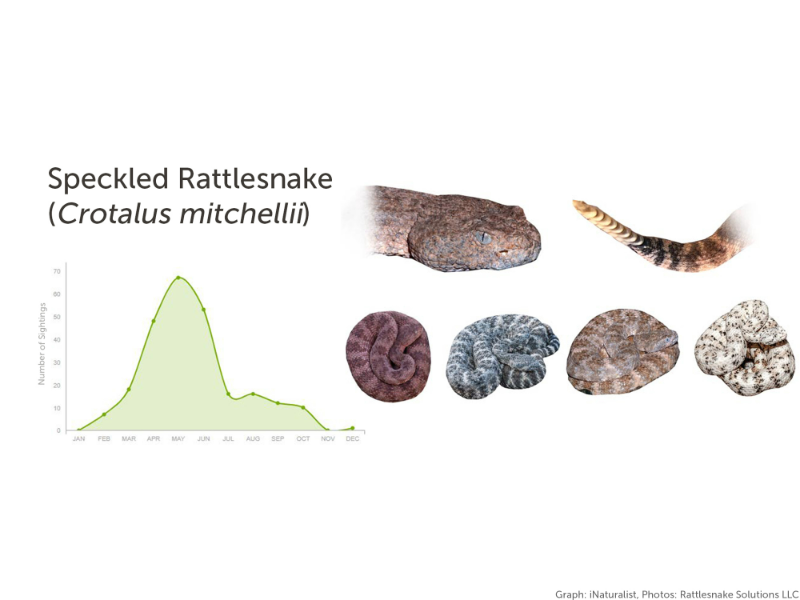 These snakes are smaller than the western or red diamond, reaching about two to three feet in length. They are highly variable in color and pattern. Depending on the rocks where they live, speckled rattlesnakes can be white with broken black stripes, pink with darker bands of rose, a 50/50 mix of salt and pepper, mottled blue-gray—the list goes on. These rattlesnakes are usually seen in rural areas, and are the least-commonly seen species in San Diego County. They prefer inland rocky habitats in forests, scrub, and deserts. 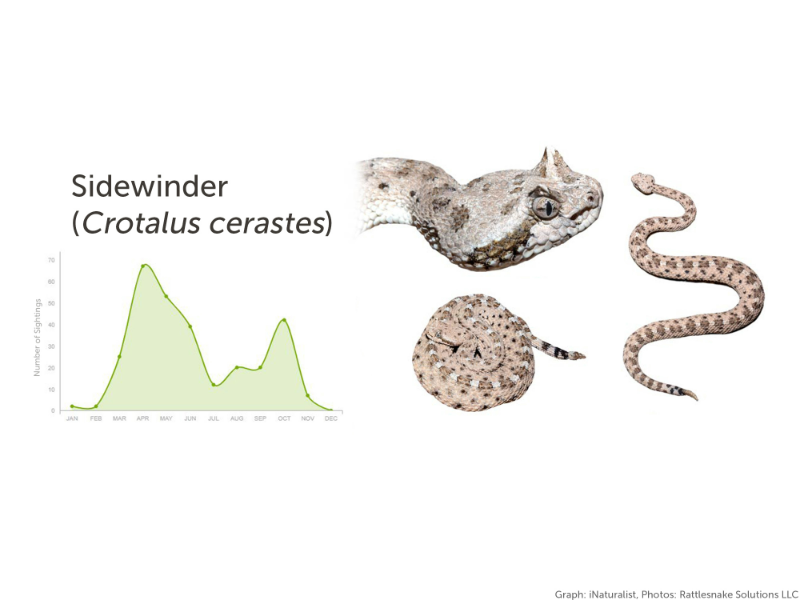 Sidewinders are an especially cool rattlesnake for several reasons. First, they have “horns” or supraocular scales on their heads, which protect their eyes from sand and sun. Second, they slither sideways! This is an adaptation to living in desert habitats. It minimizes the snake’s contact with the hot ground, and helps it move over sand more efficiently. These snakes are also shorter, maxing out at about two and a half feet. Similar to other rattlesnakes, they have a repeating blotch pattern along their back in a mix of brown and cream shades. Depending on the temperature, the sidewinder can slightly change its color, a process called metachrosis, which was described by—you guessed it—Laurence Klauber (the guy knew a lot about snakes). Sidewinders are only seen in the deserts of eastern San Diego County. 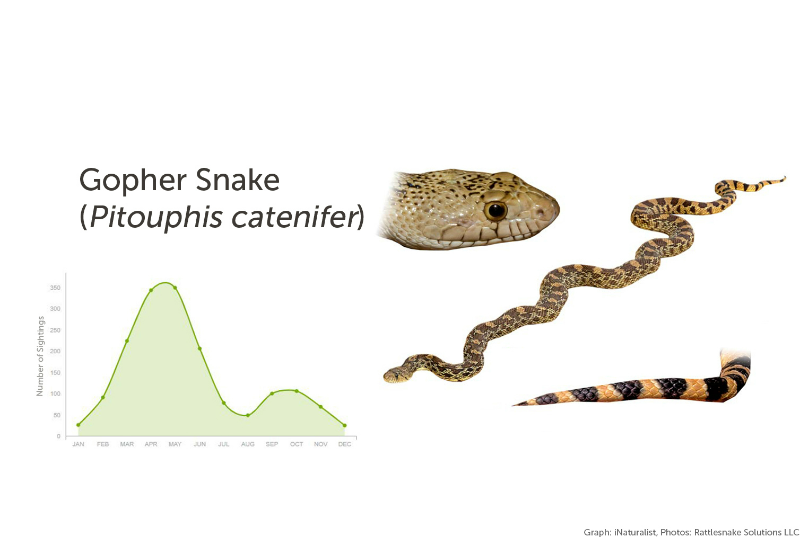 Gopher snakes are the ultimate posers. Not only do they resemble rattlesnakes, but they act like them too, and are very active around the same time of year. As a non-venomous species, gopher snakes have every reason to imitate their more dangerous counterparts. If a curious predator comes around, a gopher snake’s hissing, striking, and tail shaking could save their life. Unfortunately, this mimicry act is good enough to fool some humans into killing them.

Gopher snakes are very common and, similar to the western rattlesnake, are pretty tolerant of urban environments. They are large snakes, growing more than five feet long, with brown and yellowy-cream blotching and banding along their body. Their pupils are round, their tails are pointy, and they have a black “teardrop” marking between their eye and mouth. Although gopher snakes are non-venomous, their bite is still powerful and painful. They may not require a professional to remove them, but should still be regarded with caution and care. As their name suggests, Gopher snakes are excellent at controlling rodents, which in turn keeps venomous rattlesnakes (and disease) away.

For even more information about rattlesnakes, check out our FAQ on Rattlesnakes webpage, see the most recent sightings on iNaturalist, and browse the Amphibian and Reptile Atlas of Peninsular California.

"Rattlesnakes are among the most reasonable forms of dangerous wildlife: their first line of defense is to remain motionless; if you surprise them or cut off their retreat, they offer an audio warning; if you get too close, they head for cover. Venom is intended for prey so they're reluctant to bite, and 25 to 50 percent of all bites are dry - no venom is injected."  —Leslie Anthony, Snakebit: Confessions of a Herpetologist. Greystone Books, 2008