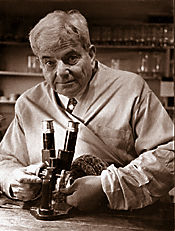 Driven by the pursuit of knowledge and the joy of discovery, Laurence M. Klauber (1883-1968) was an amateur naturalist who applied unusual skills and precision to his study of reptiles. Born in San Diego in 1883, he was a Renaissance man. He loved books, theatre, music, and opera, wrote poetry, served in several civic and scientific organizations, and held seven U.S. patents for his electrical inventions.

He rose through the ranks of San Diego Gas & Electric Company from an electric sign salesman to become president, then chairman and CEO. In the field of herpetology, he left his mark as the world authority on rattlesnakes. He was an outstanding scientist esteemed by his peers.

When horned lizards outnumbered people in San Diego, the young Laurence Klauber explored the local world of reptiles. In 1923, Mr. Klauber was asked by the San Diego Zoo to identify some snakes. He began studying books and actively corresponding with herpetologists, who encouraged him to conduct research and publish his findings. He wrote 100 scientific papers on the systematics of Southwest snakes and lizards and described 53 new species and subspecies of reptiles and amphibians. He was honored by other scientists with 14 new genera, species and subspecies named for him.

Fascinated with probabilities, he was a pioneer in applying statistical analysis to biology. "Night-driving" for snakes was a technique he invented by driving his car on desert roads. His research, which brought him face to face with more than 12,000 rattlesnakes in his lifetime, culminated in his monumental 1533-page definitive study Rattlesnakes: Their Habits, Life Histories, and Influence on Mankind, published in 1956.

Throughout his career, Klauber kept detailed journals of his daily life and research. By the time of his death in 1968, Klauber had meticulously chronicled his entire career - over 40 years of dedication to scientific pursuit.

Mr. Klauber put San Diego on the map in the field of herpetology. He donated 36,000 reptile and amphibian specimens to the San Diego Natural History Museum, including the most comprehensive collection of rattlesnakes in the world. A discriminating bibliophile, he amassed an extraordinary herpetological library: 1462 books, 19,000 pamphlets, 20 drawers of hand-written catalog cards, and 198 looseleaf binders of scientific notes, all generously donated to our Museum.

To honor a man of keen intellect and kindness of heart, who tirelessly pursued knowledge and generously shared information, the Museum dedicated REPTILES! Real and Robotic -- at the Museum February 21 to September 7, 1998 -- to Laurence M. Klauber.