The earliest beginnings of the San Diego Society of Natural History, the parent organization for the San Diego Natural History Museum, reveal a close connection with insects. The story, as reported in a San Diego Union newspaper article in 1934, discusses a conversation between two early San Diego residents.   Oliver Sanford, a surveyor for the railroad living in San Diego in the 1800s, collected beetles as well as plants. His friend, Daniel Cleveland, a lawyer, was also an amateur naturalist who collected plants. One day in 1874 Sanford said to Cleveland, 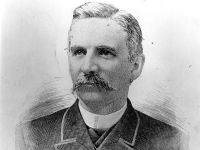 You know, Dan? There are some darned interesting beetles in this town. Come to the house and look over my collection; I’ll show you.

You realize, son, that I am a botanist, said Cleveland. I just sent my collection to Harvard University. But all phases of biology are of interest to the naturalist. May I call on you tomorrow night?

This conversation was reportedly the beginning of the San Diego Society of Natural History. Whether or not the conversation actually took place or not, in 1874 the two men did decide to form their own society devoted to local natural history at Cleveland’s law office during an informal meeting.