Fred Thorne was hired part-time to organize the collections. Due to his efforts, the Lepidoptera collection is one of the finest in California; he donated over 8500 of the mounted specimens collected primarily in San Diego County. William Hedges donated over 2600 Lepidoptera from Southern California and Arizona in addition to more than 4,000 specimens from other regions. David Faulkner.

David Faulkner was hired and worked in the department until 1993.

Donations of Lepidoptera specimens by Richard A. Mackie and Frank A. Forbes added 2200 and 2710 samples respectively, augmenting the representation of specimens from Baja California and southwestern U.S.

The Entomology collection grew by the more than 13,600 specimens donated by William McGuire.

A bronze, 5-foot rhinoceros beetle model cast by Ann Paul Barca from Encinitas was given to the Museum.

More than 1,000 specimens, mostly Diptera, were donated by Robert Parks.

Harbie died at age 85. He had arranged to donate his body to UCSD for research.

Richard W. Breedlove’s bequest of his specimens was added to the collection.

Arthur A. Lee’s collection of more than 3,200 specimens and reprints were donated to the Museum.

The exhibit “Insects: Face to Face,” curated by David Faulkner, was very successful. It featured beautiful butterflies and moths as well as displays devoted to fleas, lice and cockroaches. Giant robotic insects including a praying mantis and locust were also shown.

The Entomology Department now had 850,000 specimens.

David Faulkner became Collections Manager and remained at the Museum through 2000.

The multi-disciplinary Binational Expedition to El Vizcaino Reserve in Baja California brought an additional 3000 insect specimens to the department.

The William A. Hammer Collection of Lepidoptera, with more than 19,000 specimens, was transferred to the San Diego Natural History Museum from the California Academy of Sciences.

Dr. Paisley S. Cato assumed responsibility for the Entomology Collection. With funding from the Institute of Museum and Library Services and the Museum’s Capital Campaign, the collection was entirely rehoused into steel cabinetry in the new wing of the museum. Departmental space expanded from 700 to 1300 sq.ft.

Dr. Michael Wall became Curator of Entomology. Dr. Wall's research interests include the taxonomy and systematics of the Heteroptera as well as insect-plant interactions. 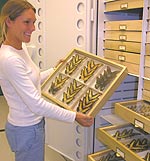 TODAY the Entomology Department currently holds about 980,000 specimens, with especially strong representation from the southwestern U.S., Baja California, and San Diego County. The collection is the only one of its kind in the county, and is important for use in environmental surveys and land use planning, since it houses examples of rare and endangered local species. It is supported in part through a 1974 bequest made in memory of Dr. John Adams Comstock, and periodic donations from The Sahan Daywi Foundation.