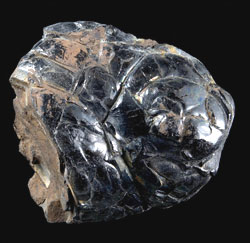 In Our Region :
In the Gulf of California, east of the tip of Baja, California.

Description:
This sea floor basalt poured out as lava into ocean water. When the molten lava contacted cold water, a jet black glassy rind instantly formed over this typical rounded shape. Additional injected lava cracked the rind and new rounded “pillows” grew next to it. Some such basalts accumulations can be dozens, even hundreds, of feet thick.

Origins:
In the Miocene Epoch Baja California separated from North America as the North American plate’s crust extended, then finally rifted, forming the Gulf of California. By Pliocene time, sea floor spreading began in the gulf, and it continues today as fresh sea floor basalt is added to the ocean floor.

This particular sea floor basalt in Fossil Mysteries was collected by Scripps Institution of Oceanography’s researchers. Sailing aboard the  R/V Revelle , scientists on the Alarcon Expedition dredged this basalt from the sea floor, thousands of feet below the ocean’s surface.

When analyzed chemically, scientists learned that the rock closely matches rocks from mid-ocean ridges under the Pacific Ocean. That was a surprise, since they expected this basalt to have traces of rock melt from the edge of the North American continent, as did basalts from further north in the gulf.

Studies like these add to our understanding of how landscapes in southern and Baja California have evolved over time. Because this very young rock looks like other Pacific Ocean sea floor rocks, we have learned that when the North American continent moved west over the mantle beneath the Pacific Ocean, rifting opened a “window” that allowed melted Pacific magma melt to rise and erupt into the waters of the gulf.