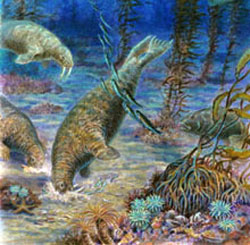 In Our Region
Chula Vista and National City, California

Description
This extinct species of walrus had a rotund, massive body covered with a layer of blubber. Closely related to our modern-day walrus,  Odobenus , it had a significant difference—it lacked all teeth in the lower jaw, and lacked upper teeth, except for two greatly enlarged canine teeth, or tusks.

This animal was a pinniped, a member of the group of marine carnivores including seals, sea lions and walruses, all having modified limbs that are wide and paddle-shaped, similar to fins. Pinnipeds evolved from land carnivores that returned to life in the sea.

Valenictus is unique among all pinnipeds because of its toothlessness (except for the tusks), a characteristic it shares with the modern narwhal and certain beaked whales.

An Inside Look
This new species of extinct walrus was discovered in 1989 in marine sandstones in Chula Vista, as reflected in the species name, chulavistensis. Chula Vista was also noteworthy as the first community in San Diego to require a paleontologist as part of a construction and grading project. The fossils from this animal were located in the San Diego Formation, a stratum of Pliocene-age sandstone in the Rancho del Rey and Otay Ranch area of Chula Vista, California. How did paleontologists decide this was a new species to science? The fossils recovered from this animal earlier had caused some confusion among paleontology staff at the Museum. The first fragment to be examined in the Museum was from a tusk, which had initially been incorrectly identified as belonging to a proboscidean. Later a jawbone was discovered, but the fact that it had no teeth was thought to be merely abnormal, since all other known walrus jawbones had teeth.

Finally an entire skull was found with the jawbones intact and, once again, lacking teeth other than the two large tusks. At this point the paleontologists realized that this was a species of walrus completely new to science.

In order to successfully share the same environment, these two species may have each specialized in a different food source. Biologists describe this mechanism as an example of "resource partitioning," a way for different species to co-exist without constantly competing for essential resources.

D. seftoni  had a complete set of teeth, and may have preferred prey items such as squid and fish. On the other hand, above its toothless jaw,  V. chulavistensis  had a long and deeply arched palate. This adaptation, shared with modern walruses, may have allowed  Valenictus  to eat marine invertebrates found on the sea floor.

The diet of modern walruses consists almost exclusively of thin-shelled marine bivalves, such as clams. They swallow their food whole, without chewing it first. They have flat noses or snouts that they use to plow through the sea floor in search of clams or other bivalves, which they are able to sense with their very sensitive facial bristles or vibrissae.

When they encounter a clam bed, they use their muscular tongue to create strong suction against the arched palate so that they are able to literally suck the soft body of the clam out of its shell, discarding the empty shells when they are finished. From close observations of the palate of  V. chulavistensis , we can make an educated guess that this species was also able to eat bivalves the same way.

Odobenus rosmarus  is the scientific name of our living species of walrus and it occurs in the shallow coastal regions of the Arctic Ocean.

Because they are such large animals, they need a lot of food to sustain them. Some have been reported as eating as many as six clams per minute! Adult males weigh up to 3740 pounds (1700 kg), with females weighing as much as 2750 pounds (1250 kg).

Walruses have very tough, wrinkled skin and a thick layer of blubber to provide insulation in cold waters and protect against ice damage. They have bulging eyes, and males have distinctive large tubercles on the extra thick skin around their neck. These tubercles help to protect them during battles over territory.

The tusks of walruses are remarkable. Both males and females have huge tusks which grow throughout their lives. There is enamel only on the tip of the tusk, while the rest is formed of ivory or dentin. Wear may occur on the front face of the tusks from being dragged and abraded along the ocean floor, or across ice floes.

Tusks serve many purposes. They are primarily used for display and as weapons during fights with other walruses, killer whales, and polar bears. Sometimes individuals will break off a tusk during battles. They also aid the animal when it wants to haul out on ice floes, or break through ice to make a breathing hole. Tusks can serve as a kind of sled, as walruses root along the sea floor for bivalves.

Walruses have many vocalizations, both underwater and on the ice or land. They bark, roar, whistle, cough, and have special alarm calls. Males have specialized air sacs in the neck that allow them to make bell-like sounds that have been compared to a gong being struck. These vocalizations are an important part of their social and gregarious behavior.

These animals can dive for as long as 10 minutes while they search for food on the sea bottom. They live for about 40 years and females are able to reproduce after the age of nine years, giving birth to a single calf. Calves remain with a group of protective females for several years. The bond between mother and calf is very strong, and nursing continues for two years. Although the calves can swim immediately, babies may be carried on the mother's back for awhile.

Populations of walruses have been declining for many years due to the trade in oil, hides and ivory.