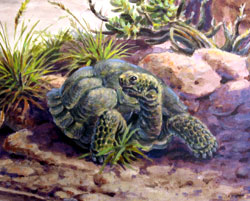 In Our Region
Chula Vista, California

Description
This herbivorous tortoise probably looked very similar to our modern day  Gopherus  tortoise, which has a high, domed carapace or shell, cylindrical hind legs, and front feet modified for digging. Walking on strong legs,  Gopherus  and other members of the tortoise family such as  Geochelone  are the most clearly adapted turtles for living on land.

Members of this family of turtles are first recognized in Eocene-age rocks of western North America. They may have evolved in Asia, but eventually spread to North and South America. Most other modern families of turtles evolved much earlier, in Cretaceous times. The genus  Gopherus  still has living members. 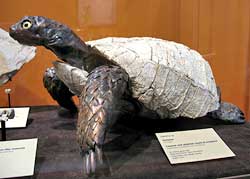 Ecology
Gopherus  tortoises today live in harsh climates, such as the Mojave and Sonoran Deserts, where they are subjected to extreme temperature fluctuations during a typical 24 hour period. The tortoises often construct large burrows, where temperature and humidity are kept more constant. Several tortoises may share a burrow.

There is evidence, however, that during the Pleistocene and earlier epochs, these tortoises were found in cooler, less extreme climates and that they did not originally evolve in desert habitats.

Selective herbivores, tortoises eat flowers, grasses, cacti, fruits and other plant parts. Often they eat enough during the spring annual bloom after rains come to sustain themselves through dormancy periods. Large and slow-moving, tortoises have little means for defense and are vulnerable to predators despite their large size.

These animals hold up to 40% of the water in their bodies in their bladder, and when disturbed, may discharge the contents of the bladder as a last ditch defense mechanism. This is one of the reasons why it is never advisable to disturb or touch tortoises. After losing that much water, the animal may be unable to recover and may die due to dehydration.

Sexual maturity is not reached till after 15 -20 years of age. Predators of  Gopherus  tortoises and tortoise eggs include coyotes, bobcats, foxes, snakes, hawks and eagles.

Several species of  Gopherus  tortoise are considered endangered or threatened; baby hatchlings have a very high mortality rate and in most areas their numbers are greatly reduced. Their habitats also have become reduced through human activities, such as grazing, housing developments, and off-road vehicle use.

People have long thought that tortoise meat made good eating. There is early historical evidence that they were eaten by humans, and archaeologists have recovered charred tortoise bone fossils. Whether or not this has hastened the decline of the tortoise populations, such as the extinct species, is not known.