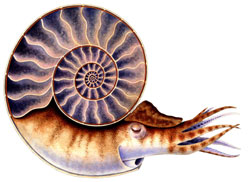 Place
Ammonites were probably found in all depths of the ancient oceans.

In Our Region
Carlsbad, La Jolla, and Point Loma, in California. Also from Salsipeudes and Santa Catarina, Mexico.

Description
Related to the living chambered Nautilus, ammonites are extinct members of the group of marine animals called cephalopods, which include such other living species as squid, cuttlefish, and octopi. Pachydiscus caterinae is a large species of coiled ammonite, with shells measuring up to 3 feet (1 meter) in diameter.

Ammonites were free-swimming mollusks that had external shells that were either straight or coiled. Although we lack fossilized soft parts for ammonites, we assume their bodies were similar to those of the chambered Nautilus. The Nautilus has a fleshy head equipped with a beak and very well-developed eyes, clustered in the middle of tentacles used for catching prey.

The shells of ammonites were divided into chambers by intricately folded walls or septae. These walls left distinct suture lines where they joined with the outer shell, making patterns that are important in ammonite classification.

The animal lived in the outermost chamber of the shell. As the animal grew, the old chambers could be filled with gas or liquid, in order to regulate the animal's buoyancy in the water, much like buoyancy tanks in a submarine. As a counterbalance, some of the chambers had calcareous deposits acting as ballast.

The smallest ammonite species had shells less than an inch in size, but the larger, coiled species were huge—some reached more than 9 feet (3 meters) in diameter! 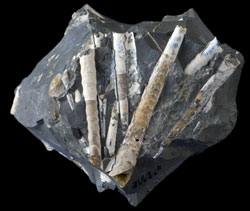 There was an amazing diversity in the variety of shapes and ornamentation of ammonites. In addition to the typical coiled shape, ammonites in the heteromorph group could be straight like a tusk, or helically coiled, or even shaped like a compressed paper clip. Many ammonite shells have knobs, spines, tubercles, or ribs, which may have helped in defense from predators.

The genus Baculites included many species of straight-shelled ammonites, which only displayed a coiled form as juveniles. The shells could reach up to 6.5 feet (2 meters) in length. Males were believed to be only about half the size of females. Most scientists think they occupied a vertical orientation in the water column.

Nautiloids are another related group of cephalopods, distinguished from the ammonoids by the fact that the septa separating each chamber had a simple form, rather than being convoluted as in the ammonites. Nautiloids also had external shells, and although their species once numbered over 100, there are only five or six living species left, all within the Nautilus and Allonautilus genera.

Ecology
Paleontologists are still debating whether or not ammonites were good swimmers. Some ammonites are thought to have been capable of moving through the water by a type of jet propulsion. However, the spines and ribs on many of the shells would have greatly increased the amount of drag through the water, making them a lot less efficient. Because this is such a varied group, it is likely there was also a lot of variation in their swimming ability and speed.

We know that ammonites were carnivorous marine animals, but we have little data on what they actually ate. The rare ammonite fossils that have been recovered with evidence of food in the living chamber reveal tiny benthic animals known as ostracods and foraminiferans, or larger animals such as echinoderms, the group including sea urchins, sea stars, and sand dollars.

Some ammonites were sexually dimorphic, with the male (called the microconch) being far smaller than the female (the macroconch). The two sexes look so different that for a long time they were believed to be separate species.

Tooth marks on some ammonite shells indicate they were preyed upon by marine reptiles.

With more than 10,000 species of ammonites known from the fossil record, this group is one of the most characteristic marine fossils of Cretaceous-age rocks around the world. Because they were so diverse, ammonites are considered an index fossil.

An Inside Look
Brad Riney of the San Diego Natural History Museum has collected many ammonites for the Research Collections in the Paleontology Department. Some of them have weighed as much as 300 pounds.

The fossil evidence suggests that ammonites often served as reef structures after the animal died and the shell settled on the seafloor. Many are covered with boring sponges and other colonizing marine invertebrates. Along with the adult ammonites, Brad has also collected juvenile ammonites, as well as fossilized clams, snails and cowries.

Of Historical Interest
Beautiful ammonite shells have been collected by people for millennia. During medieval times they were believed to be snakes that had been turned into stone, and were sold to people going on pilgrimages. They have been found in archaeological sites in many parts of the world.