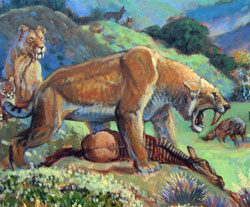 In Our Region:
Rancho La Brea

Description:
Smilodon fatalis  was not quite as large as the modern African lion. It stood about 40 inches (100 cm) high at shoulder. Along with very powerful limbs, the sabertooth cat was armed with extremely long, curved upper canines with sharp serrations on both sides. Unlike the lion or cheetah, these animals had short tails. 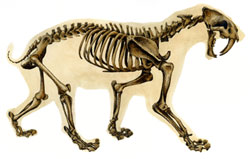 Ecology:
At Rancho La Brea, the sabertooth cat was the second most commonly encountered fossil, next to the dire wolf. It has been designated as the California state fossil.

A fearsome predator, the sabertooth cat most likely used stealth techniques to ambush its prey, rather than speed. However, it could probably run as fast as 30 mph (48 km) for short bursts.

Some paleontologists believe that these cats were social animals. Maternal care of the young was probably important for these cats, as it is for all cats. There is some evidence they may have hunted cooperatively, preying on animals larger than themselves such as bison, camels, and horses.

However, recent studies of Smilodon fossil skeletons show that unlike social lions today, the sizes of the male and female canine teeth are nearly the same. Living lions in their prides typically have one male and several females. The large male has canine teeth much larger than any female’s canines. This example of sexual dimorphism in modern lions’ teeth is not found in Smilodon, and for that reasonSmilodon is not thought to have been a cat that lived in social groups.

Many fossilized sabertooth cat bones display damage from arthritis and/or heavy injuries, some of which had been allowed to heal.

Fossil remains of two other species within the genus Smilodon have been found, S. populator and S. gracilis. Fossils of Smilodon gracilis have been discovered mostly from eastern North America, although remains have also been found from the Anza-Borrego Desert. This species was the smallest of the three.S. populator was the most massive, as large as an African lion, with canines that protruded up to 7 inches (18 cm) from the jaw. Remains of S. populator have been found in South America. Smilodon fatalis is considered to be intermediate in size between the two other species.