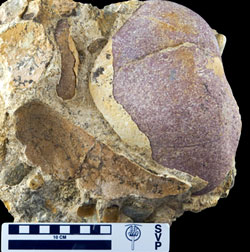 Between 56 and 36 million years ago, this rounded rhyolite cobble was incorporated into a conglomerate in a sandstone matrix with other rounded rocks.

Much earlier, between 155 to 150 million years ago, this rhyolite rock formed from magma spewing out of volcanoes that made mountains of rhyolitic lava and ash.

Place:
These rhyolite cobbles are common in ancient Eocene sand and gravel deposits of western San Diego County. But a mystery puzzled geologists—where is the bedrock source for these rocks? They don’t match chemically with local mountains. 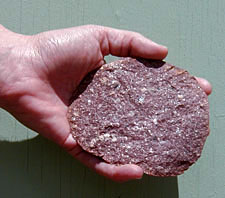 Description:
Rhyolite cobbles are river-worn cobbles of igneous rock. They are usually reddish-purple, and sometimes gray. They are very hard to break with a hammer and contain quartz and feldspar crystals.

The mystery of the origin of rhyolite rocks in San Diego can be explained keeping in mind the concept of geologic time, and earth processes that take place over millions of years.

Red rhyolite rocks found today on San Diego beaches actually had their origin over 180 miles away in the mountains of Sonora, Mexico. How did they end up here? In Sonora these purplish-red rocks were originally formed from the cooling magma of volcanoes. They are especially rich in silica.

Rhyolite magma does not make a typical lava flow, but instead explosively blasts out, after which the fragments fall to the ground, congeal, and are deposited in layers of rock.

Over millions of years, these rocks gradually eroded out of the mountains of Sonora and were washed down rivers, to the west, becoming rounded into cobbles or pebbles by the process. They were deposited on the western coast of Mexico some time between 35 and 48 million years ago.

When the action of plate tectonics split Baja California and the southern California peninsula away from the Mexican mainland, the bedrock of rhyolite that is the origin of these rocks remained in Sonora, while the gravels were moved along with the peninsula to their current placement in San Diego.