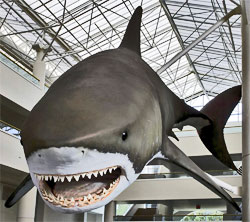 Among the most ancient vertebrates on Earth, sharks first appeared in ancient oceans during the Silurian Period, more than 400 million years ago. This means they were living almost 200 million years before the dinosaurs existed!

Place
The teeth of the giant "megatooth" shark have been found in North and South America, Europe, Australia, India, Japan, and Africa. Scientists believe the shark flourished in warm waters throughout the world.

In Our Region
San Diego Natural History Museum paleontology staff collected teeth from this giant species of shark from Miocene sandstones in Oceanside, California and near Ensenada, Baja California.

Carcharodon megalodon represents the largest, meat-eating fish to have ever lived. The information we have about its size is drawn from comparisons with living sharks and the relationship between tooth size and total body length. Based on this information we can estimate the overall dimensions of this huge animal.

Shark skeletons are composed of cartilage, not bone. Since cartilage decomposes very rapidly, fossil shark skeletons are extremely rare. Paleontologists must rely mainly on examining shark teeth, dermal scales, and calcified vertebrae to draw their conclusions about this very successful group of vertebrates.

An Inside Look Shark
classification is based mainly on shape of the teeth, serration patterns, and presence or absence of denticles. This chart demonstrates the relationship between the size of a shark's teeth and the size of its body. The larger the tooth, the larger the shark. 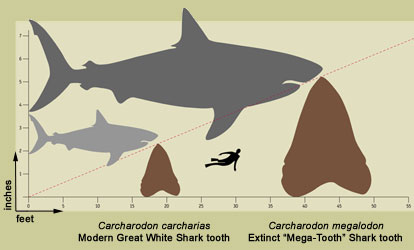 Ecology
We don't know much about the specific diet of C. megalodon, but we do know that Great White Sharks today favor seals and other large vertebrates as their prey. Paleontologists have found whale vertebrae as well as flipper bones with large bite marks made by serrated teeth. That serration pattern matches the teeth of C. megalodon, so we can conclude that it is likely that this giant shark also preyed upon whales.

Carcharodon megalodon may have hunted using the same stealthy technique that today's Great White Sharks have been known to employ to capture pinnipeds, stalking their prey from deeper waters and then swimming up at full speed to deliver a massive bite.

Why did the Giant "Mega-Tooth" Shark become extinct? Perhaps the reduction in ocean temperatures in the mid-Pliocene affected this species, which preferred warm waters. Another possibility is that their favored prey species, such as the baleen whales, had begun to migrate to colder waters where the giant sharks could not thrive. 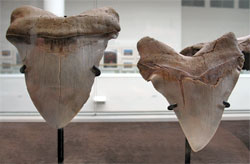 Of Historical Interest
Sharks' teeth have always fascinated those who have encountered them. In the 1600s, Nicholas Steno, a physician, published a book stating that the mysterious "tongue stones," so-called because of their shape, which had been found in the crumbling cliffs of the island of Malta for many centuries, were really analogous to the teeth of modern-day sharks. As an early paleontologist, he reasoned that these fossilized teeth belonged to sharks that existed long ago.

Check out photos of how our megalodon was fabricated for the exhibition.