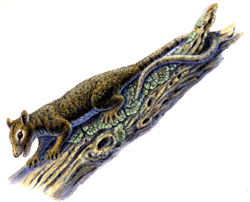 Around 45 million years ago
Peratherium fossils have been found in North America, northern Africa, Europe, and South America.

In Our Region:
San Diego

Description:
Peratherium  belonged to the marsupial branch of the mammals. As indicated by its skull, teeth, and skeletal elements, it would have looked like a small (rat-sized) opossum. As in modern marsupials, females of  Peratherium  possessed a pouch outside the body where the young, which were born blind and very premature, could suckle milk and grow. In contrast, placental mammals have their young develop internally in the mother’s womb, nourished by the placenta. These two major groups of mammals diverged around 110 million years ago from a common mammal ancestor in the early Cretaceous Period in North America. Both marsupials and placentals survived the great extinction of the dinosaurs, which occurred 65 million years ago.

Later, around 45 million years ago,  Peratherium  was a conspicuous inhabitant of San Diego’s Eocene subtropical forests. Its fossil teeth and bones are particularly common in the Friars Formation. Peratherium  is also known from numerous other Eocene formations in western North America. 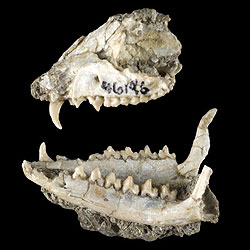 Marsupials were plentiful during the Eocene. An even smaller opossum-like genus,  Peradectes , lived alongside  Peratherium  in the San Diego region. Its fossils are rarer and less complete than those of Peratherium . Both of these marsupials had tiny fragile bones that are unlikely to be preserved as fossils. Usually, durable teeth are the only clues to their former presence. In rare cases such as the Eocene lake beds at Messel, Germany, whole skeletons of these ancient Eocene animals have been discovered.

Our Virginia Opossum found foraging at dusk in local yards and gardens was introduced to the Pacific Coast in 1890.