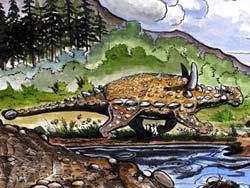 Place
This particular species,  Aletopelta coombsi , has only been found in Carlsbad, California. However, other ankylosaurs and nodosaurs have been found in the western United States and Kansas, Canada, England, Portugal, France, Austria, and Australia. 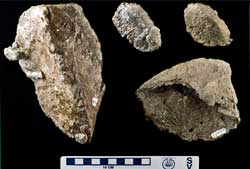 Description
Ankylosaurs were sturdy, armored dinosaurs, distantly related to the stegosaurs, with their large bony plates and tail spikes. Much of the body of ankylosaurs was encased in bony dermal armor consisting of scutes embedded in the skin. There are two main groups of ankylosaurs, the narrow-headed nodosaurids and the broad-headed, club-tailed ankylosaurids. They moved on all four limbs, and ranged in size from 5 feet (1.6 meters) to 25 feet (7.6 meters) long. This particular specimen stood about 4 feet (1.2 meters) tall and was approximately 13 feet (4 meters) long overall.

Ecology
These dinosaurs ate plants, and from the delicate nature of their teeth we assume that they did not eat tough plants. Perhaps they preferred algae growing in water.

Some of the bones at Carlsbad were encrusted with fossilized oysters, so we know that the skeleton of this dinosaur sank to the ocean bottom and was later colonized by marine invertebrates. Mixed in the matrix was also a shark tooth, suggesting that sharks might have scavenged the carcass.

Other fossil remains of armored dinosaurs from Wyoming, Texas, and Kansas have been found in marine sediments, so some scientists have suggested the animals could have been aquatic. However, it is more likely that they foraged for plants along the edges of rivers and estuaries and when they died, their remains might have been carried out to sea. Although they weren't marine animals, their remains, along with sediments from the land, were all buried at sea. 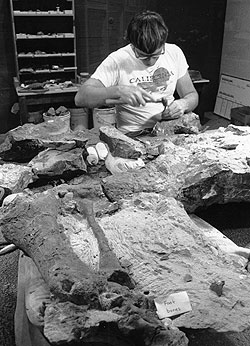 An Inside Look
San Diego Natural History Museum field paleontologist Brad Riney discovered this armored dinosaur in Carlsbad, California near College Boulevard in 1987 during a road extension project. At the time, Riney noticed dark brown fossil bones exposed where a backhoe had cut a trench into a mudstone stratum.

From geologic mapping, he knew that the rock could be dated to be about 75 million years old, from the Cretaceous Period. Most other fossils recovered from the Cretaceous mudstones at Carlsbad were marine invertebrates. Paleontologists rarely found fossil bones there, although years earlier Riney had recovered duck-billed hadrosaur fossils nearby.

Once a distinctive leaf-shaped fossilized tooth was unearthed at the Carlsbad site, it became clear that this new discovery represented a different dinosaur—either an ankylosaur or a nodosaur, both members of the taxonomic order Ankylosauria.

The paleontologists worked for several days to carefully free the fossils to the point that they could be transported back to the Museum. Working patiently to extract the fossils, they were excited to see they had recovered the complete hindquarters of the animal, including both back legs still connected to the pelvic bones. 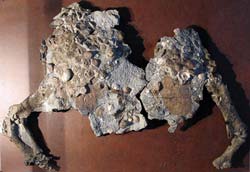 Not only that, but much of the pelvic dermal armor was still attached to the hip bones, which meant that the original arrangement was preserved. Overall, the dermal armor consisted of thick shoulder scutes and elongate spikes, low keeled lateral scutes, and an interlocking system of polygonal scutes that covered the entire pelvic region. A total of eight teeth were also found.

Originally described as a nodosaurid, this specimen has more recently been classified as an ankylosaurid. Because the skull and tail portions of this fossil were not found, its identification will remain equivocal. If it is a nodosaur it should have a narrow head and clubless tail. As an ankylosaur it would have a broad head and a bony tail club. In 2001, the Carlsbad specimen was named Aletopelta coombsi, making it the only formally named dinosaur from California, and the most complete dinosaur skeleton ever found in California.

See our online educational activities to explore more about this dinosaur!

Further Investigation
How the bony spikes were placed on the body is still unknown. Whether or not these animals lived in or near estuaries or were upland dwellers is not known.