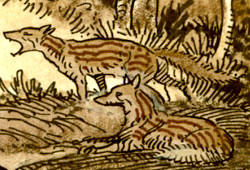 The ancestry of dog-like carnivores, as well as cat-like carnivores, goes back to the miacids, a group of carnivorans from some 45 mya, which shared certain features, miacids, such as Tapocyon, had retractable claws like a cat, but had broad back molar teeth like a dog. These two groups diverged about 40 mya, with the ancestors of dogs, bears, weasels, raccoons, and seals going off in one evolutionary direction, while the ancestors of cats, hyenas, and civets diverged in another direction.

Place
Mesocyon coryphaeus  has been collected from central Oregon in the John Day Formation, and in California.

In Our Region
These fossils were found at East Lake and Otay Ranch, in Chula Vista, California. 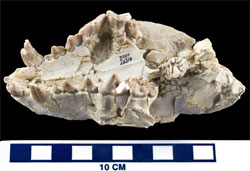 Description
Mesocyon was a short-faced canid, about the size of a coyote. Like all true dogs, it had legs adapted for running, had large earbones that were adapted for better hearing, and a dentition that functioned both in shearing flesh and in crushing bones.

Mesocyon had what scientists call digitigrade feet, which means that it was able to stand or walk on its toes, an adaptation that increased stride length and thus speed. When paleontologists examine these fossils, they see that the long bones of the toes are packed very close together, unlike what we see in plantigrade animals, or those that walk flat-footed. 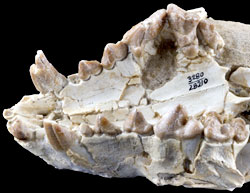 Ecology
Canids are genetically quite distinct from other groups. Displaying great diversity, they are the most ancient of all the carnivorans. Over a period of approximately 37 million years, at least 140 species of dogs evolved and became extinct in North America.

The trend toward greatly reduced forest lands and more open grasslands which occurred during the Oligocene may have promoted the evolution of dog-like animals. We can hypothesize that dogs evolved and learned to run down their prey in environments where open grasslands became more common than thickly forested landscapes.

Dogs exploited long-distance pursuit as a strategy for capturing prey in increasingly open habitats. Cats do not do as well in open habitats as they generally stalk their prey, and need cover to hide behind.

As we observe in our own domestic dogs, fossil canids probably had an excellent sense of smell, a wide range of hearing, and good vision. They also had the advantage of being able to live on a variety of foods, and could be considered omnivores.

Wild relatives living today include three families—wolves, foxes, and coyotes. They inhabit every continent except Antarctica, so it is clear that they are adaptable to extremely variable habitats, from deserts to rain forests.

Further Investigation
Although scientists disagree as to how long ago dogs became domesticated, we do know that the human-canine connection goes way back, possibly as long as 15,000 years.

But how did dogs become domesticated? Many hypotheses exist, one being that dogs may have hung around places of early human occupation, scavenging scraps and benefiting from human hunting. Perhaps they were used as a food source themselves. Eventually their presence either became beneficial to humans in terms of their superior hearing and sense of smell, or some other factor came into play.

Genetic evidence indicates that domestic dogs came to the New World along with humans, migrating over the Bering Strait some 12,000 years ago. We still have much to learn about the process of the domestication of dogs.

Suggested Reading
Wayne, Robert K. 1993. Phylogenetic relationships of canids to other carnivores. In Miller's Anatomy of the Dog. Philadelphia: W. B. Saunders.