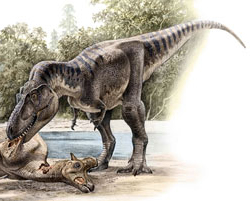 Place:
Albertosaurus  is a North American dinosaur. Most albertosaurs have been found in Canada; others are known from Alaska, Montana, Wyoming, New Mexico and Baja California.

In Our Region :
Northern Baja California

Description:
Albertosaurus libratus was a large, meat-eating dinosaur, with a big, wide-muzzled head, small fore-limbs and strong back legs. The body was carried on the back legs, or bipedally. Three functional toes gave this dinosaur a bird-like footprint. Each small forelimb ended in a two-fingered “hand” with claws. This dinosaur has been described as a lighter, smaller version of Tyrannosaurus rex. Adults reached up to 30 feet (9 meters) in length.

The strong skull and jaws of Albertosaurus held around 80 banana-shaped teeth with thickly rounded serrations. As in most tyrannosaurids, Albertosaurus had skull ornamentation in the form of small hornlike projections of bone on top of the head.

Ecology:
The eyes were forward looking and probably gave this animal good depth perception. As is common for many predators, A. libratus probably enjoyed a very keen sense of smell as well as excellent vision.

Albertosaurus probably hunted hadrosaurs, the duck-billed dinosaurs, among other prey. Scientists believe that these dinosaurs may have hunted in packs.

Although there has been much discussion about whether tyrannosaurids such as Albertosaurus were predators or scavengers, it is actually likely that they utilized both feeding strategies, capturing live prey when possible but scavenging if they happened on to a carcass.

Recent groundbreaking studies of vision in theropods, and especially in tyrannosaurid dinosaurs, however, make a good case for their exceptional depth perception, heightened ability to detect movement, and even the capacity to detect quite subtle color contrasts in their visual field. These are precisely the abilities needed by predators.

Scientific classification of Albertosaurus has been revised several times and may change further as more specimens are discovered. For example, Albertosaurus and Gorgosaurus may be two names given to the same animal, or they may be different enough to require their distinct names. 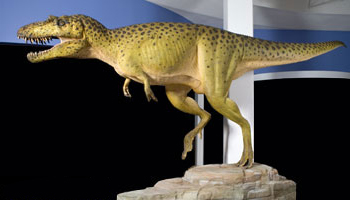