The earliest record of packrats occurs in the late Miocene, 6.6 mya . Packrats are an example of what we call "Pleistocene survivors," which means that they are still alive today.

Place
There are presently 21 living species of Neotoma , occurring in a very wide range of habitats, from the edge of the Arctic Circle all the way to the tropics of Nicaragua. They occur throughout western Canada, most of the U.S., Mexico and Central America.

In Our Region
Packrats are found throughout California and Baja California. 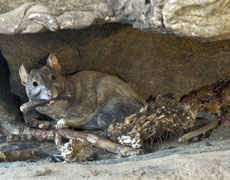 An Inside Look
Because of their habits, packrats provide paleontologists with critical clues about past climates, especially in dry western North America. Since some packrat middens are as old as 40,000 years, they function as biological time capsules, preserving fossil examples of representative plants, pollen, and even animal bones from Pleistocene communities.

The term "midden" is an archaeological term that refers to a heap of garbage or trash left behind by former occupants. Packrats create middens in their dens because they tend to urinate with very viscous urine over their garbage piles, and the urine acts as a preservative which solidifies the mass, especially in arid environments.

These animals excrete copious amount of urine, normally in one spot or "post" in the den, which also serves as a scent mark to identify their territory. Over time the urine then crystallizes almost like amber. This preserves the fossilized record of plant remains, and has provided scientists with a window into past communities of plants and animals in a particular area.

Description
Packrats (also called trade rats or woodrats) have a rat-like appearance, with large ears, long tails and large black eyes. How do you tell a "city rat", or Old World rat, from a packrat or woodrat? Packrats' tails are not naked and scaly like a city rat. Packrats have very long whiskers and a whitish or light colored neck and breast area.

Ecology
Because packrat species are still thriving today, we know a lot about their ecology. Thus we can assume that those animals living during previous epochs were similar to what we observe currently.

Different species of packrats live at various elevations, from spruce-fir forests at high elevations in their northern limits, to low deserts at the southern limits of their distribution. They have two critical requirements: the presence of succulent plants for food, and adequate shelter. Many species of packrat obtain all their water from the plant materials they consume.

Almost all packrats construct dens, whether they are made of sticks, plant materials, rocks, bones, dung, or other materials. Some packrats take advantage of crevices in rocks or caves to find shelter. Some packrat dens are very large, reaching a height of 6.5 feet (2 meters) or more. The dens provide three important benefits: protection from predators, a buffer against extreme temperatures, and a place for food storage.

The dens may have several rooms and may hold large food caches, containing as much as 3 bushels of plant materials. The temperature inside is remarkably stable due to the insulating effect of all the piled up sticks and building materials. Inside the den, packrats make a cozy nest of shredded soft plant fibers, similar to a bird nest, which offers additional protection against extremes in temperatures.

As protection against coyotes and other predators, many dens are fortified with cactus spines, thorns, or other sharp objects.

Other species often inhabit the dens, such as box turtles, skinks, lizards, and other rodents. Normally only one packrat at a time inhabits each den, except during breeding season or when the litter is born. A litter consists of between one and four babies.

Other rodents, such as dassie rats, stick-nest rats, and hyraxes create middens in other arid parts of the world, such as Africa, Australia and the Middle East.