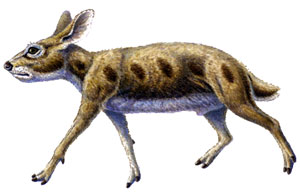 Place
Only in California.

In Our Region
Near Chula Vista, and Carlsbad, California

Description
Sespia californica was a small herbivore, about the size of a domestic cat, with large eyes very high on the skull. A member of a group called oreodonts, these animals were distantly related to living pigs and camels. Their small, hooved feet were similar to that of a pig or a deer, and are classified as artiodactyls, or even-toed mammals. 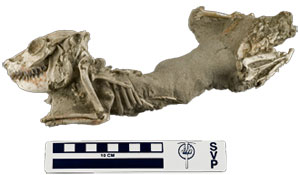 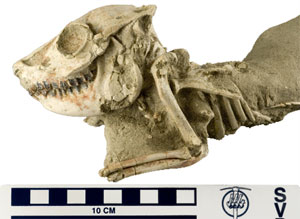 An Inside Look These fossils were found by San Diego Natural History Museum paleontologists in the Otay Formation in East Lake and at Otay Ranch near Olympic Parkway in Chula Vista.

There was much excitement when the first fossils were found at the East Lake area, since previously geologists were convinced that the area would not be productive for fossil hunting. When the earthmovers and graders began clearing away the topsoil for this development in 1985, paleontologists in the field noted fossil bones and fragments in the exposed sedimentary rocks, in a sandy siltstone matrix.

Collectors Brad Riney and Richard Cerutti discovered an abundance of Sespia jaw bones in the Otay Formation which was first assumed to be from the Miocene Epoch, but was later found to actually be much older, from the Oligocene Epoch.

The scientists recovered many more jawbones and palates of Sespia at East Lake than any other parts of the skeleton, such as leg bones. Can you think of why this would be the case? Paleontologists believe this is a function of "selective feeding" on the part of predators. Probably the rest of the body of this small mammal offered a more tasty dinner than chewing on the head, resulting in unusually large numbers of jaw bones relative to the other bones being left for discovery.

Since 1985, an abundant number of fossils have been recovered at this area, making it one of the larger such Oligocene faunal assemblages in the western U. S. Scientists used radiometric dating of rocks to determine the age of the fossils contained within the strata at approximately 29-30 mya.

Ecology
The lifestyle of Sespia is a bit of a mystery. Fossils from this animal are very numerous, suggesting that they were once as common as rabbits, and may have lived in dense social groups. Fossils of close relatives to these animals were discovered in Wyoming; they were found buried in what appeared to be a burrow, along with young ones.

Large ears and ear bones suggest that hearing and sound communication was very important to their survival. Perhaps they lived in communities similar to that of prairie dogs today. Browsers or grazers on grasslands of the time, they were probably the principal prey species for large carnivores in the area, such as short-faced dogs and the cat-like Nimravus.

Further Investigation
Why was this species only found in California? Or will paleontologists discover them in other areas in the future?