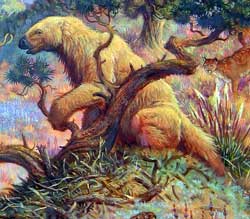 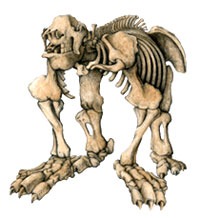 Description
Giant ground sloths have to be among the strangest mammals that ever walked on Earth. Their living relatives include the tree sloths, and more distantly the anteaters, and armadillos. Unlike living tree sloths, the extinct sloths were large, ponderous animals that presumably spent all their time on the ground.

Three different genera of ground sloths lived in southern California until around 13,000 years ago— Nothrotheriops, Megalonyx and Paramylodon . Nothrotheriops was the smallest of the three, reaching upto 9 feet long (2.76 meters), with a weight up to 550 pounds (250 kg), about the size of a black bear. Shasta ground sloths lacked front teeth and the other teeth in their tubular snout were small and blunt. Huge claws on their feet were a striking feature.

Due to a special modification of the foot, the weight of the animal was actually borne by the heel bone and the outside edge of the foot. Because of this, scientists believe that ground sloths must have walked with a waddling motion. 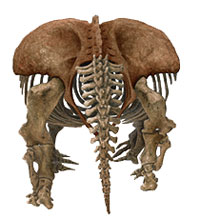 The three genera that lived in our region may have specialized in different food sources, thus eliminating one possible source of competition. Fossilized dung shows that Nothrotheriops shastensis fed on many species of plants such as yuccas, agaves, Joshua trees, globe mallows, mesquite and cacti. These animals were especially adapted to life in arid regions.

Megalonyx jeffersonii , on the other hand, may have specialized in eating leaves and twigs from trees such as willow and other trees of moist habitats. Megalonyx weighed nearly a ton, about the size of a bison. Ground sloths were able to stand up on their hind legs, in order to reach the leaves and twigs they wanted to eat. They also could have squatted on their haunches to pull down higher branches off trees if needed.

Teeth of the third species, Paramylodon harlani , suggest it grazed on grasses in open habitats. Slightly larger than Megalonyx, Paramylodon is the most common ground sloth from Rancho La Brea.

A strange anatomical feature of some ground sloths was the presence of dermal ossicles, or small nodules of bone, which formed in the skin, under the fur. Found frequently in reptiles, these ossicles are extremely rare in mammals. In modern mammals, similar structures are only seen in the armadillos.

Pieces of dried skin with ossicles intact were found in Anza-Borrego Desert from the Harlan's Ground Sloth, Paramylodon harlani . These ossicles across the shoulders, neck and back must have functioned like a coat of armor, adding an extra layer of protection to the thick skin and coarse hair covering the sloth's body. 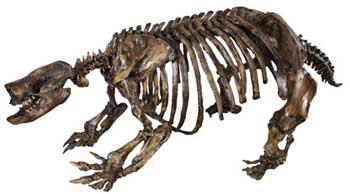 Remains of ground sloths are often found in caves or sinkholes. Conditions in caves are such that many tissues that would not normally be preserved, such as skin, nails, and other dried soft tissues, are naturally mummified and preserved.

Within caves, complete sloth skeletons with hair, skin and tendons still attached to the bones have been found. Fossilized dung has also been excavated from many caves, including that of both Nothrotheriops shastensis and N. texanus , which allows scientists to gain data about the food plants of these extinct animals.

Why did these animals use caves? Did the caves provide shelter at night, or during the extreme heat of the day? It is possible that the sloths may have spent the day in caves and gone out to feed at night. Perhaps they used caves to secure a more stable environment in terms of humidity, as well as temperature.

Some scientists have proposed that the caves were used as nurseries, since fossils from juvenile sloths have been found there. Yet another theory suggests that sloths used caves as a source for special minerals in their diets.

Large hyoid bones in some sloths' throats suggest that some may have had well-developed, prehensile tongues similar to that of a giraffe, that aided in feeding.

Modern sloths live in the forests of South America. Although they are much smaller than the extinct species, they retain some similarities. For example, they also lack front teeth and have long claws, which they use to hang upside down from tree branches for hours at a time. They are nocturnal animals, have a very low rate of metabolism, and move around very little.

Further Research
Why did the ground sloths become extinct at the end of the Pleistocene along with so many other big mammals? Some paleontologists say that climate changes altered sloths' favored plant communities. Other researchers credit human predation and habitat disruption for the extinction of the sloths. Even some "hyperdisease" has been suggested to explain their demise. Much more research is needed to find the answers.

Of Historical Interest
The first report of a ground sloth from North America ( Megalonyx jeffersonii ) came from President Thomas Jefferson. The fossils were found in 1799 in a cave in West Virginia.