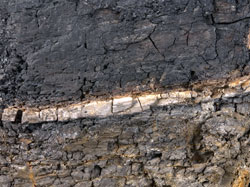 In Our Region
New research has revealed marine rocks from Baja California dated at 65 mya.

Description
San Diego Natural History Museum paleontologists traveled to Wyoming to bring back a piece of this stratified rock. It contains a thin gray layer of claystone rich in the element iridium. Iridium is rare on Earth, but commonly found in asteroids.

Layers of sedimentary rocks are like pages in a book of history to geologists and paleontologists, and the particular pages we "read" in this rock reveal a fascinating chapter telling of global ecosystem disruption.

No fossil remains of dinosaurs, mosasaurs, pterosaurs—nor fossils of almost any of the other large vertebrates living on earth about 65 mya—have been found in the rock layers occurring after this particular zone. These extinctions affected organisms of all the world's major continents and oceans. Because of this abrupt ending, scientists hypothesize that some global event occurred, resulting in the die-off of multiple species. Also ending abruptly are many species of terrestrial plants.

This demarcation signals the end of the Cretaceous Period and the beginning of Tertiary Period. Geologists have termed this distinctive point in geologic time the "K-T boundary" (K for Cretaceous and T for Tertiary.)

Despite the extinction of the large vertebrates and many plants, many other species lived on. Birds, mammals, lizards, crocodiles, amphibians, insects, some land plants and many marine species of fish, corals, and invertebrates survived the event and went on to thrive and diversify.

Although there are still many mysteries to be solved in regard to the K-T extinction event, scientists have made a number of important discoveries. We know that a huge asteroid, estimated to be about 6 miles (9.7 km) wide, impacted the earth precisely during this time period.

After studies of the worldwide iridium layer suggested its extraterrestrial origins, scientists eventually found the impact site. A crater near the coast of Mexico's Yucatan Peninsula formed when a six-mile wide asteroid crashed into the Earth.

The huge impact from an extraterrestrial body of this magnitude seems to have totally disrupted the ecosystems in place at the time. The most severely affected region appears to have been North America. Volcanoes, tsunamis, wildly fluctuating temperatures, and acid rain are just some of the destructive forces that may have come into play after the initial impact.

The rocks found at the K-T boundary, whether they are found in Europe, Canada or the United States, all show a very high level of the element iridium. This iridium layer has been located in over 100 different spots on Earth, both on land and under the ocean. Scientists theorize that this rare element was scattered all over the globe in a vast cloud of debris that was the result of the asteroid impact.

How did animals such as lizards, small mammals and insects survive? We hypothesize that because they were small and able to burrow or hibernate, they may have been able to find seeds, nuts or detritus to live on, despite the fact that the larger food chain must have been destroyed. Certain ocean-dwelling organisms may have been able to survive in deep water.

As to plants, those on land suffered a severe crisis which may have been caused by lack of sunlight due to the debris cloud, as well as global temperature shifts. On the other hand, many fern spores are found in the layers after the K-T boundary, which suggests that ferns were very successful in rushing in to fill the vacuum left after many other land plants died off.

A similar phenomenon occurred in 1883 after the eruption of the volcano at Krakatoa. Wind-borne fern spores quickly settled on the volcanic debris and recolonized the area, but were replaced later by flowering plant species.

Further Investigation
How did birds survive? How did turtles and crocodiles survive? Why did certain marine organisms die off and others survive? There are many more details needed to determine what happened 65 mya, and how life on Earth changed.