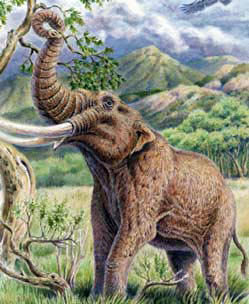 The American Mastodon became extinct by 13,000 years ago. The mastodon family diverged from other elephant-like relatives in Miocene times, between 24 and 5 mya.

Place
The American Mastodon was wide-spread across all of North America from Alaska to central Mexico. Other mastodon species were widely distributed throughout the world, and mastodon fossil remains are locally common and well-preserved in Pliocene and Pleistocene age deposits. Complete or near complete skeletons have been recovered, some even with preserved hair.

In Our Region
Mastodon fossils have been found by our paleontology staff in National City and Oceanside, California. Mastodon remains have also been recovered at the Rancho La Brea tar pits and at sites near Temecula and Hemet. 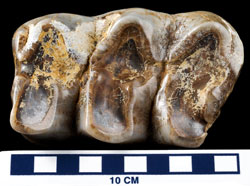 Description
American mastodons are sometimes confused with their relatives- elephants and mammoths. All three, placed within the order Proboscidea, are large, heavy mammals with distinctive flexible trunks and tusks.

Mastodons were smaller than mammoths. Similar in size to modern-day elephants, with a height of 7 feet (2.1 meters) for females or 10 feet (3.1 meters) for males, adult mastodons weighed as much as 6 tons (5443 kg).

American mastodons had low-domed heads, unlike the higher-domed heads found in mammoths and modern-day Indian elephants. The tusks were less curved than those of mammoths but larger and longer than elephant tusks. Young male mastodons often displayed a short pair of secondary tusks in the lower jaw that were lost as they matured.

However, the most distinctive feature differentiating mastodons from mammoths is their cheek teeth. Unlike modern elephants and extinct mammoths, the mastodon had molars that featured distinctive, cone-like cusps. Mammoths had flat, ridged molars that look like washboards, totally different in appearance from mastodon teeth. These unusual cusped teeth give the mastodon its name, derived from the Greek ("mastos" for breast and odon(t) for tooth.)

As modern relatives, today only two genera of elephants exist: Loxodonta , the African elephant, and Elephas , the Asian elephant.

Within the proboscidean order, where there were once 7 genera of mastodons and mammoths, only these remaining 2 genera of elephants survive, and these also display diminishing populations, due to many factors. This is a disturbing trend over time, casting a shadow over the future.

The bottom specimen is from the Middle Pleistocene Bay Point Formation in Point Loma and is approximately 220,000 years old. The fossil measures approximately 15.5 inches (39 cm.)

An Inside Look
In Oceanside, the paleontology crew from San Diego Natural History Museum spent two weeks excavating fossil remains from sedimentary rocks of a large Pleistocene river and oxbow lake. One of the first exciting things to be uncovered were the tracks left in mud by either mastodons or mammoths as they made their ponderous way along the edge of the river. With such a massive body, these animals left deep prints in the mud.

Footprint trackways like this are an example of a trace fossil. Trace fossils, as opposed to actual fossils of mineralized bone or shell, include such things as impressions made by skin or armor, footprints, burrows, and nests with eggs. Trace fossils such as trackways are the closest thing we have to a record of how extinct animals moved.

How can footprints last for millions of years? The substrate may have been muddy and wet when the animal walked over it, becoming dry later as the sun dries it out. Then preservation as fossil trackways might occur if there was rapid infilling of sediment over the prints.

Ecology
Mastodons were herbivores . Unlike mammoths, whose ridged molars were used for grazing on grasses, mastodons' teeth were used for clipping and crushing twigs, leaves and other parts of shrubs and trees. Most of the plants they ate were ones that grew near swamps and wet areas in woodlands.

What were those large tusks used for? Scientists believe that the tusks helped in feeding, such as when the animals stripped tree bark off trees, as well as in achieving dominance over other animals during competition for food.

Scientists believe that sexual dimorphism, as seen in these animals, occurred as a result of male competition for females. The male's larger size and larger tusks helped them compete more aggressively for females. Male mastodons also took longer to become sexually mature than females.

Because mammoths are more closely related to elephants, we assume that mammoth behavior and lifestyle might have been similar to that of present-day elephants. The same may be true to some extent for mastodons. Studies which have revealed a long growth period to reach maturity in these animals suggest that mastodons would have required the extensive parental care that is provided in modern elephant herds.

Elephants are very social animals. Although we obviously don't know about mastodon behavior, we can make educated guesses about their behavior, based on similarities between elephant and mastodon anatomy, stature, growth, and sexual dimorphism.

Where mastodons were most numerous, vegetation consisted mainly of coniferous forest with bogs, ponds and marshes. Their feeding habits could have been very destructive. We can easily imagine such large animals toppling over trees and trampling and killing plants, which may have required them to keep moving on. It is also possible that they moved to areas where there were salt licks or other minerals they needed.

Human predation may have hastened the extinction of mastodons, but this remains open to discussion. Climate change has also been suggested as a factor in their extinction. 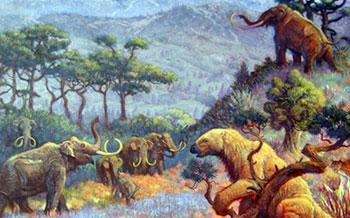 Of Historical Interest
The first European reports of mastodon fossils occurred following the discovery in 1705 of a tooth and other fragments from the Hudson River Valley. An account of the discovery by the famous Puritan clergyman, Cotton Mather, attributed the fossils to a race of giants that had been destroyed in the Flood described in the Bible.

Then in 1808, President Thomas Jefferson paid to have mastodon fossils from the Big Bone Lick site near the Ohio River shipped to the White House. Jefferson was fascinated with the fossils and spread them out for study in what would later be designated as the East Room. Part of these mastodon fossils eventually ended up in the collection of the Academy of Natural Sciences in Philadelphia.

Further Investigation
Some day scientists may be able to determine more about the role humans played in the demise of the mastodons, if any.