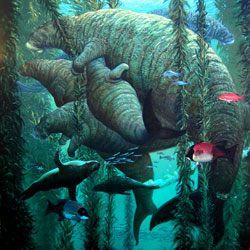 Place
Hydrodamalis cuestae remains have been found in California, Baja California, and Japan. During the Pleistocene, Hydrodamalis occurred around the entire rim of the north Pacific. Today the dugong is the only surviving member of the whole Dugongidae family.

The earliest records revealing the presence of sirenians in the northern Pacific are from California and Baja California. It is believed that the existence of a Central American seaway during the Miocene provided a means for species which had previously occurred in the tropical waters of the Caribbean to eventually make their way to the Pacific.

An Inside Look In May 2000, Pat Sena, a San Diego Natural History Museum paleontologist, discovered fossils including a skull of H. cuestae while working in the field at the construction site of the Otay Ranch planned community in Chula Vista. Graders were constructing the Village 1 West phase of the development when the fossil was uncovered in Pliocene marine sandstones of the San Diego Formation. This represents the most complete and best preserved specimen yet found. Recovery of the skull took four hours, but did not interfere with the construction schedule. 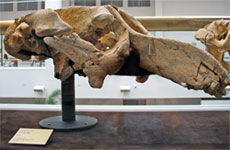 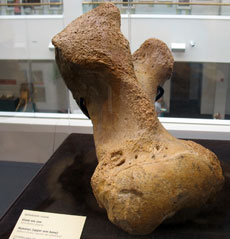 For more about the Otay Ranch discovery, see the article
Skull of Giant Pliocene Sea Cow Discovered at Otay Ranch

In Our Region
Chula Vista and San Diego, California

Description
Hydrodamalis cuestae was a huge animal, and could have reached 22,046 pounds (10 metric tons) in weight. One specimen found in San Diego County probably represents an individual over 30 feet (9 meters) long, the largest sirenian in the world. The bulbous body of H. cuestae, covered with thick blubber, had a whale-like tail, and short forelimbs lacking complete finger bones. The bones were extremely dense, which might have helped to compensate for the animal's buoyancy.

Ecology
The only living relatives of this mammalian species include dugongs and manatees, which are both found in warm, shallow waters in sheltered areas such as bays and rivers, where they feed on seaweeds and sea grasses. Sirenians spend their entire life in the water and are the only marine mammals to feed exclusively on plants.

Hydrodamalis cuestae is particularly interesting to study, because we have an example of another species in the same genus that only very recently became extinct, for comparison. Hydrodamalis gigas, the Steller's Sea Cow, is also now extinct, but was observed in 1741 and 1742 by the biologist Georg Wilhelm Steller, the only scientist to see it before it was hunted to extinction around 1768. The ship's naturalist and physician on board during Vitus Bering's second expedition to North America, Steller observed the animal while he was shipwrecked on Bering Island and described it in great detail.

Although Steller was unaware of it at the time, the presence of Hydrodamalis gigas off Bering Island was only as an evolutionary relict, a small population confined to a very restricted area of cold waters near the Kamchatkan peninsula.

This area was probably not the optimal habitat for the species. There is evidence that the sea cows were often injured or suffocated by ice floes and were not able to find enough food to stay healthy. This cold-water adapted species had in fact evolved from sirenian ancestors that had formerly occupied tropical warm waters along the California coast with its warm, shallow bays some 35 million years ago.

During the Miocene when Hydrodamalis cuestae was living off California, scientists believe that the profile of our coast was very different from today. The coast of California was fragmented into many shallow bays, estuaries and inland seas, which provided ideal habitat for the sirenians, unlike today's rocky exposed shore line.

Sirenian evolution over a period of approximately four million years allowed for their gradual adaptation to colder waters and a more northward range extension, accompanied by an increase in body size. Food items, too, probably changed from marine plants growing in sheltered waters, such as seagrasses, to kelps and other cold-tolerant algae growing in colder, less protected waters.

Because we have historical information about H. gigas, we know a good bit about the ecology of this animal. Although we cannot be sure, we can surmise that H. cuestae may have had similar habits. Hydrodamalis gigas lived on the surface, in shallow bays, constantly feeding on marine plants in the kelp beds. It was a slow-moving, massive animal, completely unafraid of humans.

Steller observed that the sea cows fed on algae near or on the surface, and may not in fact have been able to submerge the entire body, although they were apparently able to keep their heads under water for as long as five minutes.

Using their claw-like short front appendages, they were able to dig and tear algae off rocks, and to help propel themselves along in shallow water, in a motion that combined elements of swimming and walking.

Steller's sea cows were gregarious, and young ones were kept in the middle of the herd for protection. Babies were born year-round but most often in the fall. Normally one calf was produced, and the mother cow had only two mammae or milk glands.

These animals were extremely vulnerable to hunters, and their extinction was due to human predation. They were very large and slow-moving, not at all aggressive, had no hiding places, were found close to land, and were easy to kill with a simple spear that was stout enough to penetrate the hide.

People could often just wade out to them and kill them at will. The meat and fat made for good eating, and the unfortunate result was that the population of H. gigas was decimated in a period of only 27 years, with the slaughter of over 2000 animals.

Further Investigation
More research is needed to determine why sea cows migrated northward to live in an environment that did not allow them to thrive.