In Our Region
Fossils of  Lambeosaurus  have been found in Baja California, in Cretaceous rocks near El Rosario.

Description
Lambeosaurus  was a  hadrosaur  or duck-billed dinosaur, so-called because of their flattened duck-like snouts with no front teeth.  Lambeosaurus  had a high, domed head with a large hatchet-shaped crest containing hollow nasal air passages. 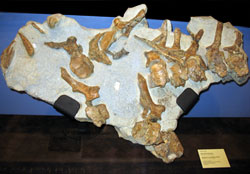 These dinosaurs had three toes somewhat similar to a bird, and longer, stronger back legs with shorter forelimbs. Able to walk or run on their back limbs, they probably used all four limbs when searching for food or grazing. Their long thick tail was used for balance when running. 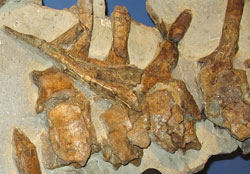 Their teeth were small and leaf-shaped, but there were many of them. They were able to continually replace teeth that may have gotten damaged while chewing on tough plant parts. Scientists believe that they could have had as many as 1600 teeth wedged into very tight dental batteries.

Fossilized skin prints from hadrosaurs have been found. The skin was composed of a pavement of interlocking thin tubercles, apparently too thin to offer any protection against predators.

Ecology
The dominant terrestrial herbivore of the Late Cretaceous, hadrosaurs did not have any armor to defend themselves, and their teeth were only adapted for eating plants, so they must have relied on a good sense of sight and smell to evade predators. They were also probably fast runners. They may have also spent time in coastal lagoons or other aquatic areas, avoiding predators.

The skull crest was highly variable in shape. Some scientists view the variability of the crest as a function of sexual dimorphism.

The function of the crest has been debated. The hollow bony crest may have been used as part of a courtship display or to recognize their own species, to make a resonating chamber for deep sounds used to communicate to other animals, or possibly to enhance the sense of smell.

Hadrosaurs, along with ankylosaurs and other plant eating ornithiscian dinosaurs, had an adaptation that helped them become so successful. They had muscular cheeks, which allowed them to better chew plants for food. 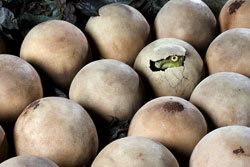 More information is known about hadrosaur life than for any other dinosaurs. By examining such diverse evidence as skin impressions, eggs and nesting sites, trackways, and skeletal morphologies scientists can gather a much fuller picture of their ecology.

There is ample evidence that some hadrosaurs were social animals; they may have traveled in large herds. Fossil evidence has confirmed nesting behavior, with adults, eggs, multiple large nests, and hatchling remains all recovered in the same area. The young were probably being cared for, rather than simply hatching on their own. 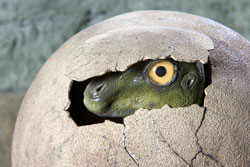 Earthen nests contained as many as 20 eggs per clutch, laid in a circular pattern. The eggs may have been covered with vegetation to keep them warm through the heat generated by decomposition, similar to a compost pile. Some species of living birds and crocodiles incubate their eggs in a similar fashion.

The same nests seem to have been used repeatedly during successive nesting seasons. Close examination of fossilized remains from the young showed that they were probably being fed plant materials by the adults while still in the nest.

Hatchlings lacked crests, but developed them as the skull grew until it reached its adult form. Their face was short at first, lengthening with age.

Further Research
What was the actual function of the crest? Scientists may be able to determine this more conclusively in the future.