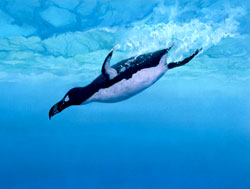 In Our Region:
Found in the San Diego Formation of southwestern San Diego County and northern Baja California

Description:
Pliocene fossil bird remains are particularly rich in the southern California area, with over 24 species being recovered from the San Diego Formation alone. The first published record of any fossil bird from California was in 1901 for the species designated as Mancalla californiensis.

The extinct flightless auks are represented by fossils of at least three species within the genus Mancalla in the San Diego Formation: Mancalla milleri, M. emlongi, and M. diegensis. These birds stood about a foot tall (30 centimeters.) The legs were short and slender as opposed to the chunky legs of penguins.

Although these birds could not fly, they were adept as wing-propelled swimmers, with very flattened, paddle-like wing bones that helped push them through the water. Like other members of the family Alcidae, they would have “flown” underwater with wings outspread. Paleontologists also believe that the rigidity of the vertebrae may have helped them adapt to swimming. Birds in this genus were the most common bird of the San Diego Formation, with thousands of fossils being recovered.

Ecology:
Modern alcids are not flightless, but are diving birds that also use their powerful wings to swim. They are found in the Northern Hemisphere, and include the murres, Atlantic puffins, razorbills, and guillemots.

It is likely that, here in the Northern Hemisphere, the flightless auks occupied a similar ecological niche that the penguins fill in the Southern Hemisphere. They may have lived in large groups, much as modern penguins do today. Both alcids and penguins are extremely proficient divers; some alcids have been captured at depths of 180 meters (590 feet!)

Scientists postulate that flightless birds most likely developed in conditions where there was an abundant and regular supply of food, and a lack of predators, or at least where predators were rarely encountered.

These seemingly ideal conditions may have been present in San Diego’s Pliocene embayment. There was apparently an abundance of fish for these birds to feed on, and there may have been islets and islands off shore that allowed them to avoid the majority of large mammalian predators. These islands could have served as rookeries for young birds, also.

Why would it be favorable for survival for a bird to lose the ability to fly? Large flight wing muscles and bones require much energy to maintain. In a safe supportive environment, Mancalla and many other birds conserved energy by becoming flightless over time.

The physical mechanism for this transformation to flightlessness involves the simple alteration of a few genes that control development, so that the adult bird has many features of the flightless young chick. Feathers became more open and less tightly constructed and the bird’s overall size tended to become larger, with a bigger pelvic region and hind legs. In many ways the adult flightless Mancalla would have looked like a large, overgrown chick.

Another member of the Alcidae that has become extinct did so only during very recent times. The Great Auk, or Pinguinis impennis, a large black and white flightless seabird found in the north Atlantic, was often seen by fishermen offshore. Standing as tall as two feet (60 centimeters), these birds were slow and awkward on land.

During its nesting period of a few weeks each summer the birds waddled onshore to lay their eggs in huge colonies on the islands off Greenland, Iceland, Labrador, Great Britain, and Europe. Laying only a single egg and having little or no defense against human predation, the birds were slaughtered by the thousands by hunters and their eggs collected as well, with the sad result that they became extinct by 1844.

Part of their vulnerability could be attributed to the fact that as large, plump birds they, and their large eggs, made more tempting targets for hunters than other smaller birds. Like modern penguins, their colonial nesting habits also put them at risk.