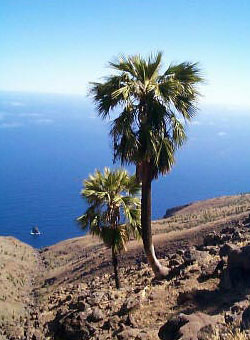 In Our Region
Carlsbad, San Diego

Description
Leaves of an extinct fan palm found in Carlsbad, California are similar to those of  Sabal  palms today, with numerous rays arranged in a fan shape arising from a stout, woody petiole. Occasionally complete fossils have been found with the fanlike leaves and sturdy petiole intact.

Description
A small fan palm growing to 10 m (30 feet) high with a highly fissured trunk 40 cm (1-1/2 feet) in diameter. The palm can be distinguished from other Brahea species because it does not have a skirt of persistent dead leaves, or leaf petioles. The large fan-shaped leaves are a shiny green and usually have an indentation along the midrib. This palm flowers from February to March with black fruits (25 to 35 mm across) forming in summer. Other members of this genus that are native to Baja California region are Brahea armata (Blue Fan Palm), and Brahea brandegeei (Palma Palmia or Palma de Taco).

Range and Habitat
The Guadalupe palm is endemic to Guadalupe Island where it occurs primarily on the north end of the island on steep rocky slopes. Guadalupe Island is located in the Pacific Ocean off of central Baja California. The Guadalupe Palm is a very popular ornamental palm in southern California and many of them are planted along Village Place north of the Natural History Museum in San Diego's Balboa Park. See the museum's web pages on Guadalupe Expedition 2000 for more information about the island.

Natural History
The palms' native habitat on Guadalupe Island has been severely impacted by feral goats that have inhabited the island for decades. Few, if any, of the seedlings survive because they are eaten by the goats. Protection of the native habitat and exclusion of the goats might allow the palms to flourish in large numbers on the island once more.

Ecology
Members of this family were a common shoreline plant in our area during the Eocene. 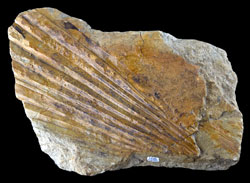 The presence of palms in the fossil record is testimony to the former existence of a warm climate, since palms do not tolerate freezing temperatures. Typical examples of a tropical or semi-tropical flora, fan palms have large, thick leaves and grow near ponds, swamps, or lagoons, or in areas of moderate to high rainfall where there is high relative humidity.

The fossil record of plants in the palm family is very rich and widespread, starting as early as the  mid-Cretaceous . Fossil material for palms includes leaves, stems, rhizomes, roots, fruits, seeds and more rarely, flowers or pollen. Some of the earliest records for fossil palm leaves are those of Sabalites . Fruits and seeds from  Sabalites  have also been discovered.

The related living genus of palms called  Sabal  contains plants commonly known as palmetto palms or hat palms. This genus consists of 16 species that are found in the coastal areas of the southeastern U.S. and west to Mexico, Bermuda, the Caribbean, Panama, and northern South America. These palms may be found in shady swampy areas, or along the sea coast or tidal flats.

There is evidence that living tapirs are associated with the distribution of palms. After digesting the fruits, tapirs defecate as they move from place to place, and palm seedlings germinate from the tapir dung. It is unknown whether extinct tapirs fulfilled a similar role in the spread of palms such as  Sabalites . However, fossil remains of an Eocene tapir have been found locally in strata also containing fossil palm fronds.