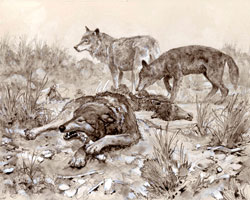 Place
Dire Wolves' geographic range spanned from coast to coast in North America and from Canada to South America.

In Our Region
A partial skeleton of Canis dirus has been found by the San Diego Natural History Museum paleontology staff in National City. Dire wolves are very common at Rancho La Brea.

Description
Canis dirus , the Dire Wolf, looked much like our modern day wolves, only heavier and with more massive jaws and teeth. It had relatively shorter legs, as well as larger shoulder blades and pelvic bones. The Timber Wolf or Gray Wolf ( Canis lupus ) of today is leaner, usually weighing between 66 and 145 pounds (29.4 -65.8 kg), whereas Dire Wolves weighed between 125 and 175 pounds (56.7 - 79.4kg).

An Inside Look
Dire Wolf fossils found by the paleontologists of the San Diego Natural History Museum were recovered during roadway improvements to State Route 54 in National City, California. These fossils consist of a nearly complete skeleton of an old individual with worn teeth and a broken molar. Nearby were fossil remains of a deer. 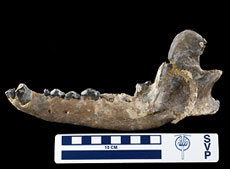 Ecology
The greatest number of fossils have been found in the Rancho La Brea tar pits of California, where remains from over 3,600 Dire Wolf individuals have been discovered, making this species more common than any other mammal there.

Why did so many wolves die there? What may have happened is that prey animals ventured into the tar seeps, became entangled and started thrashing about because they were unable to extricate themselves. This in turn lured the wolves to make the same mistake, in pursuit of easy prey. Dire wolves are believed to have been the major predator species of the area around the Los Angeles Basin during the end of the Pleistocene.

Scientists make inferences about the diet of Dire Wolves based on fossil remains. They surmise that C. dirus may have been carrion feeders when they were unable to capture live prey. Their jaw structure and teeth were very massive and capable of crushing heavy bones. Many fossils show wear and tear on the teeth as well as fractures on other bones.

Along with mammoths and mastodons, the Dire Wolf died off between 10-16,000 years ago.

Why did these animals become extinct? Many hypotheses exist. The Dire Wolf skeleton is more stout than that of the Gray Wolf, suggesting an adaptation for power rather than speed. Most of its prey species were rather sedentary herbivorous animals that were not able to run very fast to escape predation. Scientists suspect that once those relatively slow-moving prey animals became extinct, the Dire Wolf may not have been able to hunt and capture swifter prey in order to survive.

The evolution of wolves is of special interest to us, because of their importance as the direct ancestor to the domesticated dog. We can trace many connections between wolves and wolf ancestors and dogs today. For example, the so-called "dew claw" of the dog first appeared in the Miocene; one wolf ancestor, Tomarctus, had a vestigial l fifth claw on the hind legs.

Domesticated dogs had probably already begun living with humans around 14,000 years ago as revealed by scientific research at archaeological sites in Peru, Bolivia, and Mexico. This is also about the time that the Dire Wolves died out.

Further Investigation
Human interaction with Dire Wolves remains unclear. Is the appearance of humans in North America in conjunction with the extinction of Dire Wolves a coincidence, or does it reflect the negative effect of hunting? Some scientists also have suggested that the wolves competed unsuccessfully with humans for prey species. More information is needed to determine the answer to this complex question.