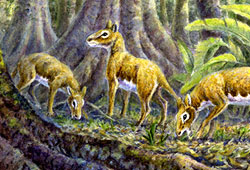 Place
In Our Region:
Numerous skulls, jaws, and some partial skeletons have been collected from several localities in San Diego County. This species occurs in strata of late Uintan age (about 42-43 million years old) and its fossil remains have been found in Spring Valley, La Mesa, Scripps Ranch, Carlsbad, and Oceanside, in rock units known as the Mission Valley Formation and Santiago Formation.

Description:
Protoreodon walshi  is an extinct species of artiodactyl, distantly related to modern cows, deer, pigs, and camels. It is one of the oldest members of the Artiodactyla to possess crescent-shaped molar teeth, which are characteristic of most members of the order. This exclusively North American group was very diverse during Eocene and  Oligocene time, but finally became extinct at the end of the Miocene, about 5 million years ago.

Protoreodon walshi , one of the oldest and most primitive known species of  Protoreodon , was as large as a medium-sized dog.  Protoreodon  was the most common artiodactyl living in both San Diego and the rest of western North America during the middle part of the Eocene Epoch.

Ecology:
This animal probably made its living by browsing upon the Eocene shrubbery. The discovery of abundant fossil remains of this species suggests that  P. walshi  probably was gregarious and may have lived in herds. It was likely preyed upon by some of the large carnivores in the San Diego Eocene fauna, such as Tapocyon.

Of Historical Interest:
This species of  Protoreodon  was known from several fragmentary fossils from San Diego for many years, but remained unnamed, even though it was widely understood by paleontologists to be a new species. After numerous complete skulls and jaws were collected in Oceanside during the widening of State Route 78 in 1991, Dr. Jessica Theodor formally named the new species after Steve Walsh, a former employee in our own Paleontology Department, now deceased.