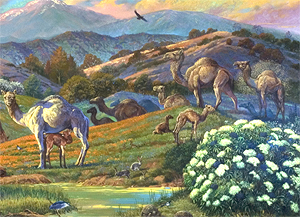 Description:
This extinct camel looked much like the modern Bactrian and dromedary camel of Asia and Africa. Camelops stood about 7 feet (2.2 meters) tall at the shoulder. As members of the camelid family, these animals had very unusual feet, with four toes reduced to only two elongated digits. Splaying of the toes and a broad foot pad were probably adaptations that helped when walking on rough terrain or soft sand. Their leg bones were also very elongated and adapted for walking long distances when searching for food and water.

The shoulder joint of the Western Camel was much higher than the hip joint, with a rather steep slope in the hindquarters down to the tail, similar to what we see in modern camels. From studying the tall neural spines on its back vertebrae, scientists believe that the single hump must have looked similar to that of a dromedary, although it was placed a bit farther forward.

Despite the fact that we presently associate camels with the deserts of Asia and Africa, the camelid family originated in North America during the middle Eocene, at least 44 mya. By the Oligocene, 28 mya, a small delicate camel, Miotylopus, occupied open habitats in southern California, hunted by nimravid cats and early canids. By 3 mya, an extraordinary tall camel, Titanotylopus, lived in coastal areas of southern California and probably fed on coarse shrubs.

During the Pleistocene, great numbers of Camelops probably moved in herds across North America, but they became extinct on this continent about 11,000 years ago. They are survived by the llamas, vicunas, alpacas, and guanacos in South America, and the modern-day camels of Africa and Asia.

Ecology:
Studies on the Rancho la Brea Camelops hesternus fossils reveal that rather than being limited to grazing, this species likely ate mixed species of plants, including coarse shrubs growing in coastal southern California. Scientists believe that Camelops was actually more closely related to llamas than to living camels.

Camelops probably could travel long distances, similar to the living camel. We do not know if it had the ability to exist for long periods without water that modern-day camels display; this may have been an adaptation that occurred much later, after camelids migrated to Asia and Africa.

Camelids developed an unusual style of walking called “pacing,” which means that the front and back legs on each side of the body move forward together. We can see fossil evidence that this pacing movement occurred with the earliest camels, since there are fossil trackways that document it.

Further Research:
Why did the camelid family become extinct in North America? In southern California alone, there were at various times at least eight different forms of camels, yet by 11,000 years ago, the entire family was extinct on this continent.