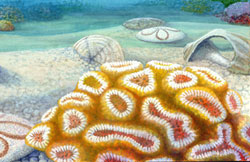 Description:
These corals belong to the stony corals, the group that is responsible today for the building of the major reefs throughout the world’s tropical oceans. These corals are colonial marine organisms, with the soft body tissues of the animal encased in a skeleton of calcium carbonate, which is left when the animal dies. Brain corals are so-called because the skeletal pattern is reminiscent of the wrinkles in a human brain.

Usually, these coral fossil remains are discovered as fragmentary coral heads, but occasionally small complete patches of fossil reef are found, still attached to the ancient bedrock of the sea floor.

During the late Miocene and early Pliocene, the eastern part of the Pacific Ocean, the Gulf of Mexico and the Caribbean Sea were all linked together to form one continuous marine environment, since the land barrier of the Isthmus of Panama did not yet exist. This means that marine invertebrates such as corals, which have larval forms that occur in the  plankton  and move with ocean currents, could easily spread from off the coast of California to the Caribbean Sea.