Founded in 1874, the San Diego Society of Natural History is the oldest scientific institution in southern California, and the third oldest west of the Mississippi. In its initial years, the Society was the region's primary source of scientific culture, serving a small but growing community eager for information about its natural resources. Early society members established a weather station, petitioned to create Torrey Pines State Reserve, and garnered support for the new San Diego Zoological Society.

In June 1912, the Society met for the first time in its new quarters in the Hotel Cecil, recently built on Sixth Street in San Diego. Later that same month exhibits created by Frank and Kate Stephens were installed in a single room and adjoining alcove, and were open to the public several afternoons each week. The Society had opened its first museum.

In 1917, the Society purchased a vacant Balboa Park building from the 1915 Panama-California Exposition. Here the Society moved its growing collections and library to create the San Diego Natural History Museum. The Board defined its commitment "to educate and help people know and love nature" and began a variety of educational programs, many of them using specimens from museum collections in city and county schools.

The Museum occupied three different buildings in Balboa Park before celebrating its 50th anniversary. Community leaders recognized the need for a permanent museum of adequate size. San Diego's leading architect, William Templeton Johnson (1877-1957) was commissioned by the Society of Natural History to design its new museum building on Balboa Park's East Prado. Johnson had earned his reputation with his design of the Fine Arts Gallery (now the Museum of Art) and the downtown San Diego Trust & Savings Bank, among other buildings.

The construction of the new headquarters was made possible through a grant of $125,000 from Ellen Browning Scripps, and by public subscription. However, the full amount needed for the building could not be raised in the Depression years. Only the first unit of the building, at the south end of the lot, and one wing extending toward the north, could be built. The north and east exterior facades were left plain as temporary walls slated for future expansion, and remained so for sixty years. 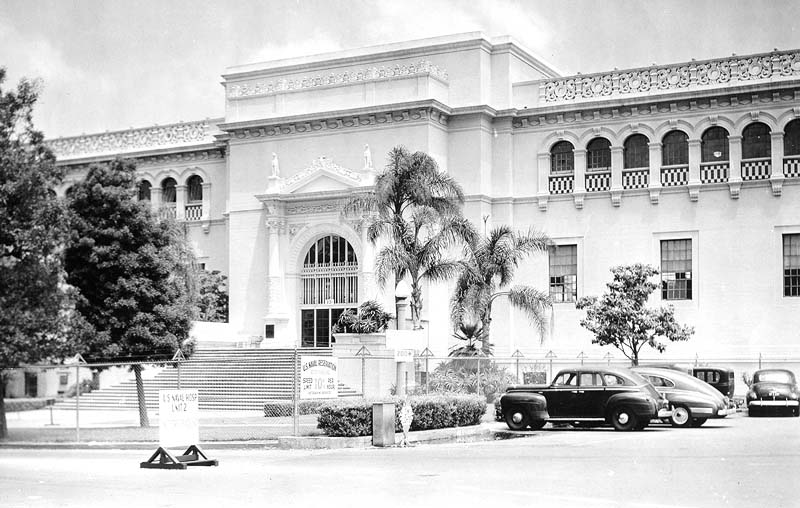 The Society was notified on March 5, 1943, that the U. S. Navy wished to take over the Natural History Museum for hospital use at once.

The Natural History Museum became the infectious diseases ward. Some renovation took place in the facility, including the addition of an elevator designed to handle hospital gurneys and a nurses' station between floors. Both features remain in use today.

The main library and its librarian were moved to San Diego State College; the rest of the treasured and fragile exhibits were hastily packed, crated and moved into a total of 32 separate places. Exhibits too large to be moved were stuffed into the north wing on the main floor. A major renovation commenced once staff was allowed to reoccupy the building. Forced to look at all collections and exhibits in this rehabilitation process, the board adopted a firm policy to restrict collections to the southwestern United States and northern Mexico. The Museum continued its steady growth with post-war San Diego, despite periods of financial stress. Staff upheld professional practices regardless of limited resources, and the American Association of Museums accredited the Museum in 1974. 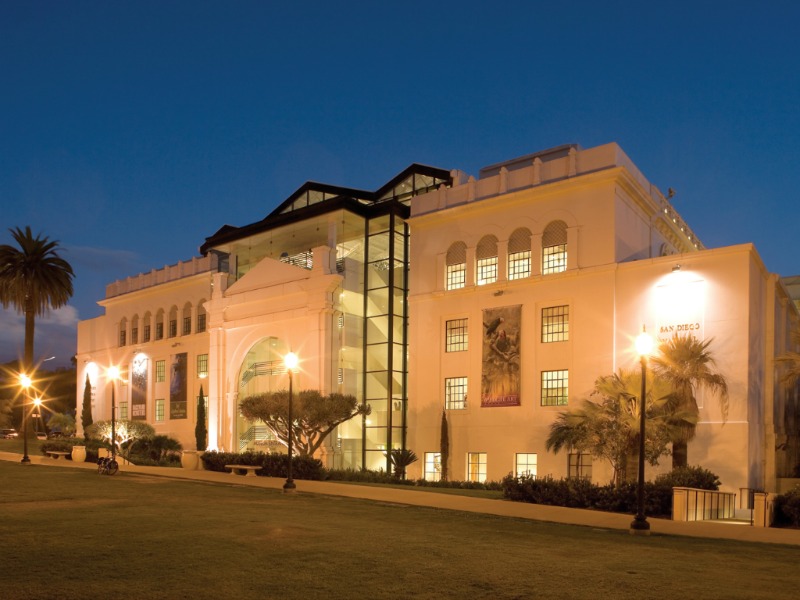 In 1992, through the leadership of then President and CEO Dr. Michael “Mick” Hager (1991-2016), the board adopted a ten-year strategic plan that concluded in June 2002 with accomplishment of three major initiatives: 1) establishment of the Biodiversity Research Center of the Californias to refocus research and collections on regional biology and geology; 2) creation of the Environmental Science Education Center as a comprehensive source for programs on-site, off-site, and in binational settings; and 3) completion of a $38 million capital campaign that more than doubled the facility's size with the opening of a 90,000 sq. ft. addition in April 2001.