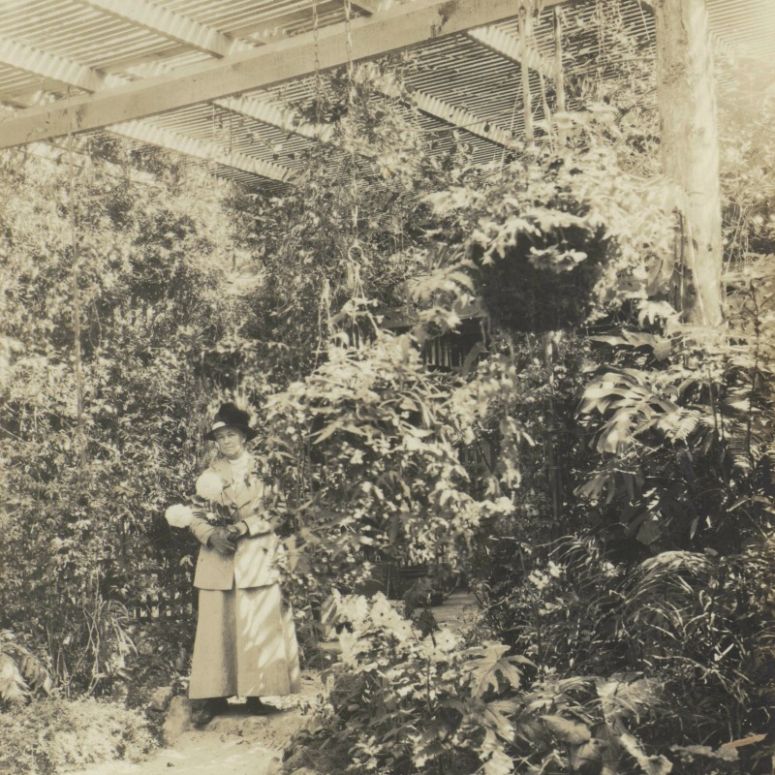 Kate Sessions, who had a strong interest in plants even as a child, is best known as the “Mother of Balboa Park” but it might be more accurate to designate her as the female “Johnny Appleseed” of San Diego. Her botanical legacy is abundant within the Park. She was instrumental in the planning and planting of Palm Canyon and the Aloe and Agave Garden. But the plants and trees she introduced to the area are now found all over San Diego and beyond. Although San Diego’s parks, streets, and gardens are now lush with many shrubs, trees, vines, and succulents from all over the world, at the time Kate moved here, much of San Diego remained very starkly bare—basically empty land. She was instrumental in procuring many new plants from growers worldwide and introducing them to the area. Blessed with a mild climate, San Diego proved to be a fertile growing area for many of these species.

Born in 1857 in Oakland, California, Kate moved south to San Diego in 1884. She started a plant nursery a year later and in 1892 contracted with the city to plant 100 trees a year for 10 years, in exchange for a nursery area in the northwest corner of what is now Balboa Park. A successful and tireless business owner, over her lifetime Kate operated nurseries in Coronado, Pacific Beach, Mission Hills, and other locations in greater San Diego. She is said to have introduced the jacaranda, poinsettia, orchid tree, bougainvillea, bird of paradise, and many other exotic plants now common in local gardens and streets. She also inspired local schoolchildren to help plant trees, but planting alone was not enough—the new young plants had to be carefully nurtured to survive.

It is true that local botanists and native plant specialists often point out that Kate Sessions introduced exotic species that, in some cases, have threatened to crowd out our native local plants. However, in her lifetime, there was not much known about introduced species out-competing the native flora. In addition, Kate Sessions brought several rare and endangered species to our area that have managed to survive, such as rare palms from Baja California. These palms she acquired by digging up a few plants herself on a trip to Cabo San Lucas in 1902. She was also responsible for the planting of the enormously tall Guadalupe cypress tree in Balboa Park near the Horseshoe Club. This very rare species is endemic to Guadalupe Island, Mexico and has been threatened in the past by the voracious browsing of feral goats on the island.

Kate Sessions died at age 82 in 1940. A sculpture of her stands today in Balboa Park near the Laurel Street Bridge. After admiring the incredible size of some of the Canary Island pines she planted as mere seedlings by the Marston House and some of her other horticultural contributions in Balboa Park, it is clear that her legacy remains and is thriving still today.

Posted by Director of the Research Library Margi Dykens.