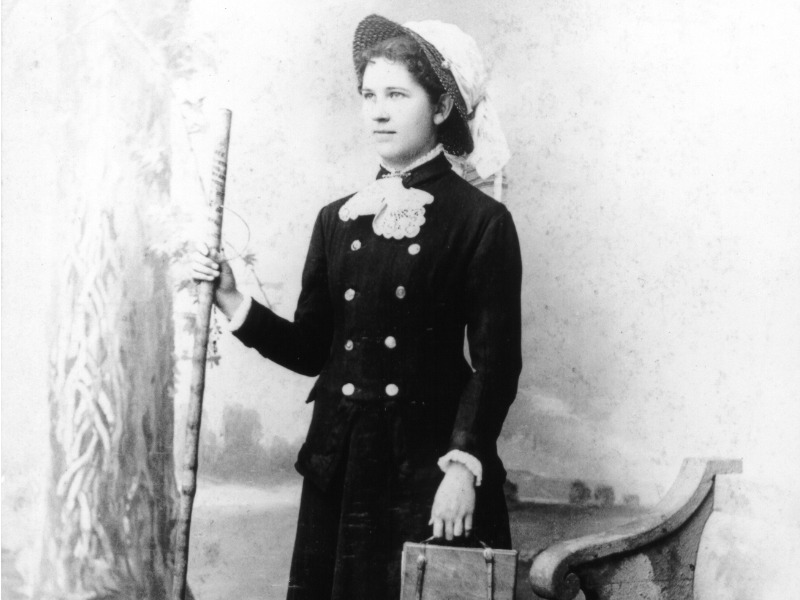 Rosa Smith Eigenmann was an American ichthyologist—someone who studies fish—and is believed to be the first female ichthyologist of any significance.

Born in Monmouth, Illinois, on October 7, 1858 as the last of nine children, she moved with her family to California, settling in San Diego in 1876 (two years after the formation of the San Diego Society of Natural History). Rosa became interested in local natural history and collected plant and animal specimens, particularly fish.

Early on, our organization’s founders made the decision to welcome women, at a time when females were normally not included in scientific endeavors. Rosa Smith became the first female member of the San Diego Society of Natural History, often speaking at meetings about her own research. She served as secretary and librarian of the Society in the 1890s, recording meeting minutes and specimen donations. She made sure the meeting minutes were published in the local newspaper, thus securing more publicity for the new Society.

During her research in San Diego, she discovered a new species of Blind Goby in the caves beneath Point Loma, Othonops eos, and published a paper describing it in 1881. As a single author, Rosa Smith published 12 scientific papers describing her research.

David Starr Jordan, well-known ichthyologist at the time, was impressed with Smith after hearing of her Blind Goby discovery and invited her to study with him at Indiana University in Bloomington. She studied at the university with Jordan for two years but never graduated because she had to return to San Diego due to an illness in her family. While at the university, she had met another student of Jordan’s, Carl Eigenmann, who was working on his Ph.D. They continued to correspond after her return to San Diego and married on August 20, 1887.

The Eigenmanns became a pair known for their scientific research, publishing as “Eigenmann and Eigenmann.” They worked on many joint projects at institutions across the country.

Initially they collaborated on a research project dealing with South American fishes in the Agassiz collection at Harvard in Cambridge. After returning to California in 1889, the Eigenmanns established a biological station in San Diego, continuing their fish studies of the region and holding appointments as curators at the California Academy of Sciences. The Eigenmanns returned to the University of Indiana, when Carl accepted an appointment in the Zoology Department; he later became Dean of the Graduate School there.

Together the Eigenmanns published some 25 papers, describing approximately 150 species of fish.

While married to Carl, Rosa gave birth to five children, one of whom was disabled and another child who later had to be institutionalized. While devoting the necessary time to raise her many children impacted Rosa’s ability to conduct scientific research, she continued to work as an editor of her husband's research papers.

The couple retired to Coronado, California in 1926, where they lived until Carl Eigenmann died in 1927, and Rosa died in 1947.