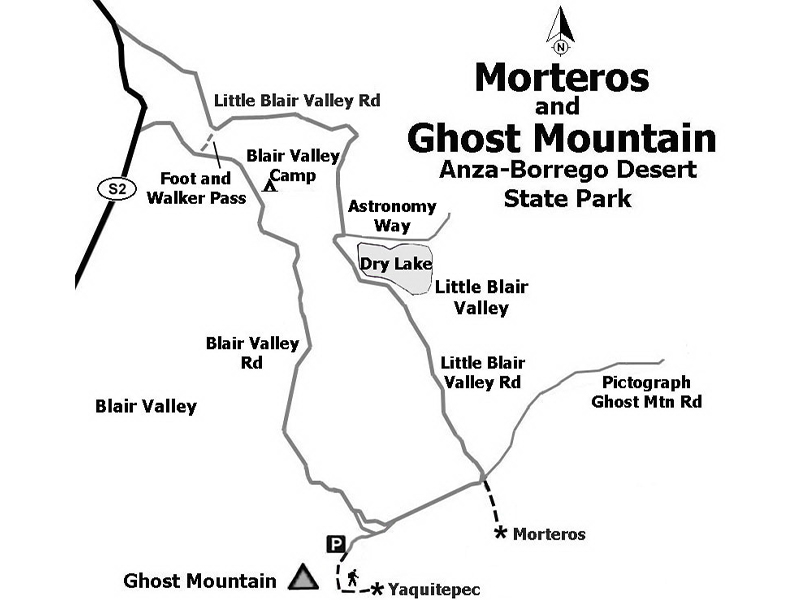 The Morteros Trail is part of the 4,757-acre Little Blair Valley Cultural Preserve that was created in December 2010 in Anza-Borrego Desert State Park. Morteros is the Spanish word for mortar holes, or grinding stones used to process seeds and plants. The area was a seasonal home for Kumeyaay ancestors who harvested the desert agave and juniper berries found in this area and processed the foods they gathered at this site.

At the trailhead, there is both an interpretive sign and copies of a trail map/brochure, entitled “The Ehmuu—Morteros Trail.” The wealth of cultural materials in this small area is stunning and is well interpreted. From the parking area, the trail heads to an area peppered with boulders where several grinding areas are found. Among the boulders you'll see both morteros (bedrock or deep mortar holes) caused by pounding seeds and wild foods with a large stone (pestle), as well as smooth grinding areas (slicks), made when pounded seeds were broken down into flour with a hand-held stone like a rolling pin. The highlight of the trail is 0.5 miles out where beautiful rock art is found. The sweeping lines of the black pictograph resemble stick figures.

We’ve rated the difficulty for this hike easy, with minimal elevation gain. Check to ensure the trail is open.
Usually okay for 2WD vehicles, however, check with the Anza-Borrego Visitor Center regarding road conditions.
There is a vault toilet at the entrance to Blair Valley.

More detailed information about the area can be found at Anza-Borrego Desert State Park.

In addition to the history of Kumeyaay people and ancestors, you’ll find that the area is rich with plant life. The hillsides are covered with the gray-green rosettes and tall flower stalks of the desert agave (Agave deserti var. deserti), called ‘emally by Kumeyaay. Along the trail are darkened areas in the sand indicating where the agave had been roasted.

Desert agave was a major staple for Kumeyaay ancestors. Every part of the plant was used for food, rope fiber, medicine, firewood, or tools and needles for fiber-making, art, and tattooing. Spring was the time to harvest the newly sprouting flower stalks of agaves. The agaves cooked for several days in heated, rock-lined pits before they were dug up and consumed or dried and stored for later consumption. Baked agave has been described as tasting like baked yams or pineapple. The Greek name agave means “noble” and refers to the size of the plant and its flower stalks.

Other common plants in this area include the higher elevation California junipers, jojoba, Mojave yucca, and ephedra or desert tea.