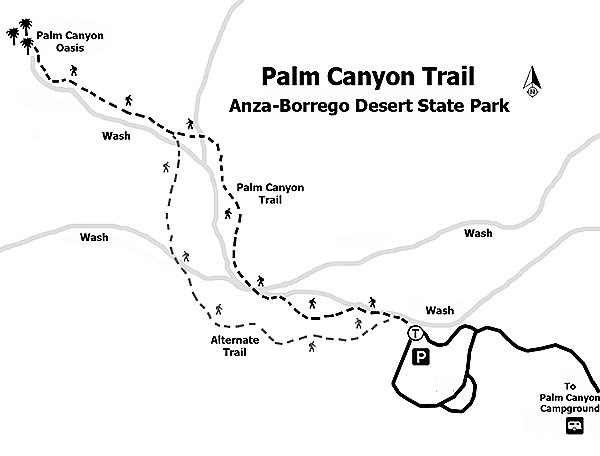 The Borrego Palm Canyon is the most popular hike in Anza-Borrego Desert State Park, and with excellent reason. Dramatic desert-varnished walls begin to close in as you hike up a large alluvial fan into the heart of the canyon where a clear bubbling stream flows through a cool, shady oasis of native California fan palms (Washingtonia filifera). This palm grove was initially recommended to be part of the proposed California State Park System in March 1928 and officially became “Borrego Palms Desert State Park” in November 1932—the first desert park in California. An added bonus on this hike may be a sighting of desert bighorn sheep (Ovis canadensis nelsoni)—the borregos of the canyon, which are frequently but not always easily seen from a distance, so be sure to bring your binoculars.

There are two trails leading up to the palm grove: the main trail and an alternate one. Both begin at the western-most end of the campground near a pond established for desert pupfish (Cyprinodon macularis). Most hikers take the main trail that goes up the canyon’s floodplain, which occasionally is disturbed by flash floods. A particularly destructive flood in September 2004 affected parts of the main trail, damaged the campground, and destroyed many of the palms at the first oasis. Both the palms and the campground have largely recovered since then and were little affected by more recent flash flooding. However, there are still visible signs along the trail that attest to the awesome power of water during a flash flood. Water and fire have a story here, though. In January 2020 a fire swept through the palm grove causing considerable damage. While the palms have already made a good recovery, as of this writing, the actual grove is closed to the public until further notice.

The “tourist” turnaround is at the main palm grove where there is plenty of water and shade. However, don’t drink the water unless it is treated. Exploration above the main grove leads to other groves, but the trail becomes very steep with plenty of boulders.

We’ve rated the difficulty for this hike easy, with 600 feet of elevation gain. Before you go, check to ensure the trail is open. More detailed information about the area can be found at Anza-Borrego Desert State Park.

In addition to desert bighorn sheep, the area is home to a diverse variety of plant and animal life. The canyon was named for the native California fan palms, which are a remnant from a cooler, wetter climate before the desert evolved in this area. Palm trees are found predominantly in the western canyons of the park where water is close to the surface. Palms must have their “feet'' in water to survive in desert heat as they have very large leaf surfaces that are a constant source of evaporation. Palm trees are an indicator of water at either the surface or just below the surface as they have a very short root system.

If no water is readily available, coyotes (Canis latrans) will dig for it near palm trees, and they also eat palm fruit. Western yellow bats (Lasiurus xanthinus) roost exclusively in the skirts of dead fronds encircling fan palms, which limited their distribution until palms became popular in landscaping. A medium sized-bat, the western yellow bat is indeed yellowish and has short ears.

During the wildflower season (usually March and April), there may be a profusion of colorful blooms from both annuals and perennials that might include six species of phacelia, chuparosa, indigo bush, apricot mallow, desert-willow, Palmer’s locoweed, ocotillo, pygmy gold-poppy, California fuchsia, and Bigelow’s monkey flower. Two annuals that can be found in the sandy wash and any dune areas are desert sand-verbena (Abronia villosa var. villosa) and dune evening-primrose (Oenothera deltoides subsp. deltoides). The desert sand verbena is found in the park and Borrego Valley and is recognized by its purplish golf-ball-size clusters of flowers. They have a nice scent, but you will have to get your nose to the ground to smell them. The dune evening primrose also creeps along in the sand, growing stalks that emerge from a basal rosette. The large four-petaled white blooms grow at the end of the stalk and turn pink once they have aged. After the plant has gone to seed, the stems curl upward, taking the shape of a birdcage, hence having one of its common names, the birdcage evening primrose. This is another plant with a sweet smell that attracts pollinators. Note that the well-publicized “superblooms” typically happen only after a particularly wet winter.

Borrego Palm Canyon was a home to Kumeyaay ancestors for a good reason. It offered shade, water, and plenty of resources for food including mesquite beans, desert agave, and cactus fruit. Shelter and bow-making resources included desert-willows, palm trees, and ironwood. Creosote bush and sage had medicinal uses, and plenty of granitic rocks made it easy to grind seeds near the source of food. You can look for grinding areas on rocks during the hike.

From S-22 in Borrego Springs go west on Palm Canyon Drive for 0.2 mile. Turn right into the entrance to the Borrego Palm Canyon Campground (if you reach the Anza-Borrego State Desert Park Visitor Center, you have gone too far). Drive to the west end of the campground and park in the day use parking lot. There is a $10 day use fee per vehicle. GPS: N33.27106, W116.41746