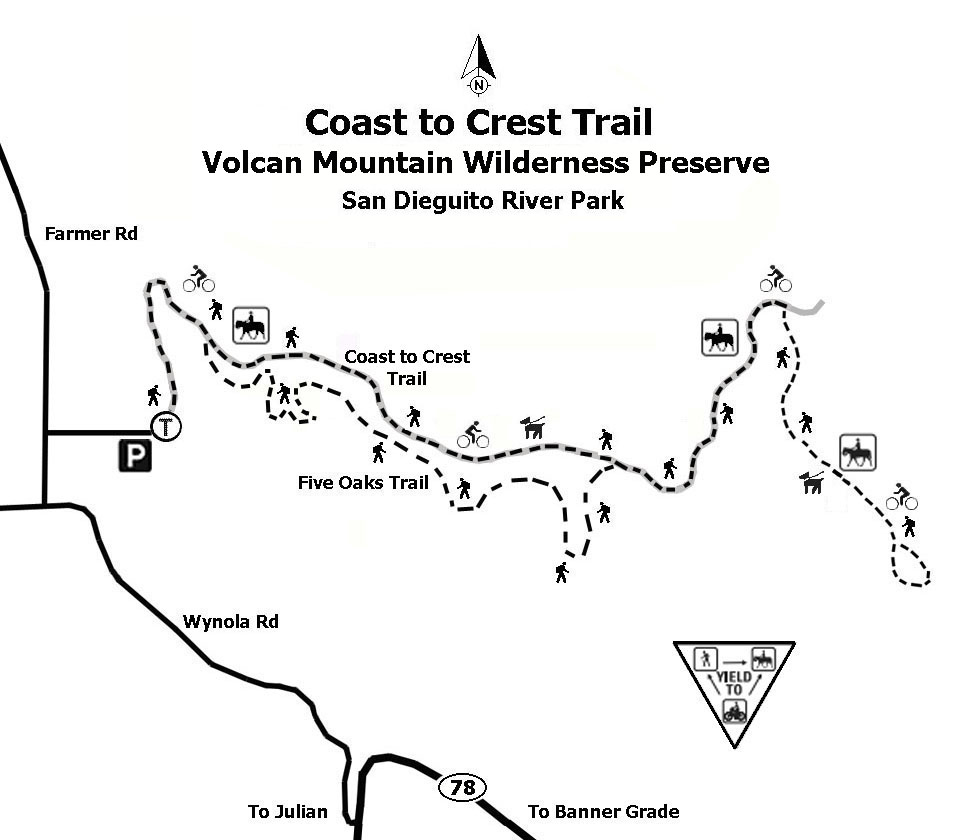 Volcan Mountain is part of the Peninsular Ranges, which include the beautiful Palomar, Cuyamaca, Santa Rosa, and Laguna mountains in San Diego. There’s lots of flora and fauna to see and plenty of history to learn about the area, too. The mountain is also the fountainhead for two of the county’s primary waterways: the San Dieguito and the San Diego river basins.

The San Diego gold rush started in 1870 on the southern flank of Volcan Mountain. A cowboy named Fredrick Coleman noticed yellow flakes in a small creek while watering his horse. Coleman was one of several Black Americans who made significant contributions to the early “gold rush” in Julian. That rush was enough to create a town that for years was the largest in the county. Today, however, the San Diego region is better known for gems and minerals, especially tourmaline and garnet.

The 2,900-acre Volcan Mountain Wilderness Preserve offers a mid-summit hike of 3.2 miles and a summit hike of 5.4 miles, both with viewpoints following multi-use trails. Follow the fire road for a third of a mile. Then turn right onto the Five Oaks Trail, named for the number of oak species that were recorded on this trail at one time (there are now at least eight species recorded in the area).

Know before you go:
We’ve rated the difficulty for this hike moderate , with elevation gain/loss from 1,000 – 1,300 feet. Bicycles and dogs are allowed on some trails. Before you go, check to ensure the trail is open. More detailed information about the area can be found at Volcan Mountain Wilderness Preserve . If you have time, stop by the Volcan Mountain Nature Center operated by Volcan Mountain Foundation volunteers. The foundation owns 400 acres adjacent to the preserve at 22850 Volcan Road in Julian.

Volcan Mountain’s location makes the view from the top simply breathtaking. On a clear enough day, you can see features in five counties, two states, two countries, on two tectonic plates. You can see two major bodies of water and an aerial view of at least seven habitats! Phew...

The climb to the summit area is particularly stunning in spring when native cream cups (Platystemon californicus) are in bloom and drape the area in a blanket of whitish-yellow blossoms. Cream cups, which are in the poppy family, have six petals and are slightly hairy.

You’ll find history all along the way, too. Be on the lookout for a lone chimney—all that is left of an observation outpost from 1928-1932 when astronomers were evaluating areas for placement of the Hale telescope that now sits on Palomar Mountain. The remains of an Airway Light Beacon System are also found at the summit. Originally developed by the U.S. Post Office Department, it was used by airmail pilots to direct them along major flight paths across the United States. By 1946, over 2,000 beacons were in operation serving 24 airways across the country. By 1972 the light beacons had become obsolete due to rapid changes in technology.

Keep your ears open for the “whack-up, whack-up” call of the acorn woodpecker (Melanerpes formicivorus). Besides eating acorns or pine nuts that it stores in granary trees, the acorn woodpecker has a varied diet that includes fruit, flower nectar, seeds, or occasionally lizards. It will also eat insects—if you’re very lucky, you’ll see the bird catch an insect mid-flight. This woodpecker is very territorial with one individual in the group standing watch against thieves who might steal from their stashed hoard. Their breeding behavior is a bit complicated and also communal with multiple males and females combining efforts to raise young in a single nest.

From CA-78 in Julian take Main Street north out of town for 2.2 miles (Main St. becomes Farmer Road). Turn right on Wynola Road. Go 100 yards and then take the first left, which is a continuation of Farmer Road. The preserve entrance is on the right, park on the shoulder of the road. GPS: N33.10511, W116.60242