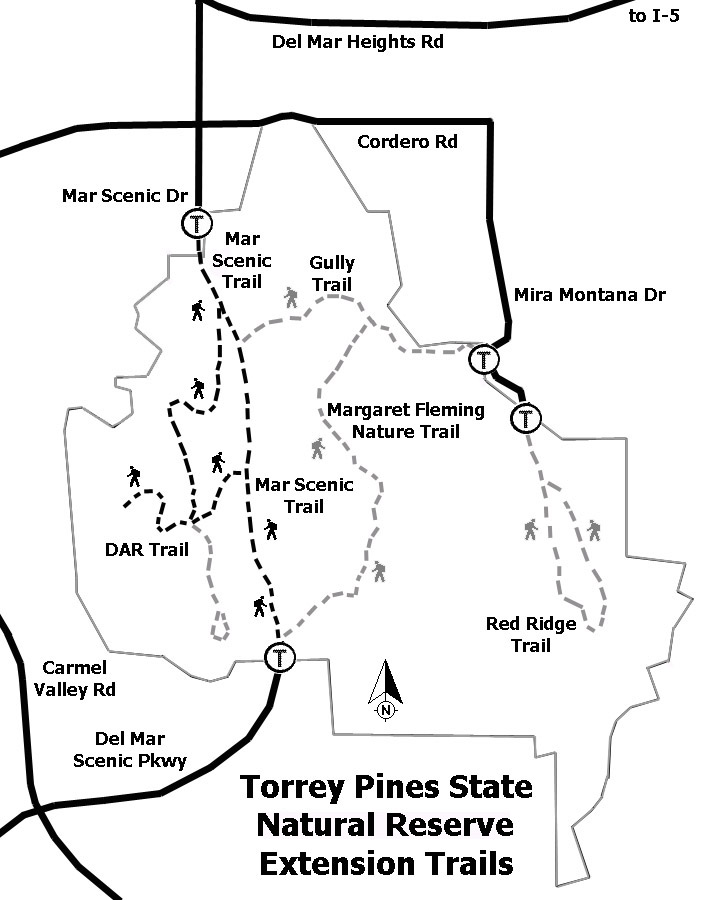 San Diego is a unique and exciting city for many reasons, and the remarkably rare Torrey pine (Pinus torreyana) is near the top of that list. Indeed, most San Diego residents can probably tell you where to find it, whether or not they realize the tree’s uniqueness. That’s because the well-known Torrey Pines State Natural Reserve between La Jolla and Del Mar offers beautiful ocean vistas, secluded hiking, and, of course, plenty of opportunities to see Torrey pine trees in their natural habitat. Slightly less famous, but equally worthwhile, is the Torrey Pines State Reserve Extension, located just across Los Peñasquitos Lagoon from the main reserve. These less-traveled extension trails offer spectacular pine specimens as well as a rich collection of other coastal sage scrub and chaparral plant life.

While a stroll through either the main reserve or the extension may convince you that the magnificent Torrey pine is relatively abundant, it in fact occurs nowhere else in the world except on a thin strip of coastline south of Del Mar and a tiny fragment on Santa Rosa Island of the Channel Islands. Indeed, with only a few thousand individuals in the wild, the Torrey pine is considered fairly endangered by the California Native Plant Society. It is a perfect example of why San Diego is globally known as a “biodiversity hotspot,” a region with very high numbers of plant and animal species, particularly endemics, or species that occur nowhere else.

Before you go, check to ensure the trail is open. Visit the Torrey Pines State Natural Reserve website to learn more.

The dry, sandy soils favored by the Torrey pine are also preferred by a variety of other San Diego natives. This coastal sage scrub habitat is rich with wildflowers, various shrubs, and, as the name suggests, sage. Both white (Salvia apiana) and black sage (Salvia mellifera) can be found here, as well as the unrelated (except in smell) coastal sagebrush (Artemisia californica). Both black and white sage occur in the mint or Lamiaceae family while sagebrush belongs to the sunflower or Asteraceae family. Most species in the mint family can be identified by square-shaped stems and opposite leaves. While these three species are drought deciduous, coastal sagebrush is perhaps the most sensitive to moisture, readily shedding its wispy leaves and re-growing new foliage in response to the rainfall or fog regimes. Black sage falls in the middle of sagebrush and white sage in terms of its susceptibility to shed leaves. White sage is fairly tolerant to changing moisture along the coast, retaining most of its leaves even in the summer sun. This species can also be found in San Diego County’s desert transition areas between chaparral shrublands and desert vegetation, while sagebrush and black sage remain more coastal. The whitish, lightly gray-green leaves of white sage are an adaptation to dealing with the sun, reflecting the sun’s rays via the albedo effect—the lighter the surface and the more white it has, the greater that the sun’s energy can be reflected back into space, and, as a result, lighter-colored leaves remain cooler than would dark green leaves.

White sage was traditionally used by local Native Americans for respiratory problems and as a topical disinfectant, anti-inflammatory, and as an antioxidant. It was used for spiritual cleansing and to mask human odors before hunting. The young stalks were eaten raw and the seeds were roasted and eaten. Crushed leaves and water were used as a hair shampoo, a dye for graying hair, and as a hair straightener. It also cured dandruff.

California poppy (Eschscholzia californica) blooms here in late winter/early spring, with many additional wildflowers blooming a bit later in the spring months. California poppy is of particular note, as it is California’s state flower. The bright orange blooms dot the landscape here and throughout much of the county during the spring months. The flowers in the Torrey Pines State Reserve areas have more yellow in their coloration than elsewhere in the county. While a pleasant sight here in California, outside of its native, coastal range from western Oregon to Baja California, this species is a problematic invader in Chile and elsewhere in the world.

Begin the extension trail at the end of Del Mar Scenic Parkway. The trail forks early and turning right will follow the Margaret Fleming Nature Trail to explore the east side of the wide basin. The 0.5 mile trail climbs sandy bluffs overlooking the entire basin and continues on to Mira Montana Drive. The north and west side of the reserve is explored by turning left at the fork and following the Mar Scenic Trail, which climbs to the other side of the basin and terminates at Mar Scenic Drive. The excellent Daughters of the American Revolution (DAR) trail can be accessed from this trail as well. Follow it along a ridge dotted with gnarled Torrey pine trees to access spectacular views of Los Peñasquitos Lagoon and the open ocean. A short offshoot trail also descends from here into a pleasant, shaded pine grove.

Note that you can make a second loop from the trailhead by using the residential street Mira Montana Drive at the east end of the Margaret Fleming Nature Trail. Head north to Cordero Road and turn left (west) five blocks to Mar Scenic Drive, where you turn left (south) again to the Mar Scenic Trail that can be followed back to the trailhead at Del Mar Scenic Parkway.