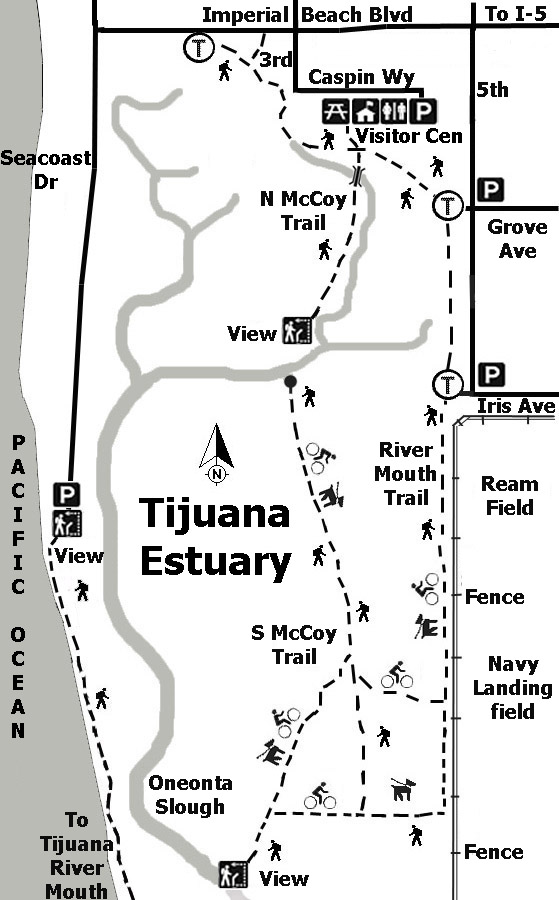 The Tijuana Estuary is one of the few estuaries in southern California that has natural, daily tidal flushing that enables this wetland to be among the most biologically productive systems. The trails described are in the north section of the Tijuana River National Estuarine Research Reserve, one of 35 designated “Wetlands of International Importance.” The trails are well marked and easy to follow. Trails are laid out to protect the multiple habitats that include salt marsh, coastal sage scrub, maritime succulent scrub, dunes, and riparian. These differ in amount of water, salt content, and soil types. Inches of elevation can also add to the habitat differences where indicator species differ from one section to another. Margins of habitats are active as different food sources attract multiple birds and insects. Knowing bird feeding preferences, nesting sites, and behavior improves enjoyment of this wetland.

The visitor center has a stand with free maps and pamphlets to browse plus current information on any scheduled walks or updates in the area. Just south of the center is a native plant garden that includes salt heliotrope, coast California buckwheat, coastal sagebrush, and lemonadeberry. The path southwest of the center has a view of the wooden trestle that is all that remains of the structure built after WWII to support a sewer outfall pipe to the mouth of the river when the military used the area for coastal defense.

Before you go, check to ensure the trail is open. Visit the Tijuana Estuary website to learn more.

Walk south on the North McCoy Trail named after Dr. Mike McCoy who along with biologists Joy Zedler and Paul Jorgensen worked to build support to preserve the estuary in 1971. Pass over the bridge and notice two plants—Pacific pickleweed (Salicornia pacifica) and alkali-heath (Frankenia salina)—that tolerate the high salt content of the marsh, referred to as halophytes. The pickleweed has segmented fleshy stems that store the salt until concentrated and then break off when full. The flowers are very small and yellow in color with the leaves reduced to scales. The salty stem is known as a sea bean or sea asparagus and is valued for its culinary flavor. It is really not a bean but a succulent and is served in some restaurants. The alkali-heath shrub has a woody base with leaves that tend to roll under and tiny pink flowers. It grows on alkali flats or in salt marshes and excretes salt. Watch for egrets, curlews, and black-crowned night herons (Nycticorax nycticorax) feeding along the inlets. This black-headed bird is the most widespread heron in the world. Compared to other local herons, it is stocky with short legs, and it hunts at dusk and night.

Backtrack over the bridge, turning east then south along houses and an active naval aviation training facility. Continue on the River Mouth Trail to the end, then west at the water to view shorebirds. The reddish egret (Egretta rufescens) is uncommon but entertaining, dancing and darting erratically as it feeds.

Return to your car then drive to Imperial Beach Boulevard, turning right to Seacoast Drive until the end and park. Along the east side of the street, there are small patches of salt marsh bird’s beak (Chloropyron maritimum), an endangered annual hemiparasite that is only found in 10 locations. As a hemiparasite, it can photosynthesize but takes mineral nutrients by parasitizing plants around it. Look for plants with purplish leaves.

Continue down the road to the viewing deck, then cross to the Pacific Ocean shore, and turn south to the Tijuana River mouth to watch the birds. It was here that from 1930 through the 1950s that Alan “Dempsey” Holder pioneered California big-wave surfing over 1 mile from the shore. A 9- to10-foot surfboard was used at that time until pollution and flooding affected the area. Backtrack to return to your vehicle.

From I-5 go west on Coronado Avenue (not the Coronado Bridge) and continue onto Imperial Avenue. After 2.7 miles, turn left on 3rd Street. Follow 3rd Street to Caspian Way and turn into the visitor center parking lot on right. Trailhead GPS: N32.57485, W117.12593