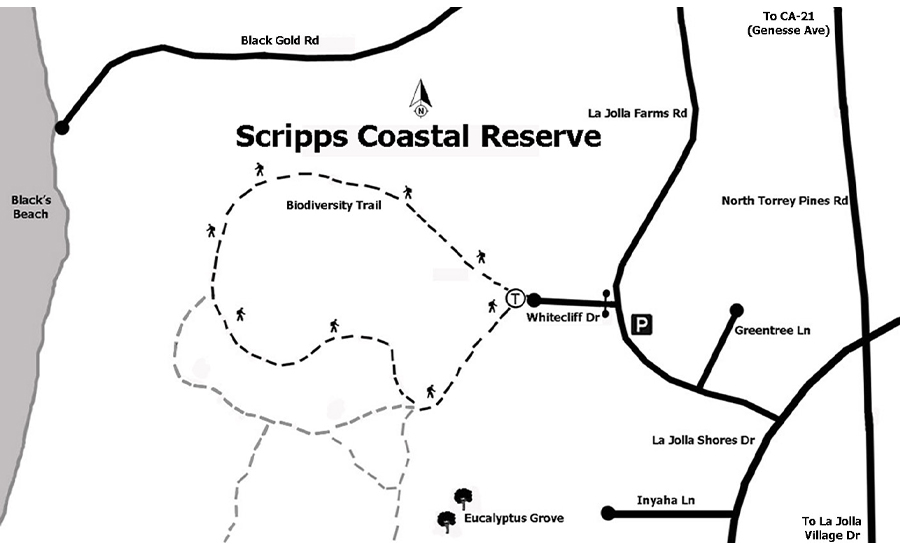 The Scripps Coastal Reserve or “The Knoll” offers spectacular views of the Pacific Ocean from coastal bluffs and an easy walk through coastal sage scrub habitat. It is part of the Natural Reserve System owned and managed by the University of California. The Scripps Coastal Reserve aims to provide a dedicated space for scientific research, education, and public service, contributing to stewardship and understanding of California’s diverse ecosystems. The Biodiversity Trail offers an easy walk, with many signs posted along the trail informing visitors of the area’s natural history, including plant and animal life and geology.

This route begins by walking through areas dominated by coastal sagebrush and California encelia or bush sunflower. Along the trail, you'll eventually want to look inland to see an area under various stages of restoration. Over 80% of original coastal sage scrub was lost by 1980 to agriculture and urbanization, with remaining fragments facing pressure from invasion by non-native plant species. Look for baby shrub seedlings that have been planted in areas where exotic plants have been removed, but please stay on the main path so as not to hinder their establishment.

Follow the trail to the edge of the cliff where you will be rewarded with a commanding view of the Pacific Ocean, including the surf break at Black’s Beach north of the overlook. A paved road offering pedestrian access to Black’s Beach can be found further north of the reserve, past Black’s Canyon, but there is no beach access from the Biodiversity Trail. The view to the ocean will be overlooking the Scripps and La Jolla submarine canyons, which plunge to over 2400 feet below the surface. Looking down between the overlook and the Scripps Research Pier, an exposed rocky intertidal zone at Dike Rock can be seen when water is left behind in pools at low tide.

We’ve rated the difficulty for this hike easy, with minimal elevation gain. Before you go, check to ensure the trail is open. More detailed information about the area can be found at Scripps Coastal Reserve.

There are lots of seasonal phenomena to be observed here, and lots of invasive dangers to our ecosystem too.

Coastal Sagebrush (Artemisia californica) and large stands of California encelia or bush sunflower (Encelia californica) bloom in great abundance from January to March. Both are in the sunflower or composite family Asteraceae. Large marine life, such as gray whales, often take advantage of the deep waters off the coast during their yearly migrations. Keep a lookout over the water from December to April as these mammals migrate from breeding to foraging grounds.

Invasive plant species of particular concern you can recognize here include crystalline ice plant (Mesembryanthemum crystallinum), which is notable for the water “bubbles” covering this prostrate succulent with red-tipped leaves. Another concern is black mustard (Brassica nigra), which produces allelopathic chemicals that prevent native plants from germinating. Various invasive grasses spread rapidly into various habitats where they increase fire frequency and convert native habitats into grasslands. These invaders can change habitat suitability for vertebrate and invertebrate species, displace native plants, and also affect other ecosystem services such as carbon storage and erosion control.

As you return inland, look for a large coast bladderpod (Peritoma arborea) that has a yellow bloom all months of the year on which often found is a red-throated, year-round resident of San Diego County—Anna’s hummingbird (Calypte anna). Upon closer inspection of the coast bladderpod, there are likely harlequin bugs (Murgantia histrionica), members of the stinkbug family with bright orange markings on their black back. The harlequin bug can spend its whole life on one plant. When threatened, they will drop to the ground and feign death. So, try not to startle them.

Closing the loop to the trailhead, notice the coast barrel cacti (Ferocactus viridescens var. viridescens) tucked beyond pockets of coastal sagebrush, many of which were saved and transplanted from area developments. Barrel cacti are often visited by native ant species for both protection and pollination. One species, the California carpenter ant (Pogonomyrmex californicus), in turn, is an important food source for the well-camouflaged, Blainville’s horned lizards (Phrynosoma blainvillii). Unfortunately, both the California carpenter ants and the horned lizards are disappearing, in part, because of the invasion of the very aggressive Argentine art (Iridomyrmex humilis) that will destroy other ant colonies. The California carpenter ant is the primary food for the horned lizard, who does not care for Argentine ants. In fact, the Argentine ants will attack the horned lizard in large swarms.

In less terrible news, restoration and conservation efforts at The Knoll have resulted in several nesting pairs of the federally threatened California gnatcatcher (Polioptila californica), whose habitat is limited to coastal sage scrub. This small gray songbird does indeed eat tiny insects. Listen for its cat-like call.