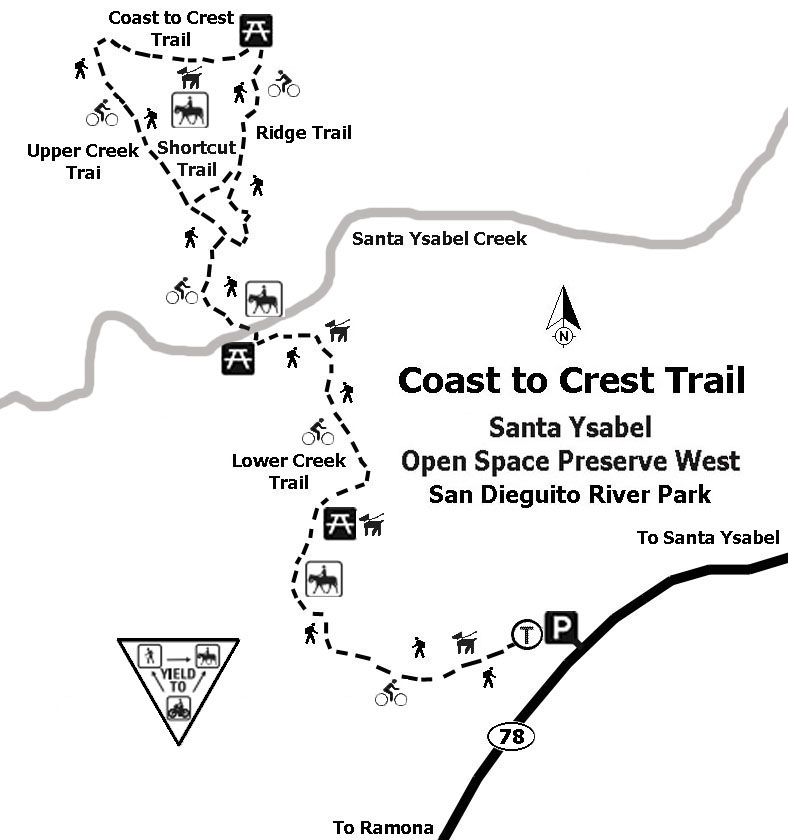 Take a deep breath as you wander through these grasslands and glimpse into the backcountry world of San Diego almost 200 years ago. Santa Ysabel Preserve is within the San Dieguito River watershed. The land on both sides of CA-79, just north of Santa Ysabel, was acquired by The Nature Conservancy in 1999 to protect its various habitats and large animals, such as deer and mountain lions.

From the trailhead, follow the Lower Creek Trail 1.84 miles to a junction with the Upper Creek Trail and the Ridge Trail. This is a loop trail so either direction is delightful. Both trails lead to the east-west connection with the Coast to Crest Trail. As of this writing, the connecting routes for the trail have not been established yet. However, bicycles, leashed dogs, and horses have access to this small segment of the trail because the preserve also has multi-use trails.

All trails within the preserve are well marked and signed. There is also a Shortcut Trail between the Ridge Trail and the Upper Creek Trail that can make another short loop. Santa Ysabel Creek runs along the northern boundary of the preserve near the Coast to Crest Trail.

Before you go, check to ensure the trail is open. More detailed information about plants, wildlife, history, and geology of the area can be found at Santa Ysabel County Preserves.

The preserve has many oak trees—both Engelmann’s and coast live—surrounded by grasslands. Within the grasslands may be fields of flowers, especially in spring, with patches of coastal sage scrub accompanied by buzzing bees. Numerous bird species are also present. It also has expansive views of the mountains off in the distance where turkey vultures (Cathartes aura) may be seen in the sky.

A number of colorful smaller birds make their home in the open grasslands. Some just migrate through, others are winter-only residents, while others can be found here year around. You can find Say’s phoebes (Sayornis saya) in winter and increasingly in spring, lark sparrows (Chondestes grammacus), and greater roadrunners (Geococcyx californianus) can be spotted in open areas, running to catch their preferred food—lizards and snakes. The roadrunner is one of the few birds that will attack and kill rattlesnakes. Among the winter visitors are mountain bluebirds (Sialia currucoides). They are irregular visitors. In some years few or none arrive, while in other years several hundred may be found in the tall grass.

As an extra note, the primary use of these preserve lands in the late 1800s was for cattle grazing. Today you may still encounter free range cattle, but don’t approach young calves. Their mothers are very protective.